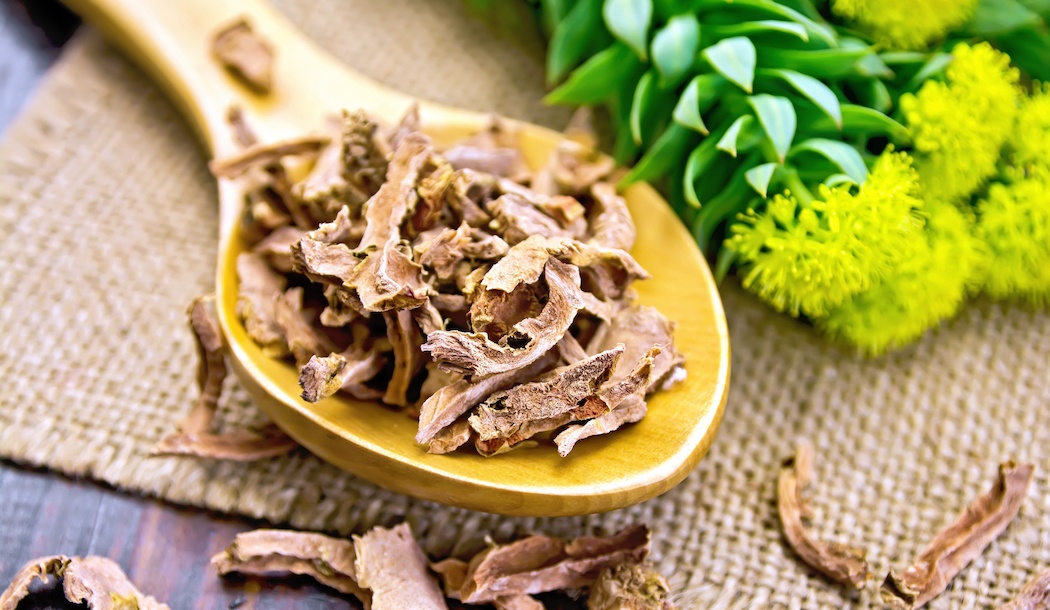 People living in the Altai Mountains in Siberia so valued an herb for increasing energy and stamina that it became well-regarded across the Soviet Union in the 1940’s.

Eventually, the Soviets supplied this herb to their athletes, soldiers and astronauts to boost energy and reduce physical and mental fatigue.

Modern day science shows they were on to something. This herb called Rhodiola not only increases physical energy, but it can also help treat a number of health conditions, including cancer.

Sometimes known as “golden root,” Rhodiola rosea L grows well in cold temperatures, low oxygen, and intense sunlight. That’s why you’ll find it in mountainous regions around the world, including North America. The herb grows up to 2½ feet in height and produces yellow blossoms.

To protect itself and flourish in these unfavorable environments, Rhodiola produces powerful compounds that have been shown to protect the health of the human body.

The first use of the herb as medicine was recorded by the Greek physician Pedanius Dioscorides in his medical manual, De materia medica two thousand years ago. More recently, Rhodiola has been used in the traditional medical systems of Russia, Asia, Scandinavia and other European countries.

In traditional folk medicine, Rhodiola root is used for treating everything from fatigue and depression to impotence and tuberculosis. Folk healers in Mongolia were among the first to use it to treat cancer.

Although there are a very large number of Rhodiola species, R rosea is by far the most well-researched, and of the 140 compounds that have been isolated, it contains three that set it apart from other Rhodiola species.

These pharmacologically active components are rosarin, rosavin, and rosin, which together are called rosavins. Another active compound found in rosea and other species of Rhodiola is called salidroside.

Standardized extracts of R rosea used in dietary supplements usually contain three percent rosavins and one percent salidroside but these these percentages can be higher than this.

In modern day medical research, a standardized extract of Rhodiola called SHR-5 is often used. This extract contains 4.5 percent of total rosavins and 1.7 percent of salidroside.

Many of the other compounds found in the plant such as flavonoids, terpines and phenolic acids may also individually account for some of its health benefits or they may act in synergy with the known active components to increase the body’s resilience to stress.

Russian scientists describe R rosea as an adaptogen, which means it provides nonspecific resistance to physical, emotional, chemical and biological stresses. Adaptogens allow the body to minimize negative reactions that come with chronic stress, a risk factor for cancer and its progression.

Studies demonstrate that plant-based adaptogens can also reduce the risk of cancers through multiple mechanisms which are often linked to activating many aspects of the immune system. These include antioxidant, anti-inflammatory, anti-viral, immune stimulating and DNA repair enhancing mechanisms.

Hundreds of studies have been conducted with R rosea over the last 60 years including research into cancer.

For example, researchers from the University of California, Irvine demonstrated that SHR-5 selectively inhibits the growth of bladder cancer cell lines with minimal effect on non-malignant bladder cells.

The researchers report that this effect came about through three mechanisms of Rhodiola. First, the herb inhibited a signaling pathway called mTOR, which plays a central role in cancer initiation and progression. Second, it induced autophagy, a process that suppresses tumor growth by inhibiting cancer-cell survival and inducing cell death.

In spite of the benefits seen in cellular research, there are only a limited number of animal studies.

In a mouse model, angiogenesis – blood vessel growth which allows cancer cells to spread to other tissues – was induced by transplanting sarcoma cells into the skin. An extract from a different species called R quadfida, together with salidroside, “highly significantly decreased” angiogenesis.

In a rat model of transplanted adenocarcinoma (cancer that forms in mucus-secreting glands) and lymphosarcoma (a form of leukemia), Rhodiola rosea extracts inhibited cancer cell growth, decreased spread to the liver and extended survival time.

In addition, Rhodiola rosea root extract enhanced the anti-tumor and anti-metastasic effect of a chemotherapy drug as well as reduced drug-induced toxicity in mice with transplanted tumors.

In a mouse model of bladder cancer, SHR-5 was given to male mice in drinking water starting at six weeks of age and ending at six months of age. About 42 percent of mice given normal water died within six months, while 93 percent of the SHR-5 mice survived.

Plus, the bladder weights of the male and female mice drinking SHR-5 decreased by 69 percent and 40 percent, respectively, compared to the control group.

Interestingly, the researchers also tested the diabetes drug metformin in a third group of the mice. This drug is used by some integrative oncologists because it has demonstrated strong anti-cancer activity. SHR-5 outperformed metformin.

In addition, salidroside treatment significantly suppressed tumor growth in a mouse model of breast cancer. The researchers concluded that “these findings suggest that salidroside may be a promising candidate target for the prevention and treatment of human breast cancer.”

In spite of the very many benefits seen in clinical research, the only human study was carried out in Russia in 1995. It showed that 12 patients with superficial bladder cancer taking Rhodiola rosea extract by mouth reduced frequency of relapses by half.

University of California, Irvine scientists, in reviewing the herb, concluded that “Rhodiola rosea extracts and salidroside are unique chemopreventive agents, which not only have anti-cancer and anti-inflammation activity, but also strengthen or stimulate normal physiological functions, such as immunity, stress response and DNA repair.

“Rhodiola rosea extracts and salidroside could confer cellular and systemic benefits of metabolism similar to the effect of positive lifestyle interventions.”

Although the herb seems to have a good deal of potential to prevent and treat cancer, no human trials are planned—and this isn’t surprising. The conventional cancer treatment industry focuses almost exclusively on drug treatments while ignoring or even banning natural treatments, regardless of their success rate.

But doctors in other areas of medicine are already turning to Rhodiola for its incredible adaptogenic health benefits. There are human clinical trials either planned or in progress to see if Rhodiola rosea can help with ADHD, depression, fatigue, exercise performance, coronary artery disease, angina, and obstructive sleep apnea.