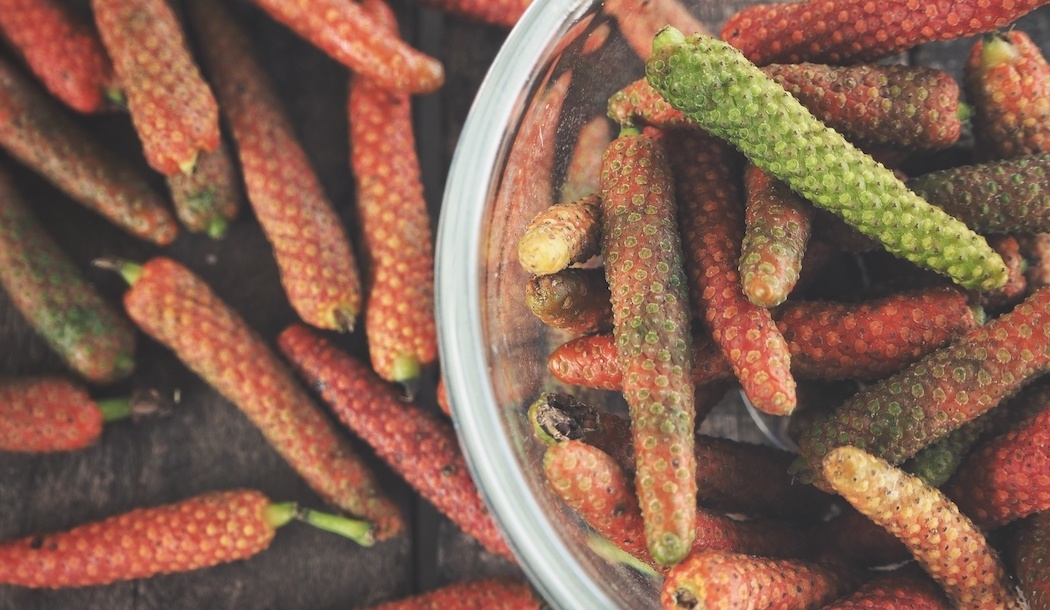 With its combination of sweet and savory flavors, this spice works well in stews, soups, vegetable dishes, desserts, and dry rubs on joints of meat.

It can even be used in place of black pepper for those who want a more complex flavor with a bigger kick to it.

And yet, though you can find a vast range of spices in most supermarkets, you’re not likely to find this one.

The heyday of the Indian long pepper ended centuries ago, but it’s now enjoying a revival thanks to the many ways you can use it in foods AND its medicinal properties.

Most exciting of all, there’s a new discovery: it helps fight cancer. . .

Indian long pepper is a flowering vine cultivated for its fruit, which is either ground up and used as a culinary spice or as a medicine. In addition to the fruit, you can also use the plant’s stem, root, and the oils extracted from the fruit in healing.

The first reference to long pepper (Piper longum), also known as pippali, can be found in Ayurvedic texts. As you probably know, Ayurveda is the powerful mind-body health system put together by the sages of India many centuries ago.

The texts describe both dietary and medicinal uses for the spice. It was “considered destructive of phlegm and wind; being pungent and hot, it is capable of increasing the semen.”

Practitioners of Ayurveda still use it liberally today because it helps treat a wide range of conditions.

As you might guess from the mention of phlegm, it’s prescribed for coughs, colds, congestion and other respiratory disorders. It’s also used for digestive disturbances, reproductive issues, problems with the nervous system, and diseases of the liver.

Its reputation spread beyond India and was taken up by practitioners of traditional Chinese medicine, Tibetan medicine and Latin American folk medicine.

The active ingredient is. . .

Scientists identified and isolated the main active ingredient in long pepper, piperlongumine, in 1967. Since then, laboratory studies have confirmed many of its pharmacological effects.

Different groups of Brazilian scientists found it could inhibit the aggregation of platelets by 30% to potentially prevent blood clots. Another study showed it alleviated anxiety and depression, and a third study revealed it’s a pain reliever.

A research team from Georgia Institute of Technology and Emory University, Atlanta found piperlongumine had profound benefits for the cardiovascular system by inhibiting the formation of plaques in the arteries and the proliferation of vascular smooth muscle cells.

Two research teams from India discovered the long pepper extract acts as an anti-diabetic agent and inhibits infections, while another from Korea found anti-inflammatory properties which would make it useful “as a therapy for vascular inflammatory diseases.”

Although the anti-cancer properties of piperlongumine had been studied for some years, it took until 2011 for the search to really catch fire.

This occurred because of a study published in Nature carried out by 14 researchers from the Broad Institute at MIT and Harvard. Using lab cultures, they found this substance is more effective against breast cancer cells than the chemotherapy drug Toxol. They also discovered why this was so.

Cancer cells have very high energy demands. As their metabolism revs up to meet this demand, so does the production of free radicals or reactive oxygen species (ROS). These need to be quenched by antioxidants before they damage the cancer cell, but the scientists discovered that the ingredient from long pepper blocks this process. This allows the free radicals to stay at high levels, eventually killing the cancer cells.

Normal cells are spared because they produce low amounts of free radicals. They don’t need high levels of antioxidant enzymes.

According to senior study author and professor of chemistry and chemical biology Stuart L Schreiber, “Piperlongumine targets something that’s not thought to be essential in normal cells. Cancer cells have a greater dependence on ROS biology than normal cells.”

Two of Prof. Shreiber’s fellow authors, Sam Lee and Anna Mandinova, were looking for a compound that would boost the tumor suppressor gene p53. Failures in this gene often play a role in cancer cases. They were surprised instead to find a process that was independent of p53 activity and didn’t harm normal cells.

Dr. Mandinova said, “The novelty of this compound was that it was able to recognize cancer cells from normal cells. It has a mode of action that targets something especially important to the cancer cell.”

Prevents growth and spread of tumors

Studies of the effect on lab-grown cancer cells are merely the first step. The research team went on to test piperlongumine in mice. They used both cancer cells and normal cells specially engineered to produce tumors.

They found that the long pepper compound inhibited growth in injected human lung, breast, bladder and melanoma cells. No toxicity was seen when piperlongumine was given to normal mice.

In what is seen as a much tougher test, they gave the compound to mice that spontaneously develop breast cancer. The herbal remedy blocked both the growth of the tumor and its spread. Taxol, the chemo drug, proved less effective even at high doses.

Unfortunately, a cloud hangs over these exciting results. Just a few months ago — seven years after the initial study — the scientists’ paper was retracted by the journal because of issues with several figures used in the report. In a rare split, nine of the authors accepted the decision while five believed this was not warranted.

Both MIT and Harvard issued a statement to say ” the scientific conclusions of the paper appear sound and its key findings have been extended by other investigators in independent publications.”

In other words, there’s no reason to believe piperlongumine is not everything the study suggested.

Over the last dozen years or so, various research groups have shown the compound is active against cancers of the lung, breast, ovaries, colon, prostate, brain, head and neck, pancreas and stomach as well as lymphoma and leukemia.

The long pepper extract is toxic to cancer cells through a variety of mechanisms. It activates proteins involved with cancer cell death and downregulates genes that prevent cancer cells from self-destruction. It blocks various signaling pathways used by malignant cells and interferes with cell division, growth and spread.

In 2017, an important study was published in the Journal of Biological Chemistry. It uncovered another interesting mechanism by which long pepper acts against cancer.

Using a technique called x-ray crystallography, researchers at The University of Texas Southwestern Medical Center were able to show that after it’s ingested, piperlongumine is converted to hydrolyzed piperlongumine.

This switches off a gene called glutathione S-transferase pi 1 (GSTP1) which produces a detoxification enzyme that is especially abundant in cancer cells, promoting tumor growth. Switching off GSTP1 leads to cell death.

The study was led by Kenneth Westover, Assistant Professor of Biochemistry and Radiation Oncology. He believes that after further work piperlongumine can be developed into a more potent drug that can be used against many forms of cancer.

In his words, “This study illustrates the importance of examining and re-examining our theories. In this case we learned something fundamentally new about a 3,000-year-old medical claim using modern science.”

This sounds like a spice worth adding to your kitchen cabinet.

British TV chef Nigel Slater calls long pepper “the most beautiful spice of all.” He describes it as having a deeper and sweeter flavor that lends itself particularly to desserts. It seems odd to use pepper in a dessert, but that’s what the foodies are saying.

Long pepper can be found in dedicated spice outlets, Indian markets and online. It also comes, together with ginger and black pepper, in Trikatu, a classic Ayurvedic blend normally taken for digestive relief. Long pepper or pippali can also be purchased by itself in capsules.

I don’t know whether you can get a clinical dose of the piperlongumine molecule by eating long pepper once in a while in your food. It seems unlikely, and anyway it hasn’t been established what a clinical dose for humans would be. For now, I view this as one more healthy and delicious food that’s good for you, too. Hopefully we’ll hear more about it in the future.