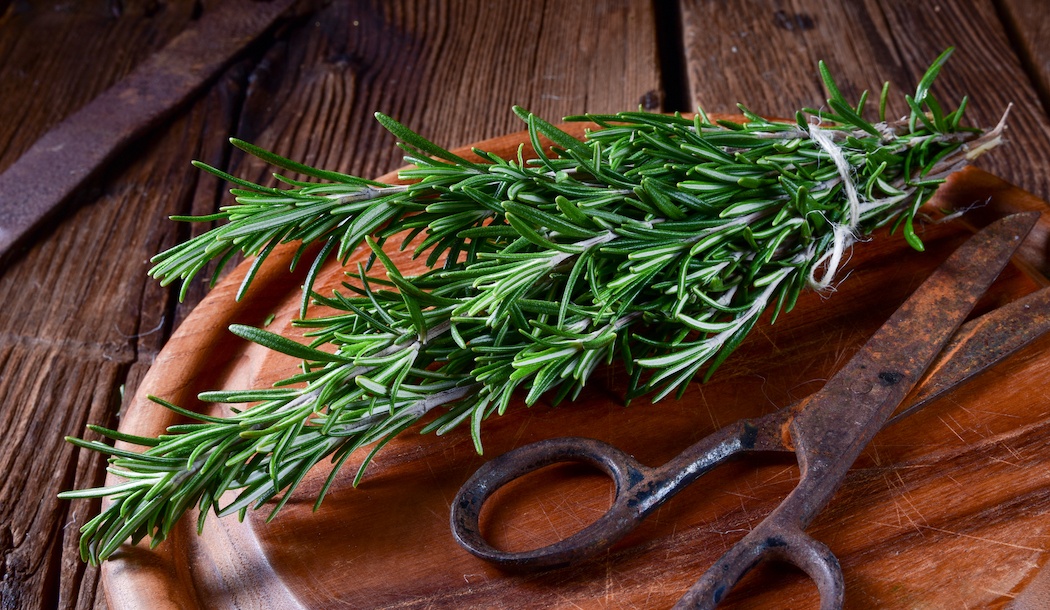 The Mediterranean diet reduces the risk of many forms of cancer as well as lowers the risk of dying from the disease.

To discover the reason, research has focused on the variety of anti-inflammatory foods— from omega-3 rich fish, nuts and seeds to olive oil and fresh vegetables and fruit.

But the Mediterranean diet also includes generous amounts of herbs which many cancer researchers believe could also play a big role in defending against cancer. One herb in particular is at the top of their list…

I’m talking about rosemary. The herb contains many compounds with anti-cancer activity, one of which has caught the attention of scientists.

The rosemary plant is native to the Mediterranean region and its culinary and medical uses can be traced back to ancient Greece over two thousand years ago.

Traditional medicinal herb with many uses

The plant contains many health protecting compounds, four of which stand out for their anti-tumor effects. These are carnosic acid, carnosol, ursolic acid, and rosmarinic acid. The one that’s exciting scientists the most is carnosol.

Scientists first isolated carnosol in 1942 and discovered its chemical structure in 1964. Carnosol is part of a class of chemicals called diterpenes, which show “remarkable biological activities.”

Diterpenes have antimicrobial, antiviral, antifungal, and antiparasitic properties and can lower elevated blood fats and blood sugar. Studies performed two decades ago revealed they can also fight cancer. Since then, researchers have demonstrated their ability to act against many different forms of cancer.

A review of carnosol published in 2011 described it as “a promising anti-cancer and anti-inflammatory agent.” Researchers explained how carnosol acts on multiple pathways and molecular targets associated with inflammation and cancer. For example, studies in laboratory animals and cell cultures reveal that carnosol can:

What’s more, carnosol was well tolerated when administered to laboratory rodents, with no dangerous side effects.

Protects against many forms of cancer

In mice given carnosol orally, tumor growth was suppressed by 36 percent and prostate-specific antigen (PSA) levels were lowered by 26 percent.

Colon cancer: Dietary administration of carnosol in mice reduced the number of tumors per mouse by an average of 46 percent. It was also shown to prevent tumors in mice with a defective Apc gene, which increases the risk of colorectal cancers.

Breast cancer: Carnosol and carnosic acid – the precursor to carnosol – had toxic effects against four cell lines of breast cancer. Carnosol also prevented a toxic tumor promoter from inducing DNA damage and tumor formation in the rat mammary gland. When carnosol was administered through the abdominal wall it reduced DNA damage by a significant 40 percent. Injecting it by the usual route led to a 65 percent reduction. After 20 weeks it reduced tumor formation by 33 percent.

Skin cancer: An extract of rosemary containing ursolic acid, carnosol, and carnosic acid was given to mice just before being given toxins and a potent tumor promoter to induce skin cancer. This led to a reduction in tumors by 64 percent. Topical application also reduced inflammation and tumor promotion. Topical application of carnosol alone lowered inflammation and ODC, an enzyme highly expressed in inflammation and cancer. Carnosol also inhibited the number of tumors per mouse by 78 percent. The migration and spread of melanoma cells were also inhibited by carnosol.

Leukemia: Carnosol induced apoptosis in three cell lines but did not do so in healthy cells. It did so by targeting the anti-apoptotic members of the Bcl-2 family of proteins. Expression of these proteins was lowered by between 33 percent and 53 percent in the three cell lines.

A more recent review published in 2020 added lung, pancreatic and brain cancer to the list.

Pancreatic Cancer: Activation of the protein c-Met has been attributed to the low rate of survival and cancer relapse. Carnosol inhibits c-Met to reduce the growth and migration of pancreatic ductal adenocarcinoma (PDAC) cells that lead to aggressive disease.

Unfortunately, this is not going to happen any time soon and probably not in the remainder of this decade.

Plant compounds are routinely put on the back burner when it comes to human cancer trials no matter how promising they show themselves to be in lab research. However, we don’t have to wait for clinical trials to get the benefit of carnosol.

Rosemary has many other health benefits

By adding rosemary to the diet, we not only consume carnosol, but the other three anti-cancer agents previously mentioned. And it’s only the beginning. We also get to enjoy the cancer fighting properties of caffeic acid, oleanolic acid, camphor, rosmanol, eugenol, and luteolin.

The benefit of these compounds go beyond fighting cancer, and together with many other chemicals found in the plant, provide us with multiple ways to keep healthy.

In a review of rosemary published in 2019, the researchers wrote that the plant contains compounds that have been shown to decrease the virulence of asthma, atherosclerosis, cataract, renal colic, liver toxicity, peptic ulcer, inflammatory diseases and narrowed heart arteries.

How to get the benefits of rosemary

Rosemary is a versatile herb, so its aromatic magic can be incorporated into the diet by adding it to soups, casseroles, stews, marinades, pasta sauce and salads. The herb goes well with a variety of dishes such as poultry, game, lamb, beef, pork, and fish, and combines well with grains, onions, mushrooms, peas, potatoes, and spinach.

Rosemary leaf extract is also available as a supplement, in tincture and capsule form for internal use, and in the form of an essential oil for inhaling and using on the skin.