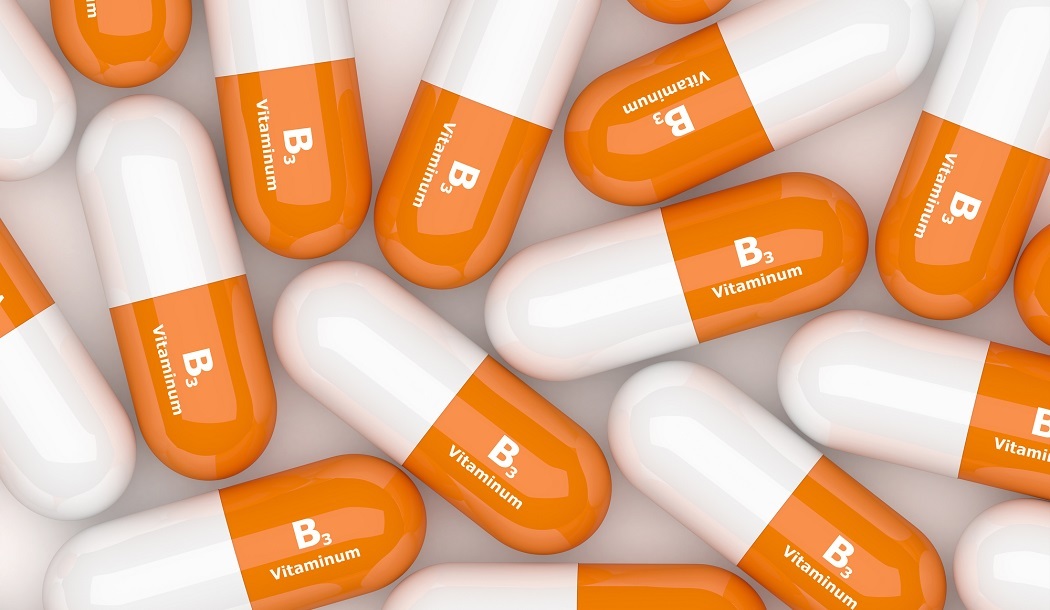 During the first half of the twentieth century, one illness killed over 100,000 Americans.

Thankfully, scientists found a cure by using brewer’s yeast. Later, they identified the active ingredient in the yeast and named it vitamin B3, or niacin.

Pellagra – a disease now largely forgotten – is caused by a vitamin B3 deficiency. Its symptoms include dementia, dermatitis and diarrhea. But the benefits of B3 go way beyond preventing pellagra.

The latest research into vitamin B3 examines its potential to prevent and treat cancer.

Your body gets vitamin B3 mostly from meat or fish, and it’s present in two forms with slightly different chemical structures: niacin and niacinamide.

When you supplement with niacin, which is also called nicotinic acid, it dilates blood vessels (if the dose is high enough) and this causes skin flushing. Niacor and Niaspan are high strength drug formulations of niacin that some doctors prescribe to improve cholesterol levels and reduce unhealthy blood fats.

Niacinamide, also called nicotinamide, does not dilate blood vessels. Supplement labels sometimes call it “no flush” niacin, because the flush bothers some consumers and they want to avoid it. It’s this amide form that’s mostly been the focus of research in cancer prevention and treatment.

Vitamin B3 only becomes metabolically active after it’s converted into nicotinamide adenine dinucleotide (NAD) within the cells. Over 400 enzymes depend on NAD, so the vitamin has a wide range of functions throughout the body.

Its principal role is to convert energy from food into ATP, the cell’s main energy source, but it also has other critical functions that are relevant to cancer.

For example, NAD influences mechanisms that maintain stability of the genome. Loss of stability leads to DNA and chromosome damage, a hallmark of cancer. NAD-dependent enzymes facilitate DNA repair, and NAD depletion decreases levels of the tumor suppressor protein, p53.

The research shows that, depending on the tumor type, vitamin B3 can promote cell cycle arrest and apoptosis (cell death), and suppress proliferation, invasion, metastasis and vascular mimicry (a method of supplying blood to tumors so they can grow).

The vitamin also has anti-inflammatory properties and can protect cells against the damage caused by free radicals (which as you know, leads to cancer).

How well does it work? I was curious as well.

One of the symptoms associated with pellagra is dermatitis. Its role in the skin, and its known ability to protect against UV radiation, led researchers to first study vitamin B3 as a possible therapy for skin cancer and actinic keratosis (AK), a skin condition that can lead to cancer.

Researchers have completed nearly 18 studies, with half of these carried out in human patients.

In 2015, a research group from the University of Sydney, Australia, enrolled 386 patients with an average age of 66 who had a history of skin cancer, and were therefore at risk of additional tumors.

Vitamin B3 was equally effective in both of the main forms of skin cancer, basal cell carcinoma and squamous cell carcinoma. Researchers found the supplement was safe and well tolerated by patients.

Diona Damian, a professor of dermatology and member of the research team, said, “This is the first clear evidence that we can reduce skin cancers using a simple vitamin, together with sensible sun protection. We hope that these findings can be immediately translated into clinical practice.”

Dermatologist Emily S. Ruiz, MD, MPH agrees. In 2018 she wrote in the Harvard Health Blog, “We recommended starting the vitamin (500 mg twice a day) to all our patients with a history of a basal cell carcinoma or squamous cell carcinoma, or with extensive skin damage due to sun exposure.”

A “promising” agent against melanoma

The University of Sydney carried out another study that included a review of lab studies that investigated the effects of vitamin B3 against the deadliest skin cancer of all, melanoma.

Scientists found a great deal of research demonstrating the vitamin protects the skin against the harmful effects of UV radiation. Based on all the positive data, they concluded that “it is a promising agent” for melanoma protection.

Prof. Damian, who was also involved in this study, commented, “Nicotinamide replenishes cells’ energy stores, which are depleted by UV exposure. This extra energy enables cells to repair any DNA damage more efficiently, and also helps to reduce the immune suppressive effects of sunlight on the skin.”

Vitamin B3 has also been tested in animal models in other forms of cancer. Scientists found it suppressed tumor formation in the bladder, lung, liver and kidney. It also reduced the incidence of non-lymphocytic leukemia.

One problem with many cancers is that they’re resistant to radiotherapy, especially if the tumors are poorly oxygenated (hypoxic). Some integrative doctors are now using vitamin B3 in a treatment called ARCON (accelerated radiotherapy with carbogen and nicotinamide) to help overcome this problem and improve the effectiveness of radiotherapy.

Carbogen, by the way, is a mixture of 98 percent oxygen and two percent carbon dioxide. It’s given to the patient by mask or via a tube through the mouth into the windpipe. The vitamin is added to the protocol because it enhances oxygenation and increases blood flow to oxygen deprived tumors.

Studies show ARCON is making a real difference in the lives of certain cancer patients.

For those with head and neck cancers, ARCON helped prevent the spread of new tumors. In bladder cancer patients, ARCON prolonged overall and recurrence-free survival in 333 patients with bladder cancers compared to placebo in a trial that lasted three years.

Doctors also tested ARCON in patients with lung or brain cancer. However, ARCON didn’t make a dramatic difference. Doctors theorized that this could be because the dosage used was too high, six grams a day, which caused nausea and vomiting in some of the patients.

Laboratory studies in ten different types of cancer also support the use of vitamin B3 in combination with chemotherapy.

The latest study was published in the journal Science Translational Medicine earlier this year by researchers from the University of Calgary, Canada.

The results in brain cancer are very encouraging.

The prognosis for glioblastoma, the most aggressive form of brain cancer, is very poor, with patients surviving about a year to 15 months.

Part of the reason for this is because a subpopulation of cells called brain tumor initiating cells (BTICs) have “stem cell-like” properties and just keep coming back after conventional treatments.

In addition, BTICs not only fend off everything the immune system has to throw at them, they use immune cells to their own advantage, reprogramming them to actually promote tumor growth instead of stop it.

Since brain tumor stem cells are very resistant to traditional treatment, the researchers chose to support the body’s immune system in the hope that beefed up immune cells would be able to mount a successful attack against the stem cells and destroy them.

When the Canadian research team screened 1,040 compounds that had a positive impact on immunity, a number of cellular experiments showed niacin activated key immune cells against glioblastoma and suppressed BTIC growth.

The next step involved implanting BTIC cells from human glioblastoma patients into mice and then treating them with niacin alone. This increased immune cell infiltration into the tumors, stimulated anti-tumor immune responses, and extended the animals’ survival.

When the researchers used the vitamin in combination with the chemotherapy drug temozolomide, they achieved even better results. The lifespan of mice nearly quadrupled, increasing from 40 days to 150 days.

“It is a remarkable result,” explained Dr. Wee Yong, the lead investigator. “While it’s not a cure, it’s a promising step forward against this incurable disease.”