Beware of Foods that Look Too Pretty - Cancer Defeated

Beware of Foods that Look Too Pretty 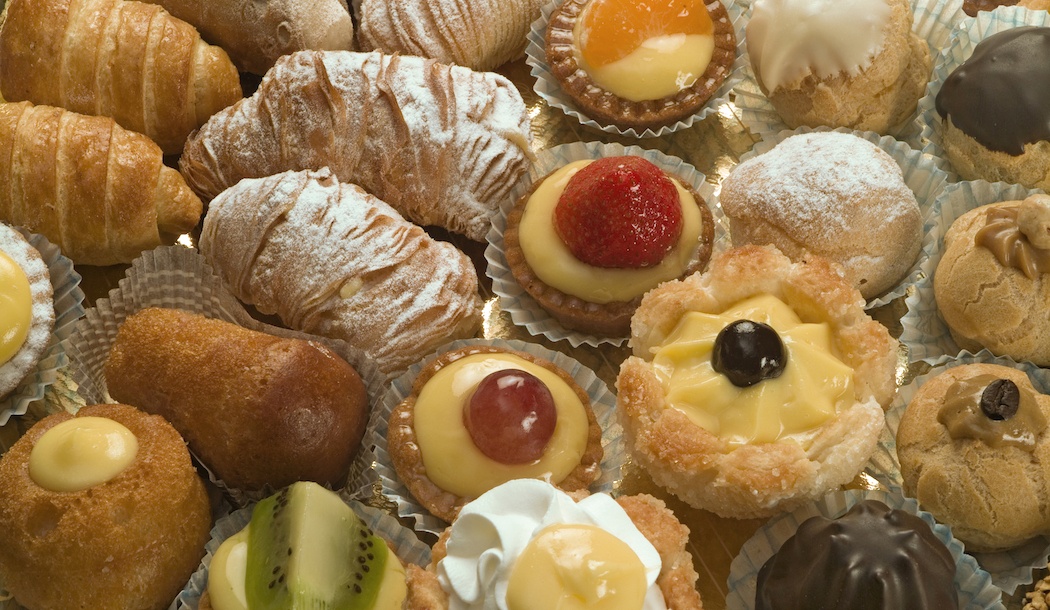 Over the last century, the processed-food industry has worked hard to create synthetic, shelf-stable colors, flavors, and preservatives. Today I’m going to focus on the colors and set aside the chemical flavors and preservatives.

For colors, the goal was to create cheap hues that were easy to concoct in laboratories and insert into foods to make them look pretty, cheerful and fun.

Probably the most egregious examples are the pastries, which of course supermarkets place just inside the entrance to tempt us as soon as we walk in the store. I see black and orange cakes and cookies at Halloween and wonder, “How on earth do they come up with black icing and why would anyone eat it?”

The greens, reds, blues and yellows employed for other holidays and birthdays are no better. It all comes out of a lab. And of course, pastries are not the only culprits. Many processed and packaged foods contain artificial coloring. Let’s take a look at what this stuff does to you. . .

The evidence continues to pile up showing just how harmful artificial food coloring is. Many of these food dyes are made from coal tar and petroleum, both known carcinogens. Worse, these dyes have been linked to health behavior issues like hyperactivity in children, and various forms of cancer.

Fortunately for all of us, there are natural options for food colors, and many corporations are (surprisingly) taking the lead in implementing these safer options. More on that in a moment.

To understand the enormity of this problem, it helps to look at its history. Food dyes have a long track record of disastrous effects.

In the early 1800s, when food sellers first began to dabble with chemistry, they began adding odd things to their products to hide discoloration or stretch foods past spoil dates. For example, copper helped make pickles bright green again and lead (believe it or not) was added to children’s candies to produce an enticing bright red.

Crimes like this make me despair of the human race, but I digress. . .

As food-related incidents of illness and death began to rise, Congress banned poisonous colors with the 1906 passage of the Food and Drugs Act. But – bad news – at the same time it also approved dyes made from the thick black liquid left over from processing coal for fuel. Several coal-tar colors came into popular use, revolutionizing the food industry with brightly-hued cereals, snacks, and candy.

Then in 1950, dozens of children got sick after eating their trick-or-treat candy, much of which had high levels of Orange No. 1. This brought about the first wave of outrage from parents. In due course, government tests led to bans on Orange No. 1 and the even more offensive Red No. 32.

This was only after all the rats that fed on Red No. 32 in an experiment to test its safety ended up dying.

This, I guess, was deemed an undesirable side effect.

At least Europe got it right…

The first major opposition against these remaining colors came in 1973, when a pediatric allergist named Benjamin Feingold first presented a paper that linked artificial colors to hyperactivity in children.

The F.D.A. largely shrugged off Dr. Feingold’s claims, and between 1955 and 2015 the production of artificial colors in the U.S. surged to over 17 million pounds. A study released in 2016 showed that these days as much as 43% of all food products marketed to children and a whopping 95% of fruit-flavored snacks contain artificial dyes.

Consumption of food dyes has increased 500% over the past 50 years, with children eating the most by far.

And of course, Dr. Feingold was onto something. In 2004 and 2007, two major scientific studies showed proof that there is a link to hyperactivity and artificial colors in children.

The European Union jumped on this and, in 2010, began requiring food labels to note the presence of artificial dyes. Also required is a warning that those dyes “may have an adverse effect on activity and attention in children.”

The happy result was that food manufacturers in Europe didn’t want to put that scary label on their products, so they phased out synthetic colors in their market.

The luck didn’t reach this side of the Atlantic. An FDA advisory panel voted the United States didn’t need the warning labels to protect our kids. But in a hopeful backlash, consumers and parents in particular have started demanding change from companies where they spend their dollars.

To their credit, several major U.S. food companies are listening to consumers and have started removing food dyes from their products. Panera Bread, the well-known bakery-café chain, announced in early 2017 it is now 100% additive-free and uses no artificial colors in its products. The bright colors on their iced cookies now come from sources like beet extract and spirulina extract.

In 2016, the global food manufacturer Mars Inc. announced its plan to get rid of all artificial colors from its human food products (the company also makes pet foods; I don’t know why pets need pretty colors).

Mars intends to roll out the change over a five-year period, so they’re still working on it. The change will affect some of the most loved candies, like M&Ms and Skittles.

Kraft Foods revamped its famous yellow-hued macaroni and cheese by creating a new yellow from paprika, turmeric, and annatto (a color that comes from tree seed).

But in some cases, the rage to increase sales has eclipsed efforts to make food safe. General Mills reportedly experimented with 69 natural food dyes before releasing a naturally colored version of the cereal Trix. The resulting new version did not have blue or green cereal puffs because the company couldn’t find workable natural substitutes for those hues.

If you’re my age, you may remember the TV commercials for Trix in which a cartoon rabbit touted the “raspberry red, lemon yellow and orange orange” puffs.

It seems some consumers can’t live without them. Not long after introducing the non-toxic version, General Mills announced a plan to continue offering its original Trix formulation, made with with Red 40, Yellow 6, and Blue 1.

According to the company, Trix fans wrote and called in droves asking for the original formulation, because “colors make breakfast fun for kids.” (Cynics suggest the decision was swayed more by the increasing input costs from naturally sourced colors.)

What to avoid going forward

The fact is, food dyes are loaded with carcinogens. Red 40, Yellow 5, and Yellow 6 all contain benzidene. Yellow 5 also has tartrazine, which binds to DNA and causes damage.

Blue No. 1 is able to cross the blood-brain barrier, which protects your brain from toxins and pathogens circulating in the blood.

And while food coloring is more well-known as an ADHD problem, it’s fast becoming a public health problem for other reasons. Increasing numbers of studies show these dyes can interfere with digestive enzymes, and contribute to liver toxicity and allergies.

From a health perspective, using food dyes when there are natural color substitutes is beyond crazy. It’s not just because artificial food dyes contain toxins and natural food coloring doesn’t. The molecules in fruits and vegetables that give them their bright colors are among the most nutritious ones ever discovered.

Supplement makers actually extract these natural colors and sell them in concentrated form because the health benefits are so powerful.

Think about it. The same pigments that make beets red and spinach green – most of which are antioxidants – can be used in natural food coloring. So when you choose natural food coloring over synthetic dyes, you’re actually putting something healthy into your system instead of loading it up with toxins.

This year, make your holiday cookies with natural colors

At this time of year, many people like to bake and decorate holiday cookies. If that sounds like you, I suggest buying natural food coloring from your local health food store. You can even try your hand at making colorings yourself.

If you have kids, teach them to choose white or chocolate icing when they’re offered cupcakes at a party. You may not be able to eliminate every sugar encounter they have, but you can teach them to avoid the bright red or blue or green globs of icing.

Also, stay vigilant about checking food labels. As in the case of General Mills’ Trix, just because a company announces their good intentions to take toxic dyes out of their food products doesn’t mean they’ll follow through. Avoid anything that says “color added” on the label, and especially steer clear of anything with Red 40, Yellow 5, and Yellow 6.

And as I hinted at the beginning, preservatives and artificial flavors pose a danger, too. I buy very few processed and manufactured foods myself. A rule of thumb is that if there are more than five items in the list of ingredients, don’t buy the food. Another good guideline is “Don’t buy a food that contains anything you can’t pronounce.”

As you can see, the modern world confronts us with many health challenges. Another one of them is polluted air. . .