Could This Common Spice be Better Than Cancer Drugs? – Cancer Defeated

Could This Common Spice be Better Than Cancer Drugs? 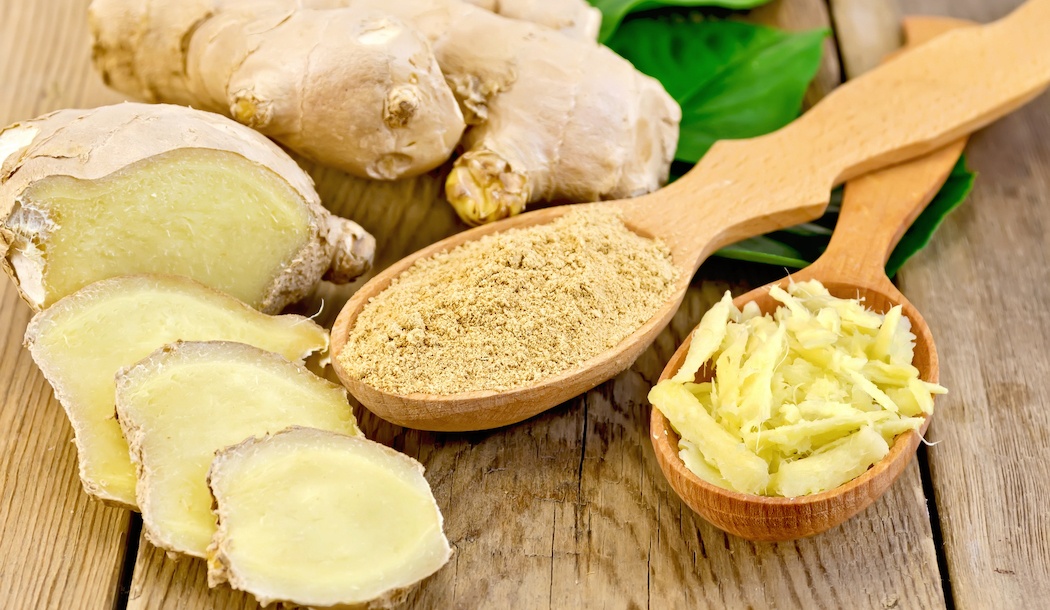 This spice reigns as one of the world’s favorite culinary flavors and natural medicines. It’s a popular addition to numerous stir fries and curries and, outside of the kitchen, this spice is recommended for many different health conditions. Now, researchers can add cancer to the list.

In America this herb has been popularized by such foods as ginger ale, gingerbread, ginger snaps, and more.

Perhaps ginger’s most popular use and benefit as a remedy is to aid good digestion (it breaks down proteins and fatty acids to relieve gas and bloating), and as a treatment for motion sickness, morning sickness and nausea — including the nausea of chemotherapy. Maybe your mother used to give you ginger ale for an upset stomach.

Native to China and India, where it has stood the test of time for 4,400 years, ginger root is now cultivated throughout Asia, Australia, South America, Jamaica, and the U.S.

The plant has delicate green leaves like baby spinach. Also, like spinach, the ginger root leaves can be eaten as a salad. But its outstanding medicinal significance comes from the root or rhizome. Ginger root’s most important active components are believed to be its volatile oils and pungent phenol compounds (its gingerols and shogaols).

Studies have shown that ginger extract or its components are able to fight against breast cancer and ovarian cancer cells and may also help fight other cancers such as cancers of the colon, liver, lung, pancreas, prostate, and skin, including deadly melanomas.

In 2006, researchers at the University of Michigan found that ginger caused ovarian cancer cells to die. The way those cells died suggested that ginger might be able to keep cancer cells from becoming resistant to conventional treatments.

The researchers used ginger powder like that in your spice cabinet but upgraded to a standardized research grade. When dissolved in solution and set loose on ovarian cell cultures, it induced cell death in all the ovarian cancer cell lines tested.

Study author J. Rebecca Liu, M.D., assistant professor of obstetrics and gynecology at the University of Michigan, says, “If ginger can cause autophagic cell death in addition to apoptosis, it may circumvent resistance to conventional chemotherapy.”

It may revolutionize breast cancer treatments, too…

Breast cancer studies also suggest that ginger could be a better breast cancer fighter than any drug on the market.

At least that’s what researchers at King Abdulaziz University in Saudi Arabia published in a study in the Journal of Biomedicine and Biotechnology.

Typically, breast cancer treatment involves hormonal therapy with selective estrogen receptor (ER) modulators (such as tamoxifen). But almost everyone with late-stage, metastatic breast cancer and 40 percent of other cancer patients using ERs suffer relapse and death. What’s more, many breast cancer cells already resist the drugs by the end of one single treatment.

In contrast, a crude ginger extract stopped the cancer cells from reproducing.

Ginger showed the highly prized anti-cancer quality of selective cytotoxicity — that is to say, it killed cancer cells but left healthy cells unharmed. Its ability to be selective is unmatched by any conventional cancer treatment.

Ginger appears to modulate many anti-cancer mechanisms (apoptosis and more). Researchers can’t yet explain all of ginger’s molecular effects, but admit they look promising. And get this: Previous studies also show that the ginger compound [6]—Gingerol hinders breast cancer from spreading.

A man’s prostate gland naturally enlarges with age, which boosts his chances of cancer. By age 80, a whopping 80 percent of all men will have prostate cancer. So, this discovery is worth paying attention to…

This was with a daily dose of 100 mg of ginger extract per every kilogram of body weight (about 6800 mg per day for a 150-pound man). During eight weeks, the ginger cut prostate tumor growth in half.

If using fresh ginger, the researchers estimate 100 grams would offer similar results. Now, that’s a lot of ginger. But if taken as an extract it’s only about seven grams, which might be tolerable.

In yet another University of Michigan study, published in the journal Cancer Prevention Research, Suzanna M. Zick, N.D., M.P.H. and her research team studied 30 volunteers randomly assigned to take two grams of ginger root supplements or placebo daily for 28 days for inflammation linked to colon cancer.

Four weeks later, inflammation markers were significantly lowered in those taking the ginger root supplements. And I should note that the doses were low, compared to those recommended by the authors of the prostate study.

This inflammation squelching may be one reason ginger helps fight cancer cells. It could also explain why some studies find that ginger is a boon to arthritis sufferers and many other inflammation-mediated diseases.

Ginger is thought to help fight diverticulitis, gallbladder inflammation, and heart disease, and to promote blood flow to your brain to keep it healthy and young.

Ginger especially inhibits two enzymes that play a key role in rampant inflammation — the cyclooxygenase (COX) and 5-lipoxygenase (LOX). Anti-inflammatory drugs can block COX but completely miss LOX. As a result, they only address part of the problem. And — oops! — the drugs cause serious side effects that can lead to death.

Ginger, on the other hand, treats a broader range of inflammation because it deals with both the COX and LOX enzymes. It doesn’t shut down inflammation entirely but appears to turn it on and off as appropriate.

Addresses the pain caused by inflammation, too

Why take aspirin or Tylenol when you can take ginger for pain — without the potentially dangerous or even deadly side effects?

Studies comparing ginger’s efficacy against pain to that of aspirin and other pain drugs show that ginger requires smaller doses to get the same level of relief. It has no known side effects.

Osteoarthritis and fibromyalgia are just two conditions that could benefit from ginger’s pain remediation.

As for the often-recommended doctor advice to take aspirin for heart health, one word: Don’t. Studies show aspirin and other anti-inflammatory drugs (NSAIDs) can lead to stomach upset, bleeding ulcers, joint discomfort, and a potentially compromised immune system. Furthermore, regular aspirin and NSAID use results in a higher risk of death.

A cardiology clinic in an Israeli hospital now prescribes all its patients one-half teaspoon of ginger daily instead of aspirin.

As long ago as 1980, researchers at Cornell already knew that ginger stopped life-threatening platelet aggregation, hardening of the arteries, and high cholesterol. So why haven’t you been told this?

Probably because conventional medicine would rather sell you on expensive anti-cholesterol drugs with deadly side effects!

Back to ginger’s best-known benefit. . .

In China, ginger has been used to aid digestion and treat stomach upset, diarrhea, and nausea for over 2,000 years.

Perhaps the most distressing and feared side effects of chemotherapy are nausea and vomiting. Besides being so disagreeable, they can lead to loss of needed nutrients, metabolic imbalance, and damage to the esophagus.

Several clinical trials show ginger helps reduce the nausea and vomiting associated with chemotherapy, as well as the nausea linked to surgery, motion sickness, and morning sickness. It may also help people who suffer from Irritable Bowel Disease or IBS.

The actual studies on motion sickness are mixed, though some people swear by it. Studies do indicate a positive effect for pregnancy-related nausea, but you should discuss this with your doctor prior to using ginger.

Ginger is thought to affect receptors for the neurotransmitter serotonin in your digestive tract, an action similar to conventional anti-nausea drugs.

Given its broad healing properties and zesty flavor, it’s hard to see how you can go wrong by adding ginger to your diet, at least in some measure.

Do beware of the following: Don’t take ginger if you have a bleeding disorder, are taking heart or blood thinning meds, aspirin or NSAIDS. It can alter the effects of some prescription drugs so consult your doctor if you’re on any. And never give ginger to children under the age of two.

How to buy and use ginger

For superior flavor and the highest levels of the compound gingerol and other anti-inflammatory compounds, choose fresh ginger, available in the produce section of your grocer. Look for a root with firm smooth skin, no mold, and as few twists and joints as possible. If it’s wrinkled, it’s already drying out and will be woody.

Ginger can be either young or mature. Mature ginger is widely available and requires peeling. Young ginger is typically only available in Asian markets and needs no peeling.

Peel with a paring knife or potato peeler. Then you can slice, mince, or julienne it. Its intensity of flavor depends on when you add it during cooking. For stronger flavor, add it close to the end… for a more subtle taste, add it at the beginning.

You can also brew ginger as a tea to induce sweating… it’s great to relieve a fever and to boost your immune system. For fresh ginger tea, steep five or six thin slices of ginger root in hot water. Add lemon if desired.

You can also brew ginger as a tea to induce sweating… it’s great to relieve a fever and to boost your immune system. For fresh ginger tea, steep five or six thin slices of ginger root in hot water. Add lemon if desired.

Combine ginger with the pungency of garlic for a wonderful flavor and a terrific anti-viral treatment for colds and flu.