Deep-Breathe Your Way to Ideal Health 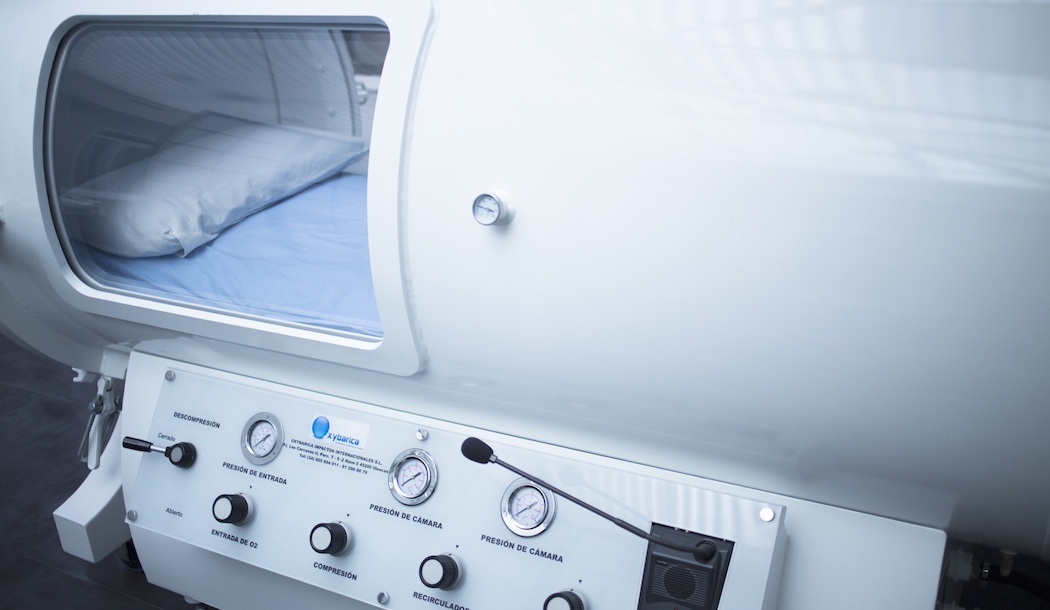 Imagine climbing into something that looks like a tanning bed. You feel a noticeable increase in air pressure, and then you just lie there and breathe for a while as your body heals in radical ways…

It sounds almost too simple, yet it’s a treatment that’s making headlines across the world for helping people overcome a variety of illnesses, cancer included. What’s more, it’s often covered by insurance.

I wish it were easier for people to get – it’s still “exotic” to mainstream doctors – but with a little determination you may be able to access it without leaving your home town, and in the last resort there are home units that are pretty affordable.

The official name for this like-a-dream treatment is hyperbaric oxygen therapy, or HBOT. The word hyperbaric literally means high pressure. The therapy involves breathing 100% oxygen while inside a chamber in which the air pressure is significantly higher than you experience in the open air.

The first roots of hyperbaric oxygen therapy date back as far as 1662, but it wasn’t till 1917 that German inventors Bernhard and Heinrich Dräger applied pressurized oxygen to successfully treat decompression sickness – also called the bends — a hazard of scuba diving that happens when divers ascend to the surface too quickly.

In the United States, HBOT is the standard, accepted treatment for the bends, and that’s why many hospitals have an HBOT chamber.

In a hyperbaric oxygen therapy chamber, the air pressure gets increased to three times higher than normal. This makes it possible for your lungs to suck in more oxygen than they can under normal air pressure conditions.

Breathing pure oxygen during the treatment means you increase the partial pressure of oxygen in the tissues of your body to a much higher level than normal. The high pressure “pushes” oxygen into places it normally wouldn’t go, at least not in large amounts.

The increased atmospheric pressure ups the amount of oxygen in your blood plasma, which makes it more available to your tissues than the regular delivery of oxygen through hemoglobin (found in your red blood cells but not the surrounding fluid).

With high levels of oxygen in your blood, your body is better equipped to handle just about everything. Benefits include fighting off bacteria, stimulating growth factors and stem cells to support healing, and restoring normal levels of blood gases.

And scientists are still discovering more benefits. Given that every cell in your body requires oxygen to survive, it’s a lot like giving your cells an inhalable power boost.

When too much O2 is a terrific thing

What we know right now is that HBOT helps treat an impressive variety of medical conditions, from basic ailments like allergies to ravaging diseases like cancer.

I first learned of HBOT as a treatment for stroke.  Disabled stroke victims who go through a series of HBOT treatments often regain lost function, ranging from speech to paralyzed arms and legs, and more. The results can be incredible.

Unfortunately, mainstream medicine has dug in its heels against HBOT for stroke victims, and if you’re in a care facility (as many paralyzed stroke victims are), the treatment is next to impossible to get. I also have to note that I don’t know if the improvements are permanent; the patient probably has to stay on HBOT for the long term.

During a normal inhalation of air, oxygen goes into your lungs and gets carried into your blood. From there, it feeds cells throughout your body. Cancer cells need oxygen to survive just like any other cell – that’s one of the reasons tumors make new vessels to tap your body’s blood supply (this is angiogenesis). If a tumor grows quickly, it can outgrow its oxygen supply. Yet that doesn’t always stop it from growing. In fact, some cancers thrive when they get starved of oxygen (this is hypoxia).

The theory behind hyperbaric oxygen treatment for cancer has to do with the challenge encountered when tumors are hypoxic and thrive as a result of low oxygen. Ideally, flooding those cancers with oxygen has the opposite effect. And so far, evidence suggests the treatment is effective.

In a review published in Targeted Oncology, researchers first sought to prove that HBOT would not contribute to tumor growth when the tumors were undergoing angiogenesis (i.e. forming new blood vessels to feed the tumors). That would be a bad outcome.

The researchers found no evidence indicating that HBOT stimulates tumor growth or increases the likelihood of cancer recurring.

On the other hand, there is evidence that HBOT might inhibit tumors in certain cancer subtypes. In one study, researchers combined HBOT with the ketogenic diet (one of my favorite cancer therapies) to treat mice afflicted with systemic metastatic cancer.

The keto diet was used to decrease blood sugar and thereby slow cancer progression. Having weakened the cancer with the eating plan, the researchers then used HBOT to saturate the tumors with oxygen, which reversed the cancer-promoting effects of tumor hypoxia (lack of oxygen). The combination of the two produced a significant decrease in blood glucose, tumor growth rate, and – here’s the headline — a 77.9% increase in average survival time.

In a different study, published recently in Medical Gas Research, HBOT was tested as a treatment for prostate cancer. The researchers cited several studies of lab-cultured cells in which HBOT decreased the rate of growth for cancer and increased sensitivity to anticancer agents. They also found that HBOT has considerable effects on carcinoma, especially when it comes to decreasing complications and improving survival statistics.

What HBOT is like, and where to get it

HBOT can be delivered in one of three types of chamber. There’s the high-pressure chamber, which can hold multiple people at once, seated, and is pressurized with 100% oxygen. This is the most common chamber in hospitals and commercial HBOT facilities.

A monoplace chamber, on the other hand, houses one patient at a time, lying down (this is the one that can look like a tanning bed).

There are also low-pressure monoplace treatments in which several people sit within a pressurized chamber and breathe pure oxygen via fastened masks, hoods, or endotracheal tubes.

During hyperbaric oxygen therapy, you’ll feel a temporary fullness in your ears – very much like you might feel if you drive in the mountains. Yawning or swallowing helps relieve this.

Other than that, there’s little risk. Rarely, someone might have temporary nearsightedness (myopia) because of a temporary eye lens change, or a middle ear injury because of the increase in air pressure. But for the most part people report feeling only tired or hungry afterwards.

You can buy your own HBOT chamber for around $5,000… but a better option might be to talk to your provider to see if you can get access to a multi-person chamber in your community.

In the meantime, take five minutes a day to breathe deeply, slowly, and mindfully. It’s not the same as a full HBOT treatment, but it is a way of giving your body more healing oxygen than you’re likely to get with normal breathing.