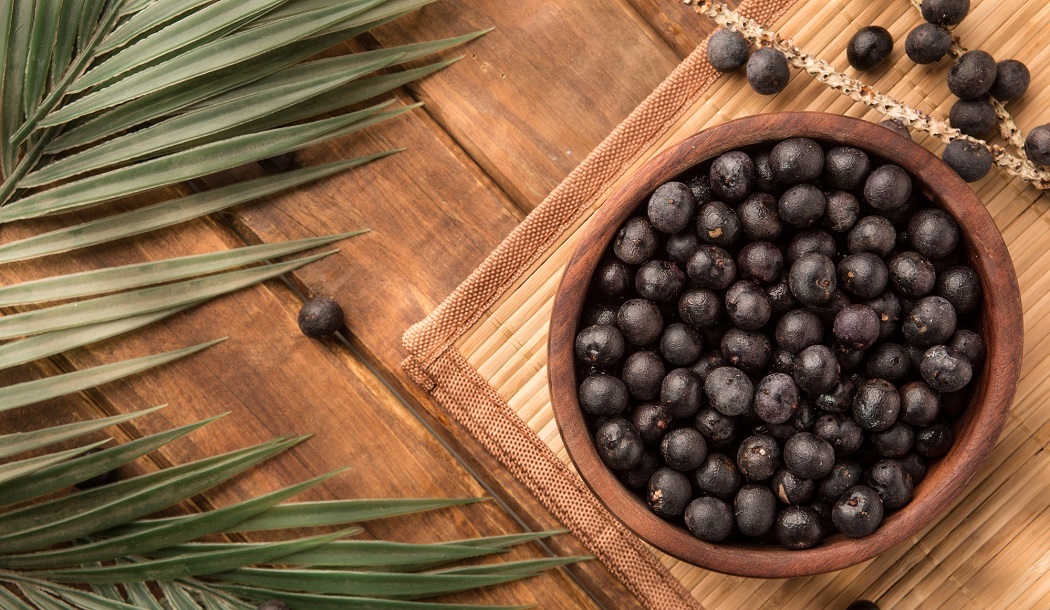 Over the last two decades scientists have uncovered widespread health benefits in a dark purple fruit that’s beloved in Brazil.

The fruit is called Euterpe oleracea Mart, but is more popularly known as açaí (pronounced ah-sigh-EE).

And now the latest research reveals açaí has special properties that can not only prevent cancer, but can also help treat it.

Sized between a blueberry and a grape, açaí has one large inedible seed that makes up 90 percent of both its diameter and weight. Although frequently described as a berry, its single seed means it’s classified as a fruit. True berries have lots of little seeds.

The remaining ten percent of açaí is made up of the fleshy pulp and skin containing over 3000 densely packed compounds with high levels of flavonoids, fiber, protein, potassium, vitamins B and E and omega 3, 6 and 9 fatty acids.

The “tree of life”

Açaí is consumed as a food and beverage primarily in Brazil, where it grows on thin, 85-foot palm trees in the flood plains of the Amazon river and its tributaries.

The locals call it the “tree of life,” and almost everyone seems to consume it in juice form, claiming it boosts energy, aids vitality and promotes good health.

It’s “naturally low in sugar, and the flavor is described as a mixture of red wine and chocolate. So what more would you want from a fruit?”

I have to say, based on that description I already want some.

Açaí became well-known in the U.S. in 2004 after being featured on the Oprah Winfrey show for weight-loss and beauty properties, and was later heralded by Dr. Oz.

Açaí’s long list of pharmacological activities were described in a recent review in the jounralBiomolecules as:

Other researchers listed additional properties when the açaí oil and seed extracts were included. These are anti-diarrheal, anti-convulsant, anti-angiogenic [prevents formation of unwanted blood vessels—which can lead to cancer], neuroprotective, anti-leishmania [a tropical parasitic disease], and anti-aging.

Researchers have investigated a number of these actions, especially in relation to the prevention and treatment of cancer.

Açai is packed with antioxidants that come mainly from flavonoids called anthocyanins and proanthocyanidins, providing the fruit with more than three times the capacity of blueberries to fight free radicals.

Perhaps most beneficial, açaí is shown to have the highest activity of any food against the peroxyl free radical, which is the the most predominant in the body. It also has exceptional scavenging activity against the superoxide radical.

Recently, açaí was tested in the first-ever human trial in patients with prostate cancer.

Oncologists from the University of Colorado were inspired to study açaí in prostate cancer patients after discovering that two patients in their clinic both saw sizable declines in PSA values while consuming açaí juice.

So the oncologists performed a study of 21 patients with recurrent prostate cancer who were tasked with drinking two ounces of açaí juice twice daily for 36 weeks.

Two patients saw a decline in the PSA by more than 50 percent, and another 15 saw their PSA decline by less than 50 percent. That means açaí worked in some capacity for a little more than 80 percent of the patients enrolled in the study. As a survivor of prostate cancer, I can tell you those are impressive numbers. Cutting your PSA score in half is no mean feat.

The authors concluded that the study results “suggest a role for açaí in stabilizing disease.”

Their findings back up existing laboratory studies on açaí’s healing actions in a variety of cancers.

It also increases levels of IFN gamma, which boosts many aspects of the immune system and suppresses an inflammatory response.

Other mechanisms of açaí have also been shown to protect against the formation of tumors and to act against existing ones.

One such mechanism is apoptosis whereby cancer cells self destruct. Açai both activates pathways that induce apoptosis and reduces proteins that suppress apoptosis. Açai also impedes the growth of tumors by acting against various proteins that are involved in tumor development.

Successful results in every animal study

In a review of nine high quality animal studies the authors wrote, “The anti-carcinogenic and chemopreventive activities of açaí, as evidenced by reductions in the incidence of tumors, tumor cell proliferation, and multiplicity and size of tumors, were observed in all the experimental models of cancer.

“The results of this review suggest that açaí is safe and can be used as a chemoprotective agent against cancer by exhibiting anti-inflammatory, antioxidant, anti-proliferative, and proapoptotic properties.”

The particular effects seen in their review occurred in cancers of the esophagus, bladder, colon, breast, and skin (melanoma).

In the melanoma study, a special nanoemulsion (microparticle emulsion) of açaí acted as a photosentisizer – a light sensitive compound – for photodynamic therapy, in which a lamp or laser is shone on to the treatment area after the patient has consumed or been infused with the compound.

After five treatments this resulted in an 82 percent decrease in tumor volume compared to the control tumor group. The researchers believe this combination could be a potential new treatment for melanoma.

The P63 gene that’s expressed in this type of cancer was also reduced.

Of the two studies carried out in colon cancer, one demonstrated significant reduction in the number of precancerous polyps and tumors, accompanied by downregulation of pro-inflammatory cytokines.

The other saw a significant reduction in the number of aberrant crypts and foci (the earliest lesions seen in colon cancer), a reduced total number of tumors, a lower number of tumors with invasive potential, and diminished tumor growth.

Açaí was shown to alleviate the expression of pro-inflammatory cytokines, induce apoptosis and increase the production of antioxidant enzymes in the formation of colon cancer. The authors of this study concluded that the “intake of açaí may be beneficial for the prevention of human colon cancer.”

In the U.S. açaí has long been considered a superfood. While you can consume the juice, it’s also available in supplements and cosmetics, such as anti-aging creams.

With all of the cancer-fighting benefits that science is revealing about açaí, making this fruit a regular part of your anti-cancer diet is good sense. What’s more, because the juice is naturally low in sugar, you can enjoy an açaí drink without worrying about a spike in blood sugar like you’d have with most other juices.