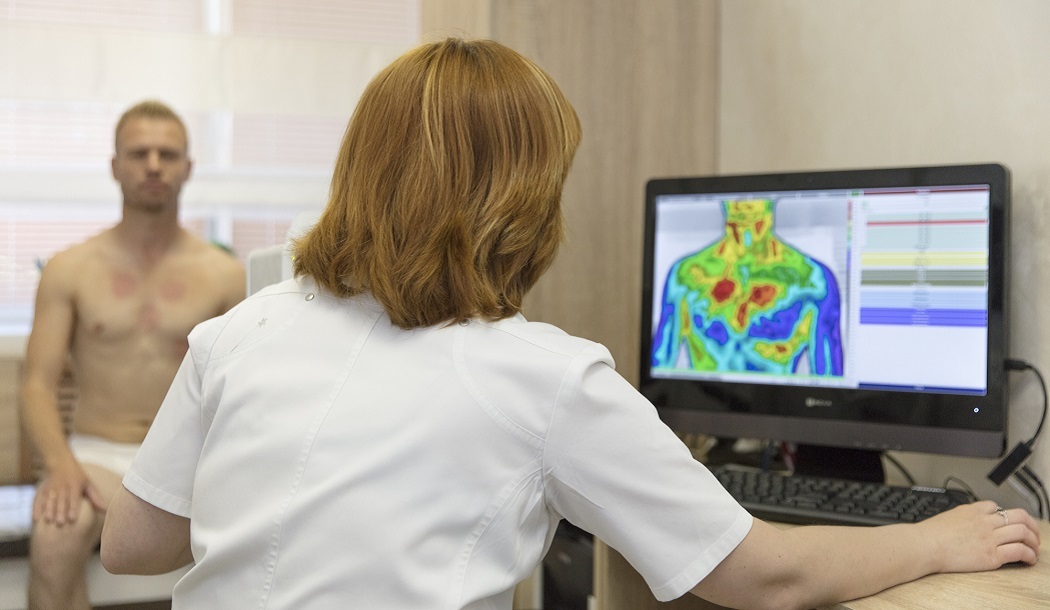 Imagine if you could see what’s going on inside your body. What if you knew if you had cancer, an increased risk of stroke, gastrointestinal problems, nerve damage, arthritis or even migraines?

And what if you could discover it all without invasive testing or damaging radiation? Just one test that requires no contact at all– no needles, not even a touch?

A simple, safe test like this would be life-saving. Well, this test exists but most people don’t know about it.

Today, we’re going to take a look at the science behind thermography.

If you go to an urgent care center or a hospital with an injury or illness, then you might receive an X-ray, CT scan or MRI.

These are all tests of “anatomy” that measure body structures, and they’re perfectly good for diagnosing certain injuries and diseases. However, when it comes to cancer and many other potentially deadly health conditions, a thermogram is far better.

Thermography is unique in its ability to show physiological or functional change in the body.

In other words, it provides life-saving information that no other diagnostic tool can, especially when it comes to cancer.

A life-saving screening that
not only helps diagnose, but predict cancer

Thermography is a non-invasive digital infrared thermal imaging (DITI) method. The FDA approved it in 1982 as an adjunct breast cancer screening procedure.

Thermography’s basic premise is that lesions in the breasts are hotter than healthy regions. It measures the body heat produced by metabolism and blood flow.

A thermography machine converts heat energy emissions into electronic video signals, which are then displayed on a computer screen. It doesn’t send out rays to do this. Instead, it registers infrared or electromagnetic energy that’s released from your body.

Thermogram technicians know what a healthy body’s heat emission patterns look like, a phenomenon they call the thermoscape.

Thermograms reveal inflammation, “hot spots,” and abnormalities far earlier than traditional tests do. This gives you a head start on lifestyle changes that could alter the course of a potential disease.

Cancer Defeated has recommended this test a number of times to replace mammograms, but I’m not sure it’s ever really caught on. The medical world has a massive investment in radiation technology.

Tested successfully in thousands of women

It’s a shame that, once again, patients are the victims of hidebound, backward medical practices, because more than 800 independent studies worldwide have validated the use of thermography.1,2

One study followed 58,000 women and their use of thermography for 12 years. Of those, 1,527 women initially had healthy breasts but later developed abnormalities.

Of that 1,527, 40 percent developed malignancies within five years.

The study’s conclusion? Researchers wrote, “An abnormal thermogram is the single most important marker of high risk for the future development of breast cancer.”3

In other words, don’t ignore abnormalities on your thermogram.

It’s important to note that thermography does not definitively diagnose cancer. But neither does mammography – which also exposes you to high doses of radiation at the equivalent of 1,000 chest x-rays. And 3D mammograms double that exposure.

The only screening tool that provides a sure diagnosis of cancer is needle biopsy.

Thermogram screenings are unique because patients become their own “control” – the technician compares heat and circulatory differences in the patient’s own thermograms over time and note areas of concern that you can discuss with your doctor.

Most people familiar with thermography – including me – link it to breast cancer screening only. But the truth is, thermography reveals many health issues from head to toe, for men and women alike.

Sounds the alarm early for heart attack and stroke

Thermography is valuable as an early warning sign of heart disease, especially atherosclerosis. Atherosclerosis is high-risk because it’s a silent killer. You may think all is well, until you suffer a major heart attack or stroke.

Thermograms create a baseline using areas of the body where atherosclerosis is rare, then compares them to other areas. When technicians see disturbances or deviations in blood flow, they know something is amiss.

For example, an image where one finger is a different color from the others indicates an issue. The cause could be blood flow obstruction to that finger.

Or, if a thermogram reveals a restriction in an artery, 90 percent of the time it’s from atherosclerosis, meaning heart disease is heading your way.

We learned of a case where an individual went to the ER twice with symptoms that could indicate possible heart trouble. Neither time was he advised to get scanned for carotid artery occlusion, yet a full-body thermograph later revealed a large blockage in the carotid artery – which put the man at serious risk of heart attack and stroke.

Health-conscious people love thermography because it gives early warning of health problems. This allows doctors and patients to address issues before it’s too late. Thermography is also useful in screening for the following health issues:

Free of pain, radiation, or compression

With thermography, there is no pain, radiation, or compression because it’s only detecting temperature changes. Before your appointment, you need to avoid anything that raises your body temperature. Things like sauna, exercise, sunbathing, and hot showers.

Thermography is appropriate for people of all ages (over 18), safe for pregnant and lactating women, and useful for women with breast implants or previous mastectomy. You can safely be tested as often as you wish: there are no risks.

You can also self-refer. No doctor referral is needed.

Before your thermogram, staff will discuss your medical history with you and the technician will explain the procedure.

In the imaging room, you’ll disrobe and acclimatize to the cool room temperature (60-65 F) for about 15 minutes to ensure screening accuracy.

The actual scan takes between five to 25 minutes, depending on whether it’s a whole-body scan or a breast scan. You’ll stand in front of the imaging machine while the tech takes a series of pictures.

Physicians then review your images and your health questionnaire. Some clinics have multiple doctors review them, for greater accuracy. If you call around to choose a clinic, ask about their review process.

In a week or two, you’ll get your results.

The hardest part is paying

The most painful part of a thermogram might be paying for it, as Medicare reportedly does not cover the cost, and neither do many private insurance companies. However, you may be able to use your HSA or FSA card.

If you’d like to get a scan for breast cancer, United Breast Cancer Foundation offers financial aid for thermographic breast screening. You can apply for aid at least once a year.

If you qualify, you could receive a $150 grant for your baseline screening. You could also receive a smaller amount for a follow-up screening. For more information copy and paste this URL (http:// ubcf .org/breast-screening) into your browser address bar and remove the spaces.