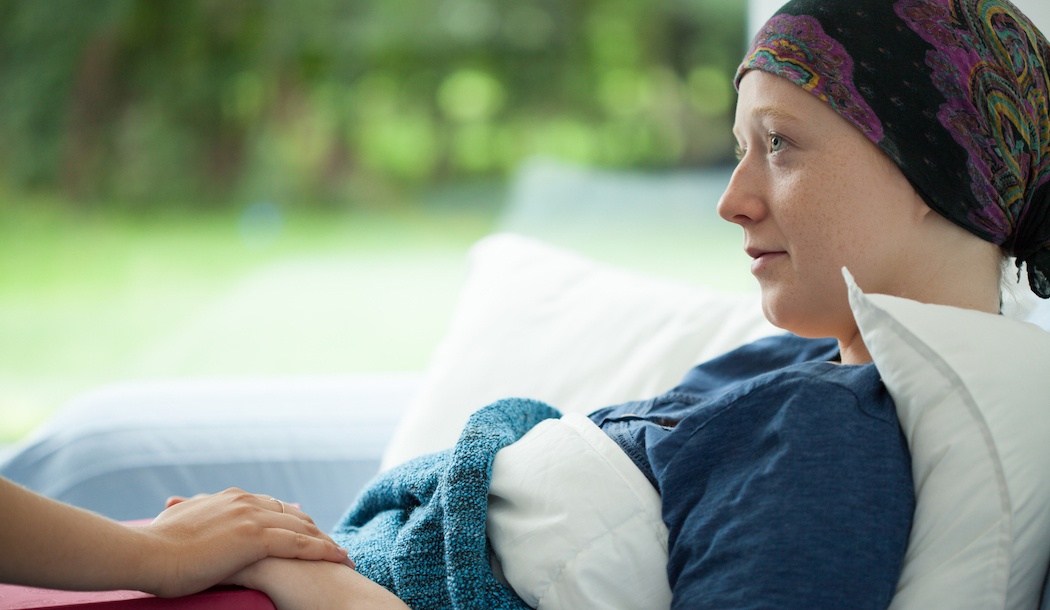 Jane McLelland was supposed to die in 12 weeks. At least that’s what the statistics say when cervical cancer has spread to a woman’s lungs.

But this 35-year-old UK physiotherapist, wasn’t ready to give up on life when she got the bad news in 1999. She had too much to live for. She refused to accept her prognosis. Instead, she threw herself into research and came up with a plan.

Jane decided she would starve the tumor with anti-cancer nutrients and herbs, and cut off its supply lines until it shrank and died. At the same time, she would keep her healthy cells and organs well nourished.

It was a daunting task, but all seemed to be going well until she was hit by a new, massive blow. In 2003 she was diagnosed with therapy-related leukemia, a little known late-stage side effect of the chemotherapy that she had unwisely decided to undergo years before when she was first diagnosed. This “side effect” is almost always fatal.

Her situation seemed hopeless. But in 2004 the results of the protocol she started five years earlier were in. The cancer was gone. Jane remains cancer free to this day.

Jane’s problems actually began way back in 1989 when some mildly abnormal cells were found. After treatment she was told repeatedly during the following five years that there were no more abnormalities.

But she was diagnosed with cancer in 1994 just the same. Her gynecologist turned out to be totally incompetent, a fact that became obvious a few years later when there was a national recall of over a thousand of his patients.

She also had a bad time with her surgeon. She hadn’t borne children but she still had hopes of raising a family in the future. Yet her request to freeze some of her eggs before chemotherapy and radiation was brushed aside.

Her experience with her oncologist was no better. She found him to be “brusque, dismissive and scornful” of other options she suggested. In general, she found the oncologists she met to be arrogant and dogmatic, unwilling to consider anything but their “gold standard” treatments — and certain they know what’s best for you.

Five years after she first learned she had cancer, and after all these negative experiences with conventional cancer treatment, she was told her disease had progressed to stage 4 – the “death sentence” I described at the beginning of this article. That’s when she realized she would have to become her own expert if she was to have any chance of survival.

She started by making changes to her diet, even though the medics said this was useless.

She learned that cancer feeds on glucose, so it made sense to her to opt for a healthy low carbohydrate diet where foods that would spike blood sugar and insulin-like growth factors were eliminated. She also kept saturated fats to a minimum, avoided foods that could trigger inflammation, and reduced her overall calorie intake.

Then she changed her oncologist. This was essential. Jane found someone who would be a collaborator, not a dictator.

Because certain enzymes and other factors are linked to inflammation and fuel cancer growth, it made sense to take something that would inhibit them, like low-dose aspirin. She put this to her thoracic surgeon (who operated to remove a third of her lung), but he thought not. There wasn’t enough evidence to support its use, and it could be risky, he suggested.

She ignored his advice and took it anyway as well as other anti-inflammatories — ginger, curcumin and omega 3 fish oils.

Jane also made regular visits to an integrative doctor who specialized in cancer.

He prescribed folate, because methotrexate, the chemotherapy drug she’d taken when first diagnosed, would have depleted it. Folate is an important building block of DNA.

He also recommended B vitamins to detoxify excess “bad” estrogen (estradiol), which stimulates tumor growth, and niacin to starve cancer by reducing fat.

She also drank green tea, green juices, and a juice made from apple, carrot, celery and beetroot.

First, it targeted and blocked different tumor pathways and growth factors. Second, it reduced the likelihood of cancer cells getting stuck in blood vessel walls where they could establish themselves and grow new tumors. Third, it would make chemotherapy more effective.

To boost the immune system, she took other supplements. Medicinal mushrooms, including maitake-D fraction extract, beta-glucans, MGN3 (a rice bran extract), DHEA and melatonin. She was also advised to eat all the day’s food within a narrow time frame so as to mimic fasting and help raise immunity.

All Jane’s instincts told her high-dose chemotherapy was entirely wrong, yet despite grave misgivings she agreed to it.

Even though her oncologist accepted it was a crude and blunt tool that caused a lot of collateral damage, she had nothing else to offer this patient.

But after several months, Jane was not prepared to put up with its debilitating effects any longer and managed to persuade her oncologist to lower the dose over the next four months.

Nine months later, well past the date when she was “supposed” to be dead, she was alive and sported blood markers that indicated no detectable cancer in her body. But she knew it was very likely the cancer would come back, so she maintained the protocol and added to it.

Time for IVC and UBI

The latter involves taking a syringe full of the patient’s blood, exposing it to ultraviolet C light, then reintroducing it into the body. This technique stimulates a powerful immune response, kills pathogens and improves the abnormal micro-environment around cancer cells.

At the same time, Jane added shark liver oil to her regimen as well as genistein, quercetin, chromium picolinate and vitamin K3. She also focused on establishing a good balance of bacteria in the gut as this is so important for a healthy immune response.

She had some bad news when test results from her first integrative doctor found a large number of parasites called Blastocystis hominis in the gut. Treatment involved intensive therapy over several months with a lot more supplements and dietary changes.

All seemed well for the next four years, but in 2003 she was suffering with fatigue and night sweats. Tests run by a third integrative doctor she consulted suggested she now had acute myeloid leukemia (AML).

This was almost certainly a direct result of chemotherapy and radiation treatments which damage the bone marrow. Therapy-related blood cancers have an extremely poor prognosis.

The treatment prescribed for AML was yet more chemotherapy, which she considered madness, so she decided to step up her arsenal of helpers instead.

Diet, supplements and other natural therapies kept her cervical cancer at bay, but for AML, additional big hitters were required.

It was time to investigate drugs. . .but not the ones oncologists hand out.

Many approved drugs used for a variety of purposes also have anti-cancer activity. They are not approved for cancer, but any doctor can prescribe “off-label” drugs if they are so minded.

The first promising pharmaceutical she came across was the blood clot inhibitor, dipyridamole. According to the medical literature, this has powerful immune-protective and anti-cancer properties.

The next was lovastatin. As well as lowering cholesterol, it was found to cause pronounced apoptosis in her type of leukemia. She discovered that a combination of lovastatin with the anti-inflammatory drug etodolac multiplied the anti-cancer effect five-fold.

Each drug was low in toxicity and starved the cancer of major metabolic drivers in different ways.

Months later her blood markers were back in the normal range and she has been cancer free for almost 15 years.

A combination of approaches is needed

Jane’s recovery is truly remarkable considering she was diagnosed with cancer in the last century. She had to act as her own guinea pig to come up with a constellation of therapies to target cancer from all angles.

Jane has continued to research better approaches to treating cancer and now advises other cancer patients.

She believes today’s entire focus on genes in conventional research is wrong. It certainly has a place, but it should be combined with treating the altered metabolism that’s common to all cancers.

She writes, “In the mad dash to get rid of a tumor, the patient is over-treated with high levels of either chemotherapy, radiotherapy or targeted therapies. This approach is doomed to fail — it only makes the patient more resistant to future treatment.

“Focusing on the DNA does not affect the cancer ‘stem cell’. Cancer returns harder and more aggressively than before. The cancer mutates and eventually becomes resistant to these ‘targeted’ treatments.

“Treating the cancer metabolism on the other hand, alongside targeted approaches, will reach the stem cell and offer the real opportunity for a cure.”

Our last issue discussed an herbal extract that has so many applications, you could call it a wonder drug (if it was a drug…) If you missed this valuable news, it’s running again below.