Herbal Treatment for Malaria Now Known to Kill Cancer, Too 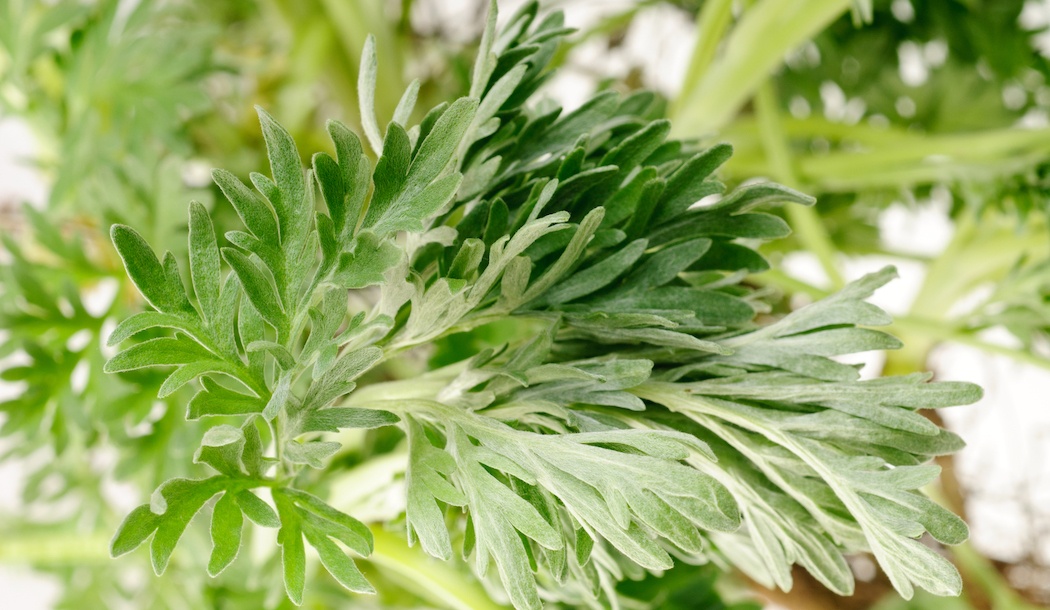 Best known as one of the ingredients in the highly alcoholic distilled spirit, absinthe, this bushy herb is also found in the cocktail staple, vermouth.

Germans call vermouth wermut, which reveals the name of one of the herbs it contains. Wermut translates as wormwood.

One particular species of wormwood also has considerable anti-cancer properties. .

Wormwood is a member of the genus Artemisia, which consists of 180 species. The most common type found in the US is Artemisia absinthium. You often see it in flower gardens. Although it doesn’t have a flower, it has beautiful silvery-gray foliage.

Another variety, Artemisia annua or sweet wormwood, is indigenous to China where it’s been used as a treatment for malaria for 2000 years.

Nearly half a century ago, the anti-malarial compound in the plant was isolated; it’s called artemisinin. This, along with various drug derivatives (artesunate and artemether are the most widely used), collectively called artemisinins, are now considered a first line treatment for malaria worldwide.

Besides its use as an anti-malaria drug, the genus has many other medicinal benefits.

Artemisia absinthium has a high content of nutrients and phytochemicals with antioxidant activity. These play important roles in protecting cells and organs from oxidative stress.

In a rodent study, an aqueous extract reduced the nerve damage caused by lead poisoning.

A similar study, this time with drug-induced liver damage, found that when given beforehand the herb protected the liver. When given afterwards, it restricted the amount of liver damage.

Scientists at the University of Freiburg, Germany, tested Artemisia absinthium in ten patients with Crohn’s disease, with another ten acting as a control group. After six weeks, blood levels of TNF-alpha, a pro-inflammatory cytokine, fell from 24.5 to 8.0 in the wormwood group. Among the controls it only fell from 25.7 to 21.1.

Clinically, the condition of the disease as measured by the Crohn’s Disease Activity Index fell from 275 to below 175 in the herbal group. Among the placebo users, the scores fell from 282 to 230. Remission of symptoms was seen in eight patients in the former compared to only two in the latter.1

In 2017 Artemisia absinthium was tested in a double-blind study in the form of an ointment in patients suffering from osteoarthritis of the knee. The results were compared to patients using a non-steroid anti-inflammatory drug, piroxicam, in the form of a topical gel.

While the drug performed better in relieving joint stiffness, pain relieving effects and improvements in physical function were the same for both groups.3

Artemisia absinthium also has substantial antimicrobial properties – which makes sense if the genus has activity against malaria — and has been shown to inhibit the growth of yeast.4

The anticancer properties of artemisinins were demonstrated by scientists from the Chinese Academy of Sciences in 1992. Tested against human leukemia, liver, and gastric cancer cell lines, the inhibition rate varied from 82 to 100%.5

Three years later Henry Lai and Narendra Singh from the University of Washington showed that artemisinin becomes toxic to cancer cells in the presence of iron.

They came up with the idea of teaming the herb with the metal because this is the mechanism by which artemisinin cures malaria. The malaria parasite has a high iron concentration. When the herb comes into contact with the metal it provokes a chemical reaction unleashing a storm of free radicals which attack the parasite’s cell membranes, breaking them apart to cause its death.

Iron influx is also high in cancer cells. They need much greater levels to facilitate rapid cell division for tumor growth. It’s a general property of all cancer cells. As in malaria, artemisinin becomes extremely toxic, forming free radicals in the presence of iron to kill the cancer cells or cause them to commit suicide.

The way it works is that transferrin, the protein that takes up iron, is transported into cells from the blood via transferrin receptors on the cell’s surface. The iron-hungry tumor cells take up the transferrin without detecting the attached artemisinin which is bound with transferrin at a molecular level.

Dr Lai explains it this way: “We call it a Trojan horse because the cancer cell recognizes transferrin as a natural, harmless protein. So the cell picks up the compound without knowing that a bomb — artemisinin — is hidden inside.”

In a later study published in 2008, Lai, Singh and colleagues developed an improved method of delivering iron to cancer cells. Tomikazu Sasaki, chemistry professor at the University of Washington and one of the authors of the study, said, “The compound is like a special agent planting a bomb inside the cell.”

Unlike toxic chemotherapy that destroys one healthy cell for every ten cancer cells, their new compound kills 12,000 cancer cells for every healthy cell. That makes it an extremely powerful drug with minimal side effects.7

Kills many cancers in many ways

An article published in August, 2018 reviewed a large number of studies that had investigated artemisinins. The authors concluded that these herbal extracts have “considerable anticancer properties” aside from the iron mechanism.

The review only covered the previous five years, yet even in that time 150 papers had been published on the herbal compound’s anti-tumor properties.

“Moreover”, they write, “artemisinins have no cross resistance with traditional therapeutic drugs, and they can reverse the multi-drug resistance of tumor cells.”8

In spite of these impressive findings and having an excellent safety profile, being well tolerated and affordable, there’s only a scant record of the use of artemisinins in humans.

A case report was presented by Dr. Singh concerning a man with cancer of the larynx. After being treated with artesunate for two months, the tumor was reduced by 70%. The treatment was reported to have reduced suffering and prolonged his life.

In a personal communication to California integrative physician Robert Rowen in 2002, Dr. Singh said he was following a number of cancer patients and there was “nearly universal improvement on artemisinin or its derivatives.”

Dr. Rowen himself also reported a number of successes.

One example was a case of Non-Hodgkin’s lymphoma which showed up as an egg-sized tumor on the side of the head. It spontaneously cleared up just four weeks after a course of artesunate.9

Dr. Len Saputo, another integrative physician practicing in California, likewise claims many successes. One of these was a woman in her sixties with advanced lymphoma that had spread to large parts of her body. He reported that she was alive, asymptomatic and doing well four years into taking the herbal extract.

Dermatologists in Germany experimented with artesunate “on a compassionate use basis” for two metastatic melanoma patients, as an adjunct treatment to chemotherapy. One experienced a temporary response, while the other saw stabilization of the disease and regression of metastasis. He was still alive 47 months later even though the average survival time for this condition is two to five months.10

42 months following surgery there were six recurrences of cancer in the placebo group (out of 12 patients) but just one out of ten among those taking artesunate.

Survival beyond two years in the artesunate group was estimated at 91% while surviving the first recurrence of cancer in the placebo group was only 57%.

Professor Sanjeev Krishna, who jointly led the study, said, “The results have been more than encouraging and can offer hopes of finding effective treatment options that are cheaper in the future.”

“Larger clinical studies with artesunate that aim to provide well tolerated and convenient anticancer regimens should be implemented with urgency, and may provide an intervention where none is currently available, as well as synergistic benefits with current treatment regimens.”11

They are currently recruiting for a follow-up trial.

How to take artemisinin

Artemisinin is available as a supplement. The dosage recommended with active cancer is between 200 mg and 500 mg per day. The derivatives are only available through a physician. And it appears most of the studies have been on the derivatives.

After five to seven days, absorption of artemisinin in the digestive tract falls substantially, so advocates of this treatment recommend it be taken for four consecutive days, followed by three days where none is taken. This cycle can then be repeated.

In less than one percent of cases it can cause inflammation of the liver. This does no permanent damage but the supplement would have to be stopped.

There may also be concerns with people who have too much or too little iron in their bodies. Antioxidant supplements might also reduce the effectiveness of the herbal extract.

I think this is a fascinating and very promising treatment, but I would only take it under the guidance of an integrative physician who has experience with it.