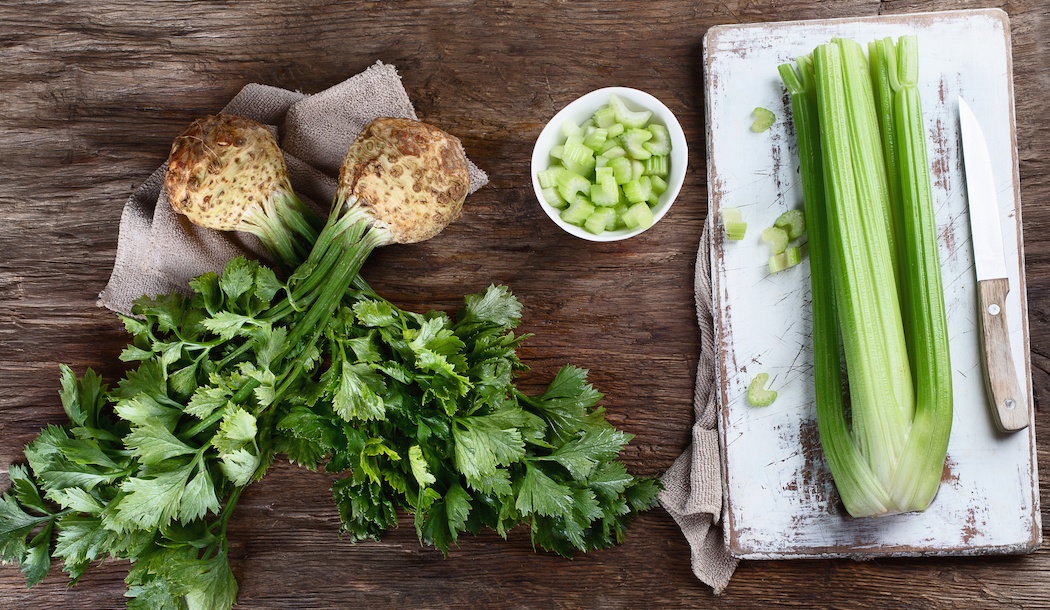 It’s the proverbial low-calorie snack… also the taken-for-granted turkey stuffing ingredient and the predictable garnish in a Bloody Mary.

But don’t underestimate the healing power of celery. Not only is it a dieter’s delight… it’s also a potent cancer fighter.

Read on to discover how much this humble stalk can do for your health.

Both celery and one of its relatives, parsley, contain the cancer-fighting bioflavonoid called apigenin, which we’ve written about before and has been studied in relation to breast and ovarian cancers.

A University of Missouri study found that apigenin shrank a type of breast cancer that’s stimulated by progestin, a synthetic hormone often given to menopausal women.

This study looked at certain mice implanted with a deadly, fast-growing human breast cancer, which were later treated with a progestin similar to those given to post-menopausal women. There was also a control group, which did not get progestin.

Some of the progestin group received apigenin, while the others did not.

The tumors shrank in the apigenin treated mice, and their breast cancer cell growth dropped to the levels of the control group (the ones with no progestin). The study co-author, Salman Hyder, noted that apigenin slowed the cancer in three ways by:

In other words, tumors grew in the mice not given apigenin. But with apigenin the tumors shrank, and weren’t as large to begin with.

Also, blood vessels that feed cancer cells had smaller diameters in apigenin-treated mice compared with untreated ones, resulting in restricted nutrient flow to tumors, potentially starving the cancer and limiting its ability to spread.

Researchers are still studying whether this holds true for humans as well as mice.

Meanwhile another study, this one at Rutgers University, found other anti-cancer compounds in celery, called acetylenics, can actually stop tumor cells from growing.

They suggest that drinking raw celery juice can prevent free radicals from harming your cells, which can stop cancer from developing in your stomach and colon.

So promising, you’d think the pharmaceutical companies would be all over this. But they don’t like to fund research into plant compounds because they can’t profit from a plant the same way they do a synthetic cancer drug. But you can.

Celery contains another cancer-fighting compound, a phytochemical known as coumarin.

Studies on coumarins show they’re effective for cancer prevention, and are capable of enhancing the immune activities of certain lines of white blood cells.

In a study at Tokyo Denki University, scientists examined 21 coumarins in these kinds of cancers:

The research showed coumarins had anti-cancer activity against the cancer cells. I should note that coumarin is also used as a precursor to coumarin drugs like warfarin and Coumadin. These prescription blood-thinning medications are used to help treat and prevent the formation of blood clots in the body. These synthetic drugs have a high-risk of serious side effects.

Celery, on the other hand, bestows many additional health benefits…

It may be the best brain food in your fridge

As you age, your brain tends to overreact by spitting out clouds of inflammatory compounds linked to memory lapses, fuzzy thinking, and brain fatigue. Celery protects your brain from these problems by telling the hyperactive immune cells to settle down.

This is great news since inflammation is a factor in cognitive and behavioral impairments associated with aging. For example, it can trigger diseases like Alzheimer’s and multiple sclerosis.

A new study published in the Journal of Nutrition evaluated luteolin, a celery flavonoid known to squelch inflammatory responses outside the central nervous system.1

This study showed that brain cells exposed to luteolin had a significantly lowered inflammatory response. Apparently, luteolin shuts down production of interleukin-6 (IL-6), a key cytokine in the inflammatory pathway, by a staggering 90 percent!

According to principal investigator Rodney Johnson, “This was just about as potent an inhibition as anything we had seen previously.”2

Celery benefits you in many other ways

This long, thin, green vegetable is actually part of the carrot family, along with parsnip, fennel, and parsley. Celery’s outer stalks, also called ribs, surround its tender, mildly flavored innermost ribs, the celery heart. It also has leaves, which are often mistakenly discarded as “inedible.” But nothing could be further from the truth, as celery’s leaves contain its highest concentration of nutrients.

Folklore from many cultures considers celery leaves an aphrodisiac, although there’s not much scientific evidence of that. But never mind, a celery stalk is loaded with other benefits.

Celery is chock full of vitamins and minerals, including vitamin K (good for blood and bones), vitamin C (an immune booster), amino acids, essential fatty acids, folate, iron, magnesium, manganese, phosphorus, potassium, selenium, zinc, vitamins A, B1, B2, B3, B5, B6, and E… plus many more.

In fact, one stalk of celery can impact your health in surprising ways:3

Putting celery to work for your health

To enjoy these benefits and more, juice a bunch of celery with a fresh orange for flavor, and drink this juice for 30 days. Or try celery juiced with a tomato and add some fresh onion and garlic to increase its anti-viral, immune-boosting, anti-inflammatory impact.

Of course, if you want the fiber in celery you’ll need to eat the stalk, not just drink the juice.

If you don’t care for the taste of celery but want its benefits, load up a stalk with organic nut butter spread. The celery will provide the crunch, but the nut butter taste will prevail.

Celery is an amazing food with a plethora of nutrients straight from nature. You can hardly go wrong. Even if you’re not on a “diet.” And yet, here are two important cautions:

First, lighten up on celery seeds during pregnancy. They contain volatile oils, flavonoids, coumarins, and linoleic acid, which could cause uterine contractions—which you certainly don’t want before the 39 or 40-week mark. This is a minor problem. I don’t think you’ll find seed in celery stalks.

Secondly, celery is one of the “Dirty Dozen”.

According to a report from the Environmental Working Group, conventional celery is one of the worst types of produce to purchase. Its soft, absorbent skin makes it especially prone to soak up and retain pesticides. Testing revealed residual traces from a staggering 67 pesticides in conventional celery. Would you like a little celery with your pesticides? Not me. I buy organic celery and I recommend you do, too.

Organic celery can be a terrific food to add to your daily anti-cancer eating plan. It’s inexpensive, so bring some home today.