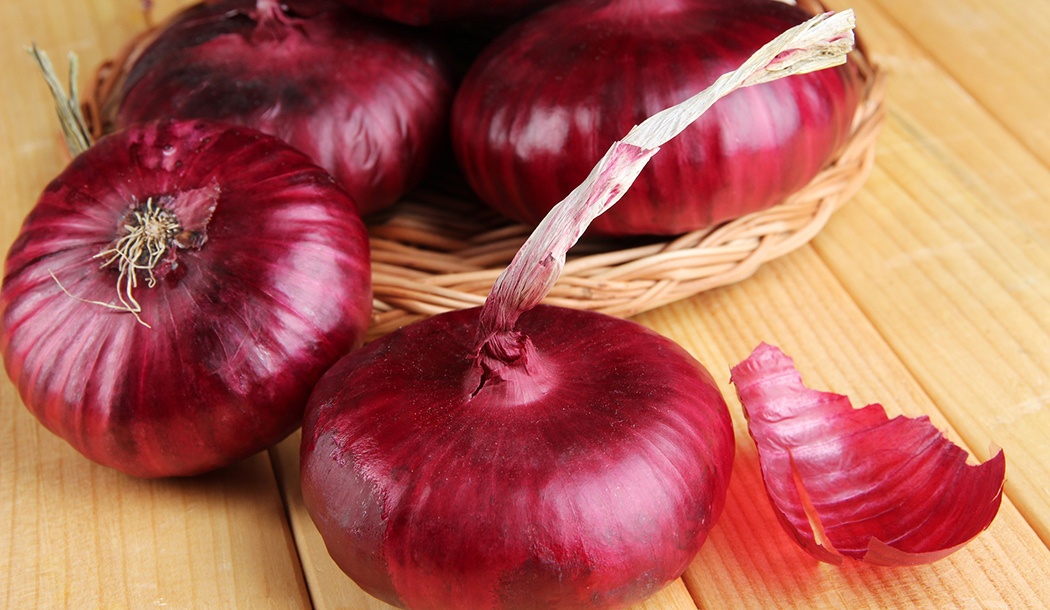 You’ve probably heard me talk about how the more color a vegetable or fruit has, the higher its antioxidant load. The same is true for darker-colored versus lighter-colored foods – darker colors win the antioxidant competition.

So it’s no surprise that red onions have more cancer-fighting potential than white onions. But there’s something else contained within those tear-inducing layers that could stop cancer in its tracks…

This red onion revelation came to light when researchers at the University of Guelph in Ontario tested five different varieties of onion extract against cancer. In a head-to-head test, the researchers put the extracts of these different cultivars of onion in contact with lab-grown human colorectal cancer cells.

But when the cancer cells were exposed to the red-onion extract, researchers found that not all onions are created equal. In their experiments, this type of onion obliterated as many as three to four timesmore cancer cells.

Those results led to an additional finding researchers weren’t expecting, which was that the Ruby Ring red onion tested particularly high for total phenolic content. (Phenols are compounds that are made by plants.)

Study co-author Dr. Suresh Neethirajan reported that all five species of onion were “excellent at killing cancer cells.” So it’s likely you’ll be giving yourself a natural cancer-fighting boost no matter what kind of onion you eat.

The researchers are hoping to confirm these results in human trials soon.

The onions studied were grown in Ontario, Canada. Onions there have been shown to possess higher concentrations of quercetin than onions grown elsewhere in the world.

Quercetin is a flavonoid compound found in many types of fruits and vegetables, as well as leaves and grains. It’s often used as an ingredient in supplements, and even in beverages and foods.

I like it for its natural antihistamine powers. I have sinus problems and hay fever allergies, and this is my substitute for antihistamine drugs, which damage memory and are a significant cause of dementia.

Quercetin frees up my sinuses, but you do have to take it regularly for at least six to eight weeks (although I do know people who say they get instant relief when they take it for a sinus attack).

Now, the onion studies at the top of this article didn’t single out quercetin as the anticancer “secret.” They tested extracts of the whole onion, which contains hundreds of different compounds.

Anthocyanin is the pigment that makes red onions red. This pigment also improves the ability of quercetin molecules to forage for dangerous free radicals – and then destroy them.

Thanks to that “power team” combination, quercetin and the other compounds in red onions appear to decrease your risk of developing prostate, colorectal, stomach, and numerous other cancers. They also help prevent against heart disease, and help eradicate diabetes altogether.

Yet another layer of cancer-fighting benefits…

One other advantage to onions when it comes to fighting disease is that they’re effective at killing breast cancer cells. According to researchers, onions have a way to break communication between breast cancer cells trying to band together as one.

Onions also create an “unfavorable environment” for cancer cell growth, prompting those cells to die. More exciting still, these findings are just about ready to be tested in human trials.

In addition, the researchers who developed the new extraction technique used in this study are hopeful that it can be employed in the future to add quercetin from onions to fortified foods, and possibly even medicines, because unlike most extraction methods, this one does not require any type of chemical or toxic solvent.

So the next time you’re at the grocery store stocking up on burger toppings or vegetables for a salad, choose red onions instead of the white. Granted, white onions still contain a potent load of antioxidants. But red onions just have more to offer.

And if you’re looking for the biggest nutritional benefit, eat those red onions raw. Cooking will diminish some of their antioxidant properties.

As Valentine’s Day draws nigh, you might be interested to know that some flowers are a lot more useful in your tummy than on your table. Our last issue explained why; if you missed it, it’s running again just below. . .