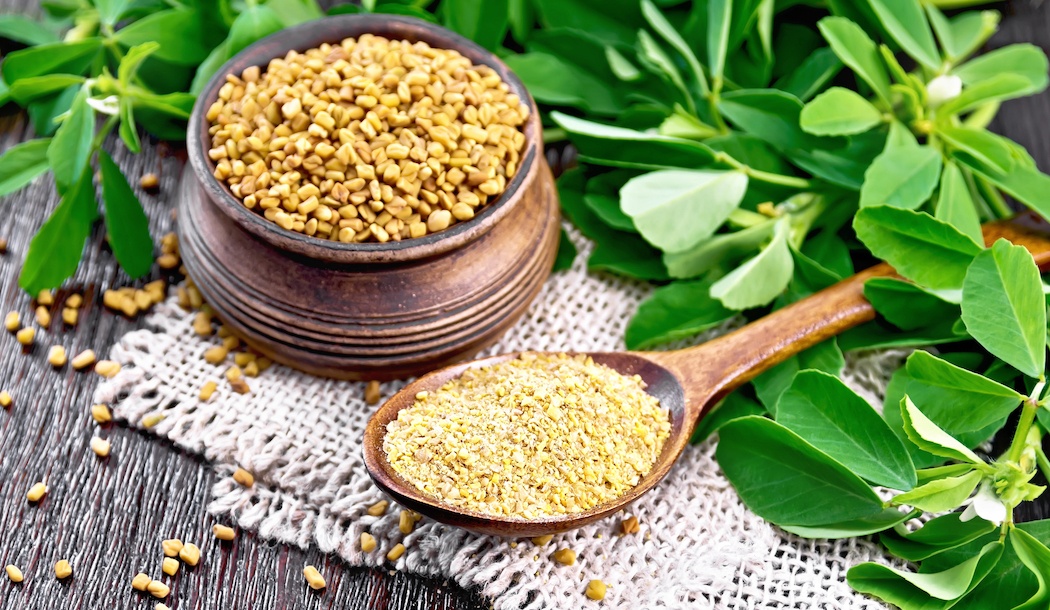 If you’ve ever enjoyed Indian food, then you’ve eaten the herb fenugreek. It has a distinct, bittersweet flavor reminiscent of maple syrup. And when the leaves and seeds are cooked, they develop richer, nuttier flavors that are perfect for curries and stews.

In addition to being a culinary staple in India, the Middle East, Africa and the Mediterranean, fenugreek is a popular remedy in Chinese herbal medicine for everything from high blood sugar and high cholesterol to lifting dampened libido.

The latest research shows that the herb fenugreek contains a potent compound called diosgenin that can help your body beat back cancer cells.

Diosgenin is a class of natural compounds called saponins. They’re water-soluble and found in fruits, vegetables, grains, legumes, tea, and several medicinal herbs that are known to enhance overall health.

Diosgenin has attracted the attention of scientists because of the many ways it can promote health, combat disease, and wage war against cancer cells in a way that’s safe and free of the toxic side effects of chemotherapy.

In laboratory culture studies diosgenin showed positive effects in cancers of the breast, liver, prostate, bone, larynx, ovaries, skin (melanoma) and blood. These effects are derived from different mechanisms depending on the tumor type. They include inhibition of cell growth, induction of apoptosis or cancer cell death, downregulation of Bcl2, an anti-apoptosis protein, upregulation of tumor suppressor genes p53 and p21, downregulation of key signaling pathways that help cancer to grow, and inhibition of matrix metalloproteinases, enzymes which help cancer to spread and invade other organs.

Diosgenin also lowers inflammation and acts as a powerful antioxidant.

In addition to the promising findings from cellular studies in a variety of cancers, research in rodents demonstrates diosgenin blocks tumor growth.

In a tumor model of chemically induced very early-stage colorectal cancer, administration of diosgenin to rats reduced the formation of aberrant crypt foci which are precursors to polyps.

Based on their findings, the authors of the study, from the American Health Foundation Cancer Center in New York, believe that “the fenugreek constituent diosgenin seems to have potential as a novel colon cancer preventive agent.”

A year later, the same group published a similar study in colon cancer that had already developed and begun to grow. They found that delivering diosgenin at a dose of 15 milligrams per kilogram resulted in a significant suppression (60 percent) in the incidence and invasive potential of the tumor and a dramatic reduction (68 percent) in the average number of tumors in each rodent.

Those results are pretty amazing. But it’s only the beginning…

Meanwhile, scientists from Japan investigated the effects of sanyaku, a traditional Chinese medicine derived from yams, which are also high in diosgenin.

They fed mice three different doses of sanyaku or diosgenin itself over 17 weeks. They reported that “groups of mice that received diosgenin or sanyaku at all doses yielded significantly fewer number of colon tumors” compared to controls. They believe their “results imply that the Chinese medicine sanyaku and the tubers of various yams containing diosgenin as food could be ingested to prevent colon carcinogenesis in humans.”

In a mouse study, researchers injected diosgenin directly into breast cancer tumors. This significantly inhibited the growth of two forms of human breast cancer, one of which is highly aggressive.

A comprehensive and critical review of the anti-cancer properties of diosgenin carried out by an international group of researchers concluded that, “A vast body of pre-clinical experimental evidence suggests that diosgenin has great potential as an anti-cancer agent.”

Despite this, no human cancer trials have been conducted. This could partly be down to the diosgenin’s low bioavailability. However, several microscopic nano formulations and delivery systems have been developed to help solve this problem. Studies show these semisynthetic derivatives of diosgenin also exhibit anti-cancer activity.

Although there’s little prospect of diosgenin being used in human cancer treatment soon, fenugreek seed extract, which is rich in diosgenin, has been clinically trialed in another condition relevant to cancer.

There’s a firmly established link between type II diabetes and cancer, so a remedy that can reduce the incidence of diabetes will lower the number of people getting cancer. Fenugreek could be such a remedy.

Fenugreek has been used in alternative medicine for the treatment of diabetes and the wisdom of this ancient approach has been borne out in modern day research.

There are several ongoing trials in humans, but one published trial enrolled twenty-five newly diagnosed patients with mild to moderate type-2 diabetes. They were divided into two groups – one took a daily extract of fenugreek seeds while the other took a placebo. At the end of two months the fenugreek group displayed improved glycemic control and decreased insulin resistance.

In another study, 66 patients with prediabetes took fenugreek as a powder twice a day before meals. An additional 74 patients acted as controls. After three years the researchers found the controls had a four times higher chance of developing diabetes compared to subjects in the fenugreek group.

Diabetes isn’t the only other condition to benefit from the diosgenin in fenugreek. In fact, there are many.

Last May researchers from ten countries published an updated literature review of diosgenin using both animal and human studies. The team reported on the following benefits, saying diosgenin:

The researchers summed up their findings by writing: “Overall, diosgenin demonstrated great promise in the treatment and prevention of a variety of chronic diseases.”

They added: “Diosgenin has been shown to act on several molecular targets that are essential players in the occurrence and incidence of many serious disorders. Its multitargeting capability allows it to influence multiple molecular targets and signaling pathways at the same time. Diosgenin has an edge over the most commercial medicinal medicines available today because of this property.”

Adding fenugreek to your diet

Diosgenin is not available as a supplement, but you can find the extract of fenugreek herb in tablet, capsule, or powder form. You can also purchase fenugreek tea.

The plant grows year-round with a peak season during the summer and early fall. Both the seeds, shoots and leaves can be eaten. All are used in Indian curry preparation. If you keep curry powder in your kitchen cabinet, you will most likely see fenugreek listed among the ingredients.