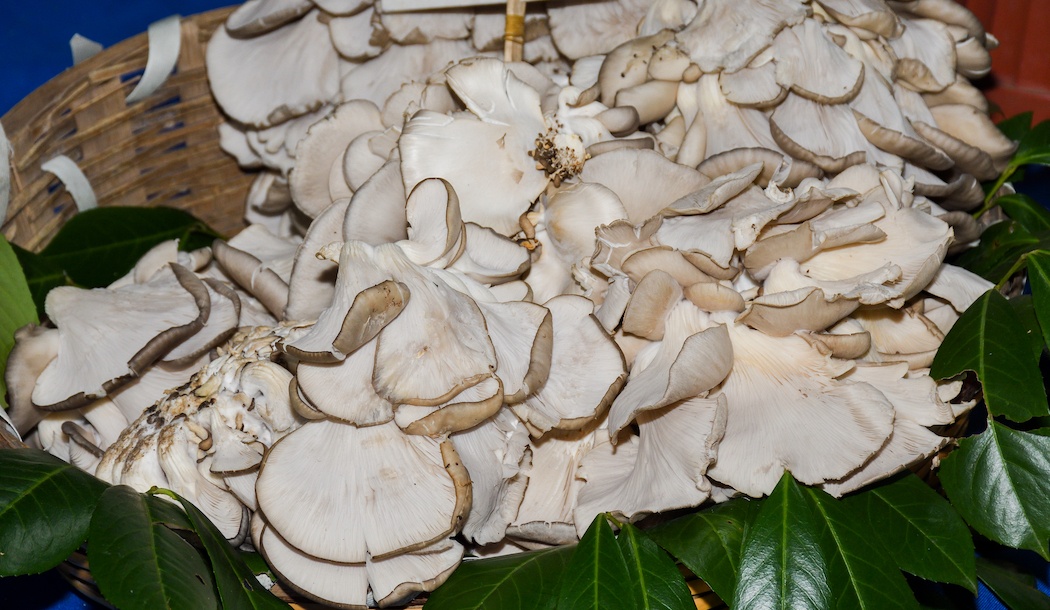 This Japanese health secret was once so highly treasured for its health benefits that it was literally worth its weight in silver.

Now, extracts of this natural secret have been proven effective against a variety of cancers. Not only that — the extracts reduce blood sugar, making them a valuable supplement for diabetics. And it looks like they prevent or reduce high blood pressure, so they’re worthwhile for cardiovascular patients as well.

What is this amazing natural secret? Keep reading and I’ll explain. . .

I’m talking about a food that originated high in the mountains of northeastern Japan, usually at the base of oak trees, but sometimes also under maples and elms. It only grew once a year, late in the season — from early September to late October.

This highly esteemed food, Grifola Frondosa, is also known as the “dancing mushroom” because people were said to dance for joy when they found it. Besides “dancing mushroom” it goes by the names “hen of the woods”, “sheep’s head”, “cloud mushroom”, and “king of mushrooms” (because of its large size).

You may also have heard it called the maitake mushroom.

For thousands of years, Asian healers have used edible mushrooms in soups, tonics, teas, prepared foods, and herbal formulas as an adaptogen and to promote health and longevity. Maitake held elite status in Japanese and Chinese cuisine.

The maitake mushroom is a polypore, meaning it lacks the gills on its underside that we often associate with mushrooms. Instead, it releases its spores—the “seeds” that propagate the mushroom—through small pores. Maitake mushrooms grow in layers of curved caps and can become quite large. Their body can spread to a width of several feet and weigh as much as 40 or 50 pounds. Some 100-pound specimens have been reported!

Popular in Asia for the past 3,000 years, it’s also found in Europe, the northeastern United States and Canada.

Until recently, maitake was merely the subject of folklore and traditional Chinese medicine. But since the 1980s, modern researchers have been studying its medicinal effects on a variety of health issues.

A great deal of evidence suggests maitake mushrooms are the most promising medicinal mushroom.

Maitake mushrooms are high in amino acids and in vitamins B-2, D, and niacin, as well as the minerals magnesium, potassium, and calcium. They’re even rich in fiber. But maitake’s real claim to fame is its polysaccharide fiber called beta-1,6-glucan, which stimulates the immune system naturally and lowers blood pressure.

Beta 1,6-glucan is a protein-bound polysaccharide — a large and complex molecule comprised of smaller sugar molecules.

These immune system cells play a central role in boosting your general resistance to disease and preventing free radicals from wreaking havoc on your body. They help your immune system respond rapidly to illness, and they also remove cellular wastes and speed tissue damage recovery.

Research now shows this powerful Japanese mushroom can help you beat cancer in three ways, by:

Published studies support all three of these benefits. The precise cancer fighting mechanism of maitake molecules is still unclear. Some researchers think that instead of attacking tumors directly, they stimulate production of more T-cells to fight cancer cells.

At the forefront of this promising research is Hiroaki Nanba, PhD, and professor of microbial chemistry at Kobe Pharmaceutical University in Japan. Not only is he a four-time author, but he’s also the world’s premier medicinal mushroom researcher.

In one study, Dr. Nanba gave the mushroom to cancer patients who took no anticancer drugs, yet witnessed a regression in their tumors.

Maitake D-Fraction® is a patented extract of the maitake mushroom, rich in beta-glucans, marketed as a dietary supplement in the U.S. and Japan. The terms “D-Fraction” and “MD-Fraction” simply refer to a concentration of maitake polysaccharides.

A phase I/II human trial showed that maitake extract stimulates breast cancer patients’ immune systems, which includes macrophages, which engulf and clean up cellular debris to keep cells healthy, and Natural Killer (NK) cells, which are your body’s “special ops forces” to search and destroy tumor cells. The study was published in the Journal of Cancer Research and Clinical Oncology.

A much earlier study published in the Townsend Letter for Doctors and Patients in 1996 involved 165 patients with advanced cancer who used maitake D-Fraction. It was found to be effective against leukemia, as well as stomach and bone cancers.

Tests on lab mice showed that extracted human bladder cancer cells exposed to either maitake or the cancer drug interferon, or both, responded better after 72 hours than those that received no treatment. The treatment reportedly shrank tumors by 75 percent. But the research is considered preliminary.

The study was performed at New York Medical College in New York, by Dr. Brandon Louie and his colleagues. It was funded internally by the college, and published in the British Journal of Urology International, a peer reviewed journal.

Maitake D-Fraction can also hold back production of other immune cells, restoring a healthy balance to your immune system and priming your body to respond “perfectly” to health threats.

Dr. Nanba and his associates also report some spectacular case studies, although these may be “best cases” and not necessarily representative of a broad selection of patients.

Dr. Nanba observed that D-Fraction is most effective against breast, liver, and lung cancers.

Maitake, like many other foods, makes valuable contributions to other aspects of your health besides cancer prevention. Whole foods treat your whole body.

Beta glucans lower blood sugar in animal studies and may do so in humans as well.

Maitake can lower blood sugar naturally due to its alpha glucosidase inhibitor, a specific polysaccharide called the X-fraction that appears to be the active compound with anti-diabetic properties.

Researchers believe mushrooms may work to lower insulin resistance and improve insulin sensitivity, which may prove especially valuable for people who are overweight, or those who have diabetes or hypoglycemia.

When eaten as whole foods, mushrooms are low in calories and high in fiber, which may increase feelings of fullness and therefore decrease overall food intake and help promote weight loss. Of course, if you cook your mushrooms in butter or other oils, the calorie count will mount.

In one study, researchers gave 30 overweight adults maitake mushrooms with no other dietary changes. During the two-month study, participants lost an average of seven to 13 pounds. And one participant lost a staggering 26.4 pounds. That’s a remarkable result. Usually it requires real sacrifice to achieve that kind of weight loss.

More than one study suggests that maitake may prevent and treat liver disorders. In one animal study, researchers fed rats a high-cholesterol diet fortified with 20-percent dried maitake powder. The animals on maitake accumulated less fat in the liver than did the control animals. Other studies suggest similar protective results.

You can eat maitake as a food — if you can find a source. Legend has it that those who know where to find them, only reveal it in their wills — and never before they die.

Besides their medicinal value, maitake mushrooms are reputed to be quite tasty.

You may be able to find fresh ones in season. You can also search for dried mushrooms in stores or on the Internet.

The easiest option is to take maitake as a supplement. Standardized beta-glucan extracts (MDF and maitake D-Fraction) show promise for their anti-cancer benefits and ease of use. Extracts, whole maitake powder, or a combination have been shown effective for many health issues.

Typical recommended daily doses for disease prevention range from 12 to 25 mg of the extract taken with 200 to 250 mg of whole powder, or 500 to 2500 mg of the whole powder taken by itself.

However, you’re wise to start slowly and build up, to avoid stomach upset at the outset.