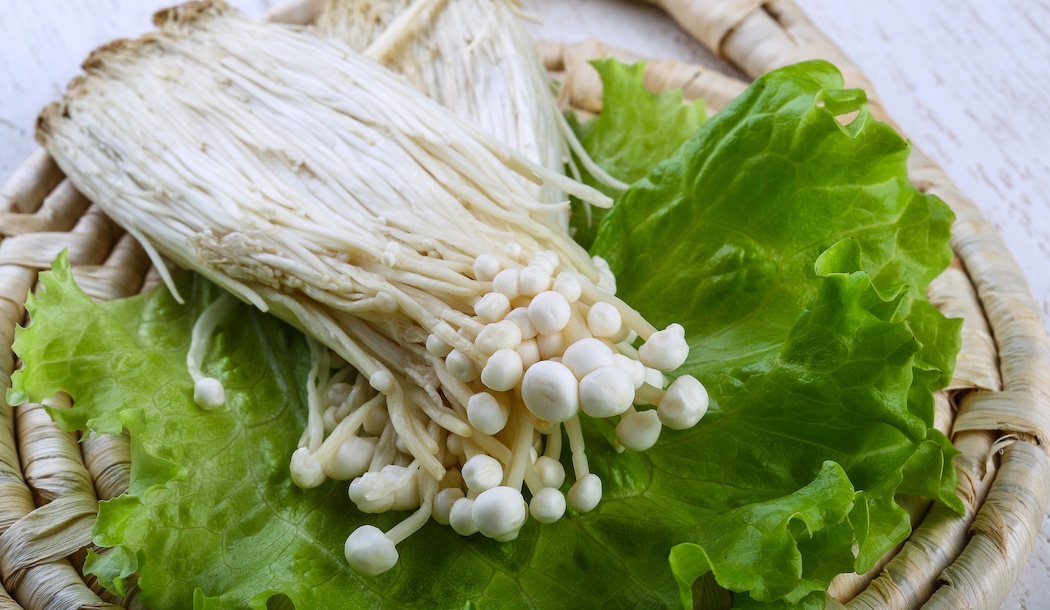 Longtime readers of this newsletter know mushrooms are among the most powerful foods for treating and preventing cancer. Some of the best cancer remedies are concocted from mushroom extracts.

Today let’s take a closer look at the Japanese enoki mushroom, also known as golden needle, velvet foot and winter mushroom. Discover what this wonder-fungus can do for you…

Enoki mushrooms have been a prized feature in Chinese and Japanese medicine for centuries. Traditional Asian medicine credits these fungi with marvelous healing abilities including:

As if this weren’t impressive enough—enoki mushrooms are packed with antioxidant compounds that are known as powerful immune boosters—and fantastic cancer fighters!

These fabulous fungi grow in many places throughout the world, typically in dead conifer trees and stumps. They can look very different depending on where they grow. In the wild, an enoki mushroom is often short and brown with a wide cap. But when farmers and hobbyists grow them, they tend to have a whitish-gold color with longer stems and smaller caps.

Rather than having the ability to kill cancer directly, a study revealed that the secret power of this cancer-fighting fungus may lie in its rich supply of three immune-boosting nutrients called beta glucans.

These nutrients are types of fiber found in the cells of certain simple organisms such as algae, bacteria, fungi, and yeasts. But more complex plants such as oats and barley can also be rich in beta glucans.

The Chinese isolated three unique beta glucans in enoki mushrooms: beta-linked glucose, galactose, as well as mannose and fucose sugars (that’s not a typo – it’s “fucose” not “fructose”). These nutrients boost a cell’s production of nitric oxide—one of the key mechanisms our bodies use to destroy diseased cells.

Clinical testing on various medicinal mushrooms has produced a consistent pattern of enhanced immune response. But these tests are merely a confirmation of what a Japanese researcher first noted several decades earlier…

The first clues about the cancer-fighting strength of enoki mushrooms resulted from observations of Dr. Tetsuro Ikekawa, a former epidemiologist at the Research Institute of the National Cancer Center in Tokyo, Japan.

Dr. Ikekawa noticed that cancer rates in the Nagano Prefecture of Japan were significantly lower than those in surrounding provinces from 1972 to 1986. Upon further investigation, he discovered that this area was dedicated to growing enoki mushrooms.

Many people within this province ate higher quantities of these mushrooms because the farmers gave them away if they weren’t good enough for local grocers. Dr. Ikekawa found that these lucky folks tended to die far less frequently from cancer. In fact, the mushrooms seemed to be the magic bullet that cut their cancer rate in HALF!

Dr. Ikekawa concluded that the more enoki mushroom a person eats, the lower his or her chances of dying from cancer in the Nagano Prefecture.

In 1969, the journal Cancer Research published an article by Dr. Ikekawa that focused on the cancer-fighting properties of enoki and other mushrooms. This sparked additional investigation as Japanese researchers sought to isolate and identify the constituents in enoki mushrooms that provided the anti-cancer effects.

Scientists have continued to study the enoki mushroom in an effort to unlock its cancer-fighting properties.

Additional studies suggest that beta-glucans in the enoki mushroom may help people with cancers of the cervix, head, and neck. This isn’t to say it’s no good against other cancers, just that these three cancers were the ones specifically studied.

Early studies are showing promise for using the supplement’s immune-boosting abilities to help people suffering from acquired immunodeficiency syndrome (AIDS). It may also lower your risk for infections after surgery and trauma.

How to get enoki mushrooms

As noted, there are food sources for these cancer-fighting beta glucans. But you can also find nutritional supplements of enoki in pill or tablet form. These supplements are natural and safe, but you should still check with your medical provider before taking them—especially if you take medications for diabetes, high blood pressure or AIDS and AIDS-related complexes.

And you could always grab some enoki and other medicinal mushrooms from the grocery store and include them in your favorite dishes.