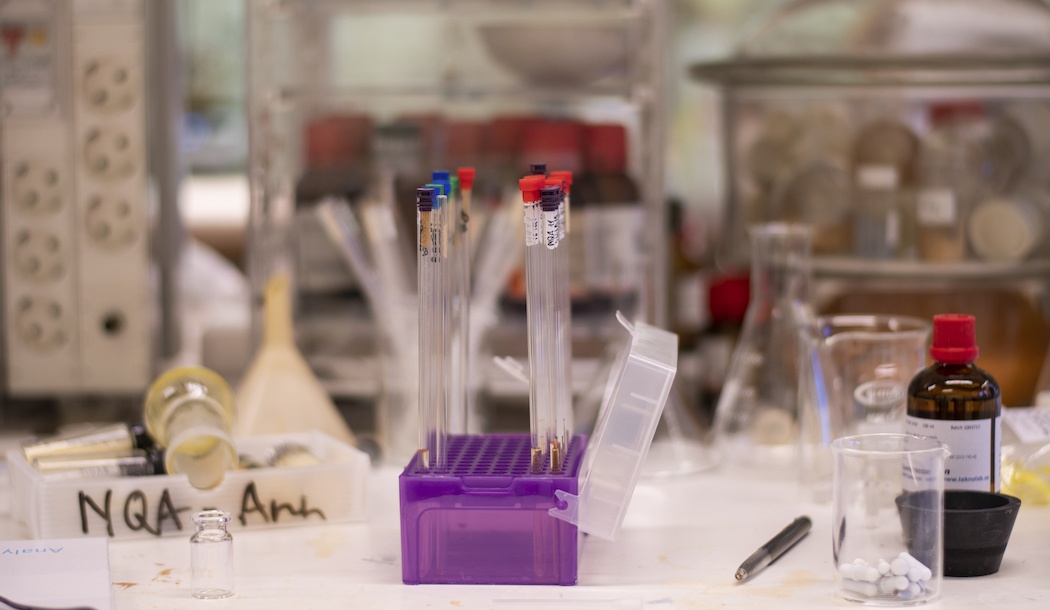 Detecting colon cancer as soon as possible can mean the difference between life and death. Yet patients often arrive at the doctor’s office with vague symptoms that could be brushed off as unimportant.

This has driven the development of blood tests to provide the earliest possible diagnosis in colon cancer and other cancers, even before symptoms appear. We’ve reported on quite a few that are in the pipeline. One new test uses a novel technology that can reportedly detect any type of solid tumor in the colon or anywhere in the body. Here’s the story…

Physical symptoms such as hoarseness, cough, back ache, pelvic pain, appetite loss, abdominal discomfort or fatigue could be minor irritations that disappear over time, or they could be a warning sign of cancer.

To help detect whether non-specific symptoms such as these are of no concern or are signs of cancer, scientists from the University of Oxford developed a blood test based on a new technology called nuclear magnetic resonance (NMR) metabolomics.

Detects if cancer has spread

NMR metabolomics identifies small molecules called metabolites that the body naturally produces from metabolism (the conversion of food either to energy or to the creation of building blocks for proteins, lipids, carbohydrates, and nucleic acids – DNA and RNA).

The precise pattern of metabolites depends on various factors including whether a person is healthy or not. In each of many types of disease, cells produce a unique metabolic “fingerprint” that can be detected in the blood. Cancer is one such disease.

Other blood tests are already available or being developed, but there is something unique about this test that makes it a first in the field of cancer diagnosis. This test can not only tell if a patient has the disease at an early stage, but it can also tell in an existing cancer patient if the tumor has spread or metastasized – no scans required.

In their study, published in the journal Clinical Cancer Research on the 4th of January, the Oxford scientists drew blood from 304 patients with non-specific but worrying symptoms such as persistent fatigue or weight loss.

The test correctly identified 94 percent as having cancer. While this test can’t pinpoint the type of tumor a patient has, it can distinguish between patients with localized or metastatic cancer with 94 percent accuracy. In fact, this is the first blood test to detect if cancer has spread without requiring input on the type of tumor the patient has.

Great potential in many diseases

The study’s first author, Dr. James Larkin, sees a great future for this test, not only for cancer but for other diseases.

“This test can identify people at high risk so they can receive urgent investigation, and those whose cancer has spread, so they can get the right treatment. Returning a result in a few days, it can also rule out cancer in people who do not have it, sparing them further scans, which involve a small amount of radiation, and saving…time and resources.

“We are only now starting to understand how metabolites produced by tumors can be used as biomarkers to accurately detect cancer. We have already demonstrated that this technology can successfully identify if patients with multiple sclerosis are progressing to the later stages of disease, even before trained clinicians could tell.

“It is very exciting that the same technology is now showing promise across a wide range of diseases. We are only really beginning to scratch the surface of what can be done with this technology and have high hopes for future discoveries as we explore what can be done”

He hopes to soon run a much larger trial on several thousand cancer patients to provide clinical validation of the test.

Dr. Fay Probert, who led the study, added, “The goal is to produce a test for cancer that any GP (general practitioner) can request. We envisage that metabolomic analysis of the blood will allow accurate, timely and cost-effective triaging of patients with suspected cancer, and could allow better prioritization of patients based on the additional early information this test provides on their disease.”

While NMR metabolomics detects any type of solid tumor, other blood tests are even more specific.

Although screening is available for some cancers, the process can be so invasive (and unpleasant) that compliance rates are low. One good example is a colonoscopy screening for colon cancer.

Colonoscopies are considered the gold standard for screening because they have high accuracy in identifying people who have precancerous polyps or colon cancer present. This accuracy is called sensitivity. Colonoscopies also have a high rate of specificity, which means they can also accurately identify people who do not have polyps or colon cancer.

What’s more, during the procedure, adenomas – or precancerous polyps – can be removed before they develop into cancer.

However, because of its invasiveness, many people choose to skip testing. To improve colon cancer testing compliance scientists have been working on a blood test specifically for this condition.

Every tumor was detected

A blood test called the FirstSight test by CellMax Life based in Sunnyvale, California, picks up the presence of circulating gastrointestinal epithelial cells that line the intestines. It also finds mutations in cell-free DNA – the type of DNA that’s shed from cells, once they’ve died, and then enters into the bloodstream. Each of these can be used to identify colon cancer.

In the first of two recent studies, scientists tested 354 patients between the ages of 45 and 80. After colonoscopy, eleven were found to have colon cancer. FirstSight picked up all eleven, a sensitivity rate of 100 percent.

Among the remaining patients judged cancer-free by colonoscopy, the blood test showed eight as having signs of disease, providing a false positive of about ten percent.

In the second study, 458 patients had blood drawn prior to undergoing colonoscopy. The results were consistent with the first study.

In August 2021 the test received the FDA’s Breakthrough Device designation. This is granted to novel medical devices that have the potential to provide more effective treatment or diagnosis of life-threatening or irreversibly debilitating conditions.

This complex process recognizes disease-associated patterns among billions of circulating cell-free biomarkers to detect cancer at its earliest stage. It does this by training the platform to learn, from thousands of cancer-positive blood samples, which biomarker patterns signify a cancer’s type, and effective treatment pathways.

The learning platform also uses healthy samples to help establish what a normal composition of cell-free biomarkers should look like.

Company officials say the test should be applicable for detecting many different types of tumors, but to date they’ve focused their efforts on diagnosing colorectal cancer.

Aasma Shaukat, gastroenterologist and Professor of Medicine at the University of Minnesota, who was not involved with the research, said, “The ability to detect advanced adenomas is incredibly important because we can remove them before they become cancerous.

The third blood test comes from China. This blood test not only picks up early-stage colorectal cancer but can help diagnose the disease years earlier than traditional diagnostic methods.

Speeds up detection by four years

The new test is a liquid biopsy, a type of test that detects genetic mutations or changes in DNA linked to cancer. It picks up on chemical units, called methyl groups, that can attach to DNA in a process called methylation – that turns genes “on” or “off.”

The scientists put the new test through its paces in a study using blood samples collected over seven years.

Using machine-learning algorithms to pick up very small changes in DNA, the system was trained on half the samples and tested on the remainder.

The test, called PanSeer, picked up 88 percent of participants diagnosed with cancer and correctly identified those without cancer 96 percent of the time. More important, it detected cancer in 95 percent of individuals who had no symptoms but received a diagnosis up to four years later.

Dr. Eric Klein, from Cleveland Clinic’s Taussig Cancer Institute, who has been involved in liquid biopsy research explained, saying, “This is an exciting study which provides further confirmation that methylation-based assays can detect cell-free circulating tumor DNA and may form the basis for new screening tests that detect cancer at early stages.”

Samantha Harrison, a senior early diagnosis manager at Cancer Research UK, said, “The PanSeer test has achieved encouraging initial results. Promisingly, the test may be able to detect cancer in blood samples taken years before diagnosis. But these are early results that now need to be validated in larger studies.”