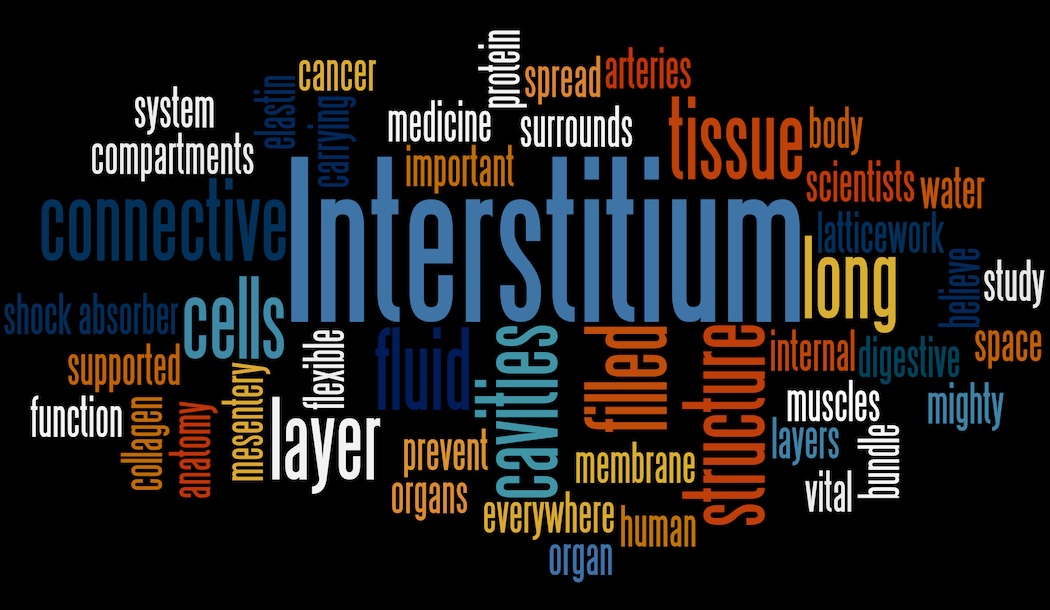 It seems incredible that scientists have discovered a new human organ. I mean, they cut people open right and left (living and dead). How could they miss anything?

Well, they did. A new organ has been identified. Actually, two. Plus a new “structure” that is not quite an organ.

First, the “structure”: In 2017, an elaborate system of drainage vessels was seen in the brain for the first time. Until then their existence was suspected, but not certain.

And then there’s the mesentery. Thought to be just a few fragmented structures in the digestive system, the mesentery was found to be a single structure and has now been officially reclassified as an organ

But the third and last is the most important: Last year another suspected new organ was discovered called the interstitium (pronounced interSTISHum.)

Remarkably, if confirmed, the interstitium will become the largest organ in the human body by volume. This previously unseen structure may change our understanding of many body processes affecting both health and disease, and the reason some forms of alternative medicine work the way they do.

It might also explain how cancer spreads throughout the body.

Two of his colleagues, David Carr-Locke and Petros Benias, part of an interdisciplinary research team, approached him with an unusual image they’d seen with the help of a new instrument called a probe-based confocal laser endomicroscope. This device allows scientists to view living tissue in detail within the body.

To study what they’d seen under a microscope, tissue samples were removed from the patient, quick frozen, cut into thin slices and amplified with a green dye, so differences in microscopic structures could be seen clearly.

Viewing the large duct that drains bile from the liver, they could see dark bands separating a strangely shaped, bright, fluid-filled three-dimensional latticework of proteins, connective tissue (bundles of collagen and elastin) and unknown cells. No one had ever seen this phenomenon before.

In further research, scientists uncovered the mysterious latticework everywhere they looked. Under the skin; lining the gastro-intestinal tract, urinary system and lungs; in the fascia between muscles; and in connective tissue surrounding arteries and veins. The structure makes up one-fifth of all fluids in the body – a huge 10 liters.

To Dr. Carr-Locke “it became clear that this was a previously unrecognized universal system throughout the body that connected certain organs with each other.”

The three scientists together with eight other colleagues published their findings in Scientific Reports last year. Whether this can be classified as a new organ, as they suggest, will have to be confirmed by other research groups.

Although their existence was known, these fluid-filled spaces – making up the interstitium (from the Latin meaning the space between) — had never been seen because, under normal circumstances, tissue samples are fixed in formalin before they’re observed under a microscope.

Formalin is a solution of formaldehyde, which kills living cells. Its use clears the fluid from the interstitium sample and collapses the spaces so they appear solid on biopsy slides.

This caused the, ahem, still living scientist on the other end of a conventional microscope to assume he was just looking at a dense wall of collagen alone. Sometimes faint little white cracks could be seen in it, but these were thought to be tears in the tissue. Now they know these are remnants of former interstitial spaces.

The researchers described the interstitium as a pre-lymphatic highway of moving fluid that drains into the lymphatic system and ends up in the lymph nodes.

The lymphatic system is an extensive network of vessels that helps rid the body of waste and transports fluid containing white blood cells — lymph — throughout the body.

The researchers believe the interstitium serves as a shock absorber for tissues because it can be compressed, stretched and expanded, and is seen in all moving parts of the body. They also think it plays a role in edema – an unhealthy condition in which excess fluid accumulates in body tissues.

But the effects of the interstitium could be more far reaching.

Commenting on the implications of their discovery, Dr. Theise said, “If this organ is present in every tissue and other organ the way the cardiovascular and lymphatic systems are, then we have an incomplete understanding of the entire body.

“This is basic anatomy, basic physiology. I don’t think there’s anything that doesn’t get changed by this.” For example, he suggests that maybe fibromyalgia has been such a medical mystery “because we haven’t recognized the compartment of the body that’s affected.”

Dr. Michael Nathanson, head of digestive diseases at Yale University School of Medicine, agrees that the New York team seems to have uncovered “a completely new concept” which could become altered in disease or play a role in driving disease.

Dr. Theise and colleagues think that as the cells and collagen bundles in the interstitium change with the aging process, they may contribute to skin wrinkling, limb stiffening, and the progression of fibrotic, sclerotic and inflammatory diseases.

Although the cells in the interstitium cannot be identified as yet, the scientists believe they could be mesenchymal (adult) stem cells, which can contribute to the formation of scar tissue seen in inflammatory diseases.

Dr. Theise added that their findings have the “potential to drive dramatic advances in medicine, including the possibility that the direct sampling of interstitial fluid may become a powerful diagnostic tool.”

This is all speculative, but the possibilities are exciting.

Surprisingly for an orthodox scientist, he said the protein bundles seen in the space are likely to generate electrical current as they bend with the movements of organs and muscles around them, and may play a role in techniques like acupuncture.

In an interview he added, “And this is where people who are interested in fascia, such as osteopaths or some people who do body work like Rolfing or cranial-sacral practices have been saying, that fascia also has fluid.

“But allopathic trained doctors like me and conservative anatomists of the world say, ‘No, when you look at it under the microscope, fascia is just dense connective tissue. What do you mean there’s fluid there? There’s no fluid there.’ “

Dr. Theise said one of his hopes from publishing this paper is that the osteopathic community would now have an anatomic explanation for their practices.

As you can see, Dr. Theise is no ordinary pathologist. For the last 30 years he’s practiced Zen Buddhism and yoga, and has given talks on theories regarding acupuncture and the seven chakra points, and how yogic practices influence cellular and molecular biology.

As part of their research, the New York scientists examined tissue from five patients with cancer of the stomach and skin (melanoma) to see if cancer cells were present in the interstitium. And that’s exactly what they found.

If cancers are able to invade the interstitium and extend into the lymph nodes, this could explain how tumors spread, especially those in the GI tract, they believe.

“This makes perfect sense when you consider the classic pattern of bile duct metastases,” Dr. Carr-Locke explained. “This tissue plane of the interstitium is very loose, which would make it easy for the cancer to spread up and down the duct before spreading outward.”

If this is a first step to how cancer spreads, it could lead to new ways of preventing it.

Dr. Carr-Locke continued, “It certainly would have implications for how we treat a tumor surgically.

“We know that manipulating a cancer can often spread cells from exposed surfaces; you can often see metastatic disease occur fairly soon after a tumor is resected. Maybe that happens through the interstitium, and maybe targeting that is an important step in oncology.”

Professor James Williams at the Department of Cell & Molecular Medicine, Rush University in Chicago, agrees that the interstitium likely plays a key role in spreading cancers of the GI tract and possibly other cancers, and could change the way doctors treat cancer and other diseases.