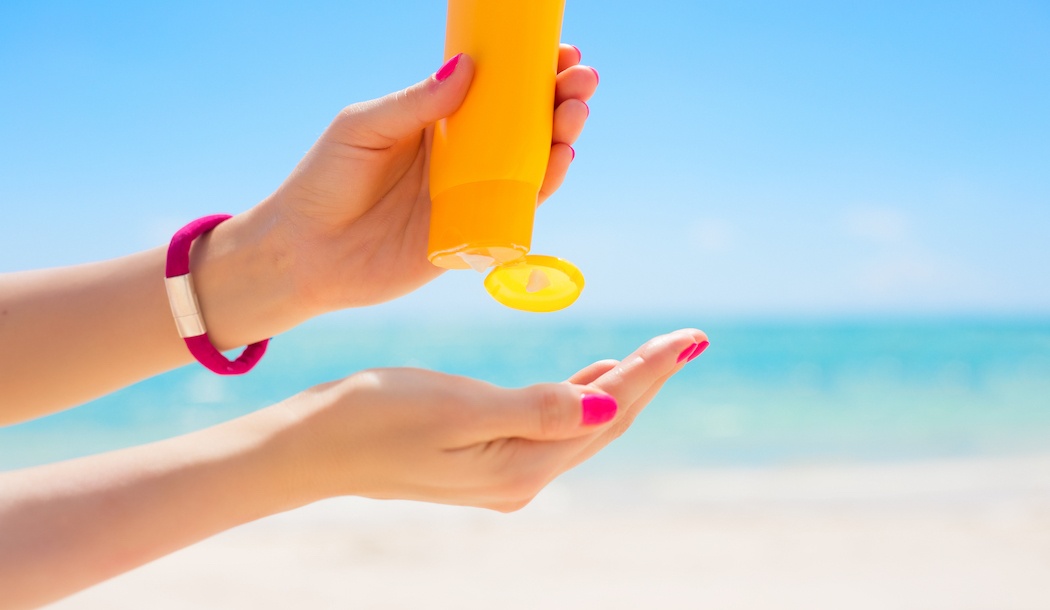 Summer time is often the worst time for exposure to a chemical that scientists called “a mutagen, carcinogen, and endocrine disruptor” in a scathing toxicology report.

This chemical was banned in food products and food packaging in 2018 because it was shown to cause cancer in animals. Trouble is, many people will still be exposed to this chemical this summer and what’s worse, they’ll be absorbing it into their bodies.

Why? This chemical is found in many sunscreens.

It isn’t often that a scientific paper is published with such a forthright statement as above, but U.S. and French researchers writing in a journal of the American Chemical Society felt very strongly after studying the sunscreen chemical benzophenone.

Now, you may think you’re safe if you look at the list of active ingredients in a sunscreen product and don’t see any mention of benzophenone. But that’s not true.

This is because benzophenone is part of a larger molecule called octocrylene—and that’s the one you’ll see on many sunscreen labels.

Octocrylene is one of 14 FDA-approved ingredients used in 3,000 sun protection products as well as shampoos, hair sprays, tanning oils, and conditioners.

In their article, published in Chemical Research in Toxicology in April, scientists from Haereticus Environmental Laboratory in Virginia and Sorbonne University in Paris, explain that manufacturers of these products are well aware that octocrylene is “contaminated” with benzophenone but claim it isn’t possible to remove it entirely and, in any case, the amounts involved are negligible.

However, the researchers strongly disagree that toxicity concerns can be brushed aside.

They write that benzophenone “is an established carcinogen.” It’s been shown to cause liver damage in guinea pigs, liver cancers in male mice, kidney cancer and leukemia in male rats and a form of cancer called histiocytic sarcoma in female rodents.

They continue by saying that “a preponderance of evidence indicates that benzophenone and its metabolites are potential endocrine disruptors”, altering the balance of thyroid hormones, exhibiting estrogenic activity, delaying testicular development and affecting the structure of female reproductive organs.

Sharyn A. Laughlin, M.D., a leading dermatologist from Canada, agrees saying, “Benzophenone is still the worst offender in causing contact dermatitis, and may induce urticaria and anaphylaxis. Absorption of both chemicals through the skin poses a potential threat to toxicities and diseases of other organs.”

And if you’ve left your sunblock lying on a shelf over the winter months, the risk of damage to your body can be even worse.

Since up to 70 percent of the benzophenone in sunscreen can be absorbed through the skin, the scientists wanted to know how much was present in these products, and whether octocrylene breaks down over time in a manner that would increase its levels in sunscreen.

So they tested eight products purchased from retail stores in France and another eight from the U.S. They also tested one sunscreen that didn’t contain octocrylene/benzophenone.

Researchers found the average concentration of benzophenone across the products was 39 milligrams per kilogram. This ranged widely among the products, from 6 mg/kg to 186 mg/kg. The chemical was not detectable in the product that didn’t contain octocrylene.

Next, they subjected the sunscreens to a recognized method of inducing accelerated aging. This six-week process reflects a single year of shelf life. The process almost doubled the average concentration to 75 mg/kg, ranging from 9.8 mg/kg to 435 mg/kg. Again it was not detectable in the product that didn’t contain octocrylene.

In the discussion part of their paper, the scientists didn’t hold back, launching quite an offensive against the industry and the regulators.

The FDA is “irresponsibly reckless”

“Besides use of sunscreen for sun exposure, sunscreen marketing and advertising claims encourage daily and constant use of sunscreen to protect against the perceived dangers of blue light-induced dermal damage from LCD displays from computers and other personal devices as well as from light transmission through building and car windows.

“If dermatologists and marketing propaganda are to be taken seriously, consumers would be using octocrylene-based sunscreens every day, with multiple re-applications through the day, throughout the entire year.”

The scientists believe that in the real world “benzophenone exposure concentration may easily exceed 100 mg/kg/day.”

Not letting up, they continue to say that, by not making any ruling regarding this contamination, the FDA is “irresponsibly reckless.”

Benzophenone isn’t the only concern. Octocrylene itself doesn’t get a free ride either.

The researchers describe octocrylene as “an endocrine disruptor, a developmental toxicant, and a metabolic stressor…Preliminary evidence potentially suggests that octocrylene may have a role in the behavior of tumorigenesis and carcinogenesis.

“Whether benzophenone and octocrylene products,” they continue, “should be allowed for public consumption should not be decided ‘in the back seat of a taxi by industry consultants’, but by careful and meticulous review of the literature and publicly available data.”

They finish by writing, “There is enough scientific literature to make an argument that octocrylene/benzophenone products can pose a threat to individual and public health.”

Well, that’s quite an assault. It’s rare to find such an expression of indignation in a scientific paper.

Perhaps more surprsing, the FDA has carried out their own studies on how octocrylene and other common UV chemical filters are absorbed into the body. The results weren’t good.

Enters the bloodstream after
a single application

The FDA discovered in their first study published in 2019 that all four chemicals they tested on 24 participants were absorbed in substantial amounts into the blood, far above the 0.5 nanograms per milliliter safety level, below which the risk is considered minimal.

They can also remain in the body for days, they found.

However, the FDA team was criticized for the way they conducted the experiment because they tested maximal use. This isn’t typically how people apply sunscreen in the real world, it was suggested, even though maximal use was in accordance with the product label.

The FDA listened and carried out a more comprehensive study in 2020, this time testing six UV filters in 48 healthy men and women in the form of a lotion, aerosol spray, non-aerosol spray and pump spray, and in a way that better reflects how people apply them in real life.

Regardless, the results essentially confirmed the findings of the first study.

All six active ingredients were absorbed into the bloodstream – even after a single use. Once absorbed, all chemicals remained above the safe threshold for at least seven days.

In fact, after a single application the overall maximum plasma concentrations of octocrylene was 1.5 ng/mL when used as a lotion, rising to 7.8 ng/mL after four days of use, fifteen times the safe limit.

But this looks astonishingly negligible compared to a close relative of benzophenone.

The dangers of oxybenzone

The worst offender was oxybenzone used as a lotion, the concentration of which was an astonishing 94.2 ng/mL after one day and 258.1 ng/mL after four days. The equivalent figures for the aerosol spray were 85.4 and 180.1 ng/mL. Together with another UV filter called homosalate, oxybenzone remained above 0.5 ng/mL for three weeks after it was no longer used.

Studies on oxybenzone, a compound structurally related to benzophenone (also called benzophenone-3 or BP-3), is considered to be an endocrine disruptor and is implicated in altered sperm function, altered breast development, birth defects, modified infant birth weight, and allergic reactions.

In January, a mice study found oxybenzone promoted the development of breast cancer. Lead scientist Richard C. Schwartz from Michigan State University said, “This is the first published result that makes a convincing case that BP-3 can change cancer outcomes. When there are alternatives, stay away from BP-3.”

In their press release following their second study the FDA wrote: “The findings in these studies do not mean that the FDA has concluded that any of the ingredients tested are unsafe for use in sunscreens…”

They are asking the industry to supply additional safety data on 12 active sunscreen ingredients and hope to establish final marketing requirements at some undisclosed date.

“Without further testing,” they write, “the FDA does not know what levels of absorption can be considered safe.”

Even if 0.5 ng/mL turns out to be too conservative and a higher safety threshold is warranted, it’s difficult to see how the continued use of benzophenone-3, at the very least, can possibly be justified.

How can a product be banned from use as a food flavoring, yet a closely related endocrine-disrupting chemical be allowed in a product where it’s absorbed into the body at a level that’s over 180 times the safe limit after just a single application?

No wonder the U.S. and French scientists wrote scathingly about the issue in their toxicology report.

So, should we be using sunscreen, and if so, how do we protect our skin during the summer months without slathering it with lots of harmful chemicals?

Over many years we’ve been conditioned by health authorities to avoid the sun because of the risk of skin cancer. But exposure to the sun is beneficial in many ways; in particular it allows the body to make vitamin D. This has multiple benefits including protecting against many cancers as well as viral infections such as the flu and COVID-19.

Michael F. Holick, professor of medicine at the Boston University Medical Center, and a vitamin D specialist, suggests we should give ourselves permission to expose our skin to the sun without protection for a specific period of time.

Since the level of UVB varies according to the time of day, weather conditions, skin color and skin type, it’s impossible to say what a specific period of time amounts to. So Prof. Holick suggests we estimate how long it would take to turn our skin a mild pink color and then enjoy the sun for a quarter to half this estimated time.

Only then protect the skin by using sunscreen. He suggests a sun protection factor of at least 15, preferably 30. The best types of sunscreens to use are physical sunscreens. Unlike chemical ones that work by sinking into the skin, absorbing UVA and UVB rays, physical sunscreens block UV by forming a barrier that sits on top of the skin which the rays bounce off of.

“Mineral sunscreen, if formulated correctly and applied correctly, is very effective. A lot of formulations have zinc only. They miss part of the UV spectrum. Mixing them together – zinc and titanium – provides broad spectrum protection that’s very comparable to what you get in a chemical sunscreen.”