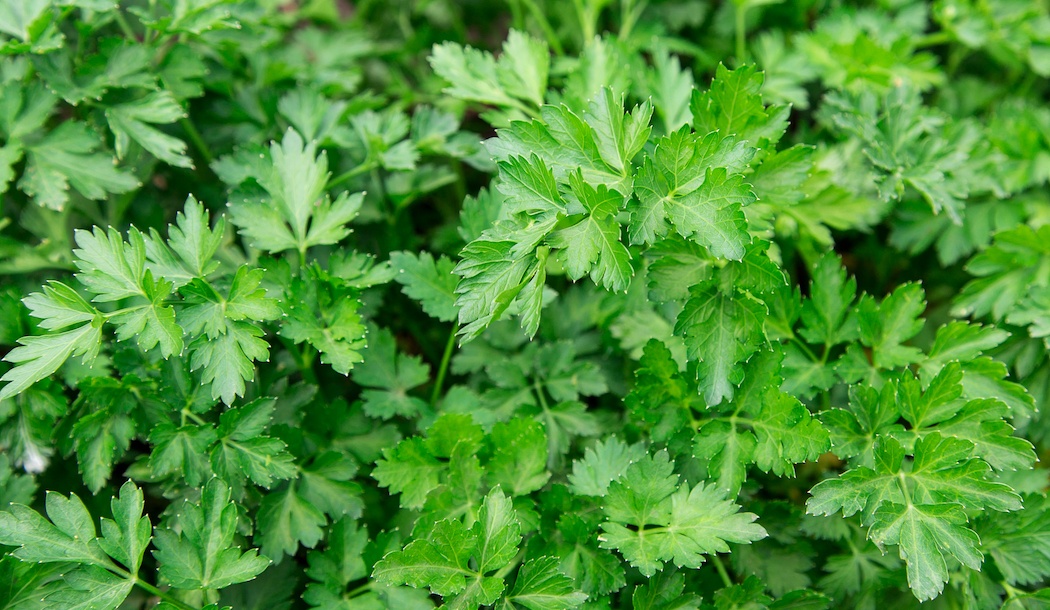 Every month of studying the latest and greatest research on natural and alternative cancer treatments uncovers the same truth: Increased consumption of fruits and vegetables helps reduce the risk of cancer.

The reason is that fruits and vegetables are high in cancer-fighting phytochemicals. So today, I want to take a closer look at one of them, apigenin, found in parsley.

Apigenin is a member of the flavonoid family. Flavonoids include anthocyanins, flavonols, flavanones, flavones, and isoflavones—all of which are potent antioxidants and have the power to fight cancer.

Apigenin is found in the highest amounts in parsley, celery, celery root, and chamomile, among other vegetables. Parsley takes the prize for the highest levels, with fresh parsley containing 215.5 mg of apigenin per every 100 gram serving while dried parsley has 45 mg per one gram serving.

Celery hearts have the next highest levels of apigenin at a very distant second with 19.1 mg per 100 grams, while dried chamomile flower comes in third at three to five mg per one gram serving.

The science shows that apigenin has many biological properties, including antioxidant, anti-inflammatory, anti-mutagenic, anti-carcinogenic, and anti-proliferative activities.

So, it’s no surprise that now several epidemiologic and case studies show evidence that apigenin reduces the risk of certain cancers.

In a 2015 review apigenin was shown to decrease tumor size in an aggressive form of breast cancer. Researchers – obviously with good reason – believe that apigenin could be a promising non-toxic cancer treatment in the future.

For colon cancer specifically, apigenin prompts apoptosis (cell death). Interestingly, the researchers found that its cytotoxic activity is comparable to what you get from the popular chemotherapy drug doxorubicin, but without the drug’s toxic side effects.

Apigenin also appears to affect leptin receptor pathways and has been shown to induce cell apoptosis in lung adenocarcinoma cell lines. In addition, apigenin appears to be an extremely beneficial compound when it comes to disrupting carcinogenesis (the initiation of cancer formation).

But that’s only the beginning.

In an epidemiological study in men, consuming apigenin, plus four other flavonoids (myricetin, quercetin, kaempferol, and luteolin) appears to lower the incidence of all types of cancer, not to mention the death rate from respiratory and gastrointestinal cancers.

In addition, a study from the University of Munich followed a group of adults who were given blanched parsley, which was measured out based on their body weight.

One day later, the researchers tested their blood and detected apigenin within the red blood cells of all of the study participants. This is exciting because it indicates that apigenin reaches red blood cells and can circulate through the body defending against cancer cells.

Perhaps most exciting, apigenin can retain its therapeutic healing qualities while also increasing the efficacy of different chemotherapeutic drugs.

More good news: It’s easy to add apigenin to your daily diet. The simplest way is to eat more parsley.

Fortunately, parsley can be added to just about any savory meal. You can use it as a garnish on pastas and soups, or mix it into egg bakes, omelets, and frittatas, or sprinkle it on pizza. You can also mix it right into salads or homemade bread, toss it in a smoothie, or make a pesto with it (meaning you’d mix the parsley up with pine nuts, olive oil, and parmesan cheese).

You can do all the same things with dried parsley as well, though keep in mind that fresh parsley will have more bioavailable apigenin. You can also take apigenin as a supplement.

Along with all the cancer-fighting properties of apigenin, parsley has three times as much vitamin C as oranges, twice as much iron as spinach, and is an excellent source of folate as well as vitamins K and A.

At the end of the day, parsley is an incredible, nutrient-dense powerhouse – yet far too many people just cast aside the garnish on their plates instead of eating it.

So, the next time you see it sitting on top of an entrée, make sure to cut it up and eat every last morsel – your body will thank you.