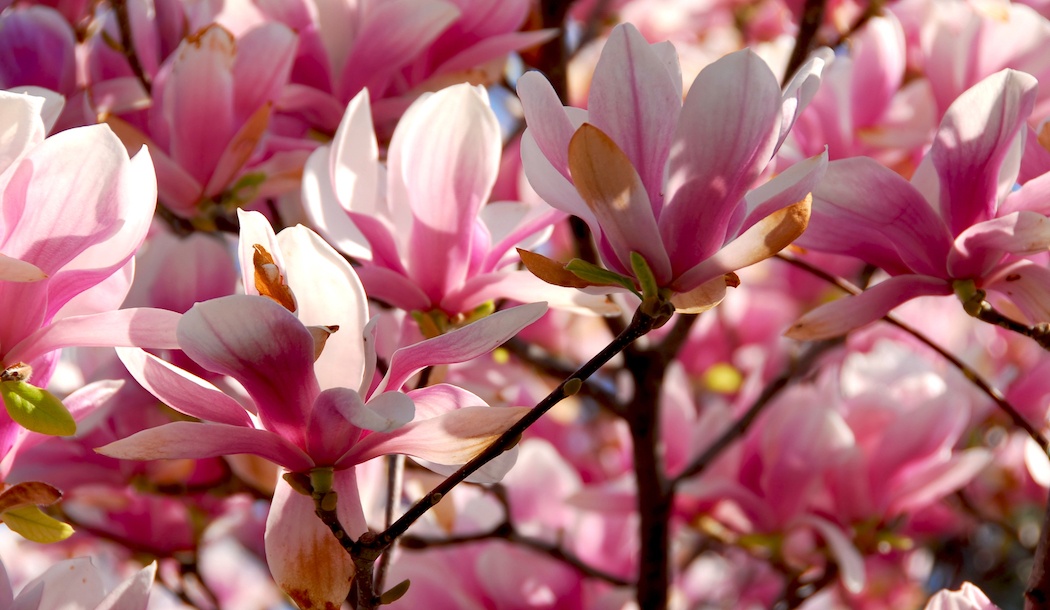 An ancient herb – used in Asian traditional medicine for at least 2,000 years – has now been shown to be effective against a very modern health problem.

The health threat? The fact that so many of us are overweight compared to say, 50 years ago, when the condition was fairly rare and mostly affected older people. These days, vast numbers of people from 5 to 85 are overweight.

The extra pounds make us more liable to develop cancerous tumors (and many other types of damage as well).

Magnolia is the ancient botanical that may help. And the topic happens to be appropriate to the season. Where I live, these beautiful flowering trees have been blooming away the last week or two. It’s nice to think the tree’s natural compounds may help rescue us from cancer risk.

A tree rich in medicine

According to historians, records show that magnolia bark, known as houpu, was used at least as far back as 100 A.D. as therapy for digestive issues and breathing problems like asthma. In addition, brewed as tea, people also took it to combat anxiety, fight inflammation, thin the blood and treat cancer.

In more recent times, since the 1990s, researchers have been teasing out the natural chemicals in magnolia that make the plant medically effective.

The revelation of some of those benefits comes at an opportune moment — especially in relation to how our modern weight gain is connected to cancer.

A large study now shows that half the cancers that occur in older, post-menopausal women are linked to being overweight. And those older women who are the heaviest experience twice the risk of dying from breast cancer as women who carry around the least amount of weight.1

I know a lot of people don’t want to hear it, but when it comes to cancer, thin is good, fat is bad.

But if you can’t shed the extra pounds, maybe magnolia can help you neutralize their cancer impact. Researchers believe that magnolia possesses bio-active chemicals that help to keep those extra pounds from being deadly.

For instance, scientists at Johns Hopkins have found that one of the important anti-cancer natural chemicals in magnolia, the substance called honokiol, can play a protective role against leptin, a hormone that circulates at higher levels as you gain weight.2

The body releases leptin in an effort to help you control your weight. Made and secreted by fat cells, under normal circumstances this hormone is supposed to accumulate toward the end of a meal. It sends a signal to your brain that you’ve had enough food to satisfy the body’s needs.

But if the functioning of this hormone goes wrong, you can experience a ravenous appetite that doesn’t let up even when leptin is released. And that may lead to gaining large amounts of weight and to type 2 diabetes.

Once your weight climbs, you also run the risk of becoming leptin resistant – your fat cells begin to give out larger and larger amounts of leptin but, for reasons not well understood, your brain loses the ability to respond to leptin at all.

Additionally, the increase in leptin ups your cancer risk.

According to researchers at the University of California-Davis, an important factor linking extra weight to cancer occurs when the circulating leptin helps suppress the immune system and keeps immune cells called T-cells from attacking and stopping the early growth of tumors.3 (They also point out that obesity liberates more nutrients that cancer cells can use to fuel their development.)

Some cancers “eat up” leptin

Complicating the situation, say the researchers at Johns Hopkins, some cancers including breast cancer are dotted with leptin receptors. When these receptors latch onto leptin, they send signals that encourage cancer cells to speed up their reproduction and invade other tissues. To add to your woes, this stimulates the production of new blood vessels that feed the tumor.

“Leptin-induced tumors quickly learn to evade all the usual biological checkpoints that have been put in place to keep the tumors from growing and spreading fast,” says researcher Dipali Sharma.

Dr. Sharma adds that leptin contributes to shifts in the shape of cancer cells and promotes their ability to penetrate into healthy tissue. That’s the reason the Hopkins scientists believe obese women more frequently have breast cancer tumors that get into their lymph nodes and spread.

In examining how the honokiol in magnolia can combat cancer, the researchers found that it derails some aspects of the leptin-centered signaling network in cancer cells.

They also discovered that, while aggressive breast tumors can shut down the cellular defenses of normal cells, honokiol can throw molecular switches that turn the protection back on.

Besides honokiol, magnolia makes another natural chemical that has shown promise in helping to fight cancer – a compound called costunolide.

This is a substance that magnolia trees use as a natural herbicide to keep other plants from invading their territory. And some researchers are looking to develop costunolide-based products as safer herbicides that can be used by farmers.4 It’s actually pretty common for some plants to secrete chemicals like this that suppress the growth of other plants around them. I suspect there’s a whole new area of research there if someone wants to look into it.

The researchers found that the addition of costunolide to chemotherapy renders cancer cells much more likely to succumb to apoptosis – programmed cell death. Apparently the magnolia compound causes extreme oxidative damage to the mitochondria in cancer cells, causing these energy-creating organelles to malfunction. The result – the cancer cells self-destruct.

In other tests of magnolia, research demonstrates its natural chemicals can:

As I said before, it looks like research on magnolia is accelerating just in time. As a country, we Americans seem to have an endless appetite for fast food and sweet, processed desserts that are guaranteed to test the body’s ability to resist cancer.

The most important first step in fighting cancer is to avoid those treats and concentrate on eating fresh fruits and vegetables. Then, in fighting off the damage that’s already been done, magnolia is going to prove to be a valuable ally.