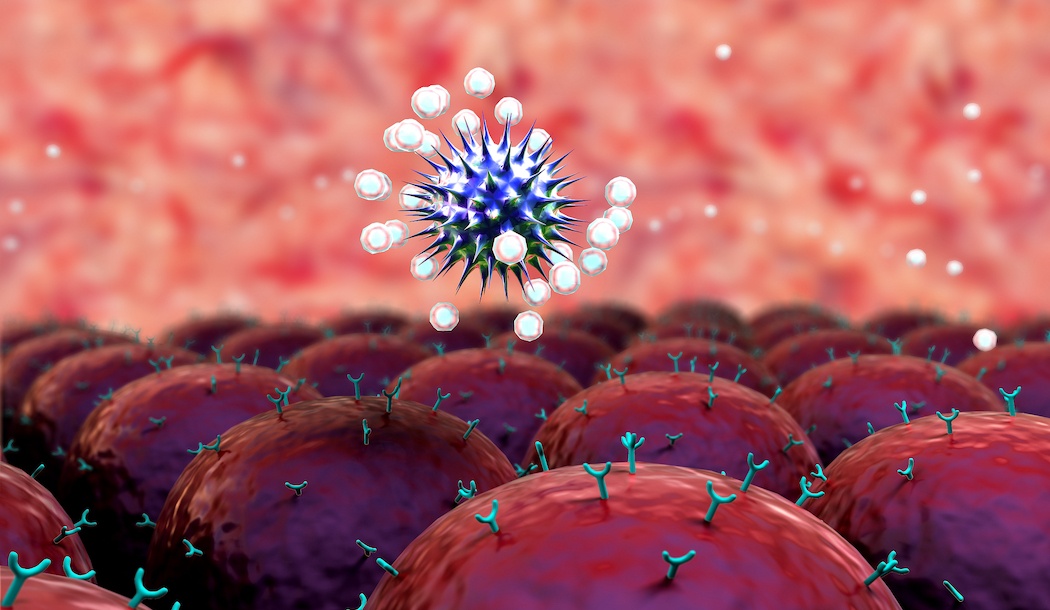 A controversial therapy being tested in the Ukraine on hospitalized patients with COVID-19 is surprising doctors.

Why is it controversial?

Because the treatment has been used outside hospital settings as an alternative treatment for cancer around the world. Here’s the extraordinary story.

The treatment is called GcMAF, which stands for group-specific component protein-derived macrophage activating factor. It occurs naturally in our bodies to activate immune cells called macrophages.

In laymen’s terms, macrophages are the body’s primary foot soldiers. They sweep through the body carrying out “search and destroy” missions to engulf and then digest pathogens, cancer cells, abnormal cells, foreign substances and cellular debris. They play a vital role in maintaining health.

Throughout life the body creates GcMAF naturally by releasing two sugar molecules from the Gc protein and then combining them with vitamin D. This enables the body to activate the macrophages.

However, in order to protect themselves from the immune system, cancer cells start producing large amounts of an enzyme called nagalase which prevents the Gc protein (also known as vitamin D-binding protein) from attaching to the vitamin.

The production of GcMAF is now blocked, the immune system can no longer do its job, and cancer cells are free to grow.

When doctors provide GcMAF directly to the body by injection, it’s able to bypass the binding process, allowing the macrophages to receive the signal to attack the tumor.

Nagalase also has another dangerous effect. Cancer uses nagalase to break through the connective tissues that surround cells so it can spread throughout the body. GcMAF works by boosting the immune system and preserving the integrity of connective tissue.

These are very powerful actions against cancer. Yet research suggests GcMAF has other important anti-cancer properties as well.

Dr. Nobuto Yamamoto was working with GcMAF at the Hahnemann Medical College in Philadelphia in 1991. In fact, he is the person who gave the molecule its name.

In 1997 he published a study showing that mice with transplanted tumors had more than double the survival time when treated with GcMAF compared to controls.

In another study with hamsters given squamous cell carcinoma cells, all 15 in the control group developed tumors after ten weeks and all died within 20 weeks. In the GcMAF group, two out of 14 did not develop tumors and there was a significant delay in the development and growth of tumors in the other 12. None of the GcMAF mice died within the 20 week study period.

In 2003, a collaboration between scientists at Harvard Medical School along with several other U.S. universities, and some in Germany and Japan, published findings in mice showing that GcMAF inhibits angiogenesis (blood vessel growth that allows tumors to spread).

Researchers in Japan have also carried out a series of lab studies. In a mouse model of human liver cancer they demonstrated that the GcMAF group had greatly suppressed tumor growth and progression compared to controls – a remarkable 97 percent tumor volume reduction after only three weeks.

They concluded that GcMAF has at least two novel functions against cancer:

Researchers in the United Kingdom agree and believe that GcMAF triggers even more positive cancer-fighting effects in the body. Their findings from studies with breast cancer cells led them to conclude that “GcMAF has multiple biological activities that could be responsible for its anti-cancer effects.”

In 2010, researchers at the University of Kentucky described GcMAF as “a potent inhibitor of tumor growth”, and in cellular studies were able to “show for the first time that [GcMAF] exhibits a direct and potent effect on prostate tumor cells in the absence of macrophages.”

These are just some of the many lab studies from different research groups around the world confirming GcMAF’s anti-tumor activity.

Even more interesting are the results from human use.

Since GcMAF is naturally produced by the body and appears to have no side effects, doctors at a number of clinics began using it with cancer patients.

Many compelling patient reports of miraculous recoveries soon started appearing online and in newspapers. Thousands of patients went on to report that they had been helped —even cured—by using GcMAF, which was mostly manufactured by a company called Immune Biotech, based in the United Kingdom.

In one case report involving 20 patients with a wide range of advanced cancers failed by conventional treatments, all experienced better clinical outcomes. Meanwhile, 19 out of the 20 experienced reduced nagalase following treatment.

The second series of case studies used an improved version of GcMAF where patients were treated at the Immune Biotech Treatment Centers in Europe. This case study showed for the first time in humans direct evidence of tumor shrinkage, verified by ultrasonographic images.

For example, advanced cancer patients experienced a significant 25 percent reduction in tumor size after only one week on average, the researchers reported.

In addition, Immune Biotech organized international conferences on GcMAF where doctors reported on patients with stage IV cancers who enjoyed complete remission after receiving a poor or sometimes terminal diagnosis.

Although human studies often follow successful lab work, the only scientist to carry them out was Dr. Yamamoto. He claimed that patients with 16 different types of cancer saw their tumors eradicated from 16 to 24 weeks with the use of GcMAF.

Of the reports he published, however, all except one were eventually retracted by the publisher because of complaints that they were unscientific—more on that in a minute.

The only paper to escape the purge was a study that included 16 prostate cancer patients where the cancer was confined to the organ. Findings were summed up as follows, “After 14 to 25 weekly administrations of GcMAF (100 ng/week), all 16 patients had very low serum nagalase levels equivalent to those of healthy control values, indicating that these patients are tumor-free. No recurrence occurred for seven years.”

Not only were most of Dr. Yamamoto’s human trial papers retracted for what many consider to be dubious reasons, but a number of other events occurred.

A Florida doctor who used GcMAF to treat autism died under what many believe were suspicious circumstances. A number of others in the holistic healing community who had been involved with GcMAF research also died within a short time of each other in what many termed ‘mysterious ways’.

In the United Kingdom, the offices of Immune Biotech were raided and 10,000 vials were seized. The CEO was convicted of manufacturing, supplying and selling an unlicensed medicine. He spent five months in prison and was then extradited to France, where he is currently in prison on charges related to GcMAF.

What’s more, all the GcMAF clinics in Europe were shut down.

Some describe the huge opposition to GcMAF from health regulators world-wide as a strategy to protect the cancer industry.

While I can’t speak to the accuracy of any of these conspiracy theories, Mr. Sardi is on to something– at least in the United States. We have a long and sordid history of government health officials discrediting or outright banning natural and alternative cancer treatments that have been successfully and safely used to heal people’s cancers. Chemotherapy, surgery and radiation remain virtually the only legal cancer treatments in the United States, although some less toxic immunotherapies have been approved and are gaining traction.

It’s no wonder many of today’s alternative medical doctors are treating cancer outside of the U.S. borders.

The Hope4Cancer Treatment Center in Tijuana, Mexico supports the use of GcMAF, calling it “one of the world’s most powerful immunotherapy agents.”

They collaborate with Saisei-Mirai immunotherapy centers in Japan who have been researching GcMAF since 1992. These cancer centers work with Japan’s University of Tokushima to manufacture and develop the product.

It’s important to note that GcMAF is never used alone at Hope4Cancer but as part of a treatment protocol called Sunivera.

The other treatments in this protocol include propolis– to stimulate natural killer cells– vitamin D, probiotics– to support the gut’s production of immune cells– plant proteins and an ATP inhibitor. Cancer cells need a lot more energy than normal cells, so the inhibitor – made from minerals and herbal extracts – helps to slow down cancer activity.

The treatment has no side-effects, apart from mild detoxification reactions, and has no contraindications, so the Sunivera protocol can be used with conventional cancer treatments if required or desired.

Another clinic that uses GcMAF is The Reno Integrative Medical Center in Nevada, which has been prescribing it for some years and supplied case reports for publication. They also use GcMAF together with a wide range of other treatments.

And now, let’s not forget about COVID-19.

As I wrote at the beginning of this article, GcMAF is proving beneficial to help severely ill COVID-19 patients heal from the virus.

In the Ukraine, a clinical study found that GcMAF saved all 16 patients in the GcMAF group from dying of COVID-19, while in the control group four out of 15 COVID patients died.

Italian researchers were also impressed by the ability of GcMAF to help COVID-19 patients by boosting immunity, limiting tissue damage and controlling inflammation.

The Ukraine study tested a special oral form of GcMAF, called Colostrum MAF. Colostrum MAF is a supplement developed by Saisei-Mirai and the University of Tokushima from bovine colostrum. Colostrum MAF is currently awaiting approval for clinical trial in COVID-19 patients in Italy.

It’s important to note that Saisei-Mirai and the University of Tokushima hold patents on the oral Colostrum MAF. Products offered online from other manufacturers will be fake.

Saisei-Mirai and the University of Tokushima have also developed a second generation injectable GcMAF product which they claim is 15 times more potent than the first. Developed in 2011, the injectable product was found to be safe and effective after treating more than a thousand patients.

We’ll keep you posted on any new developments on this treatment.