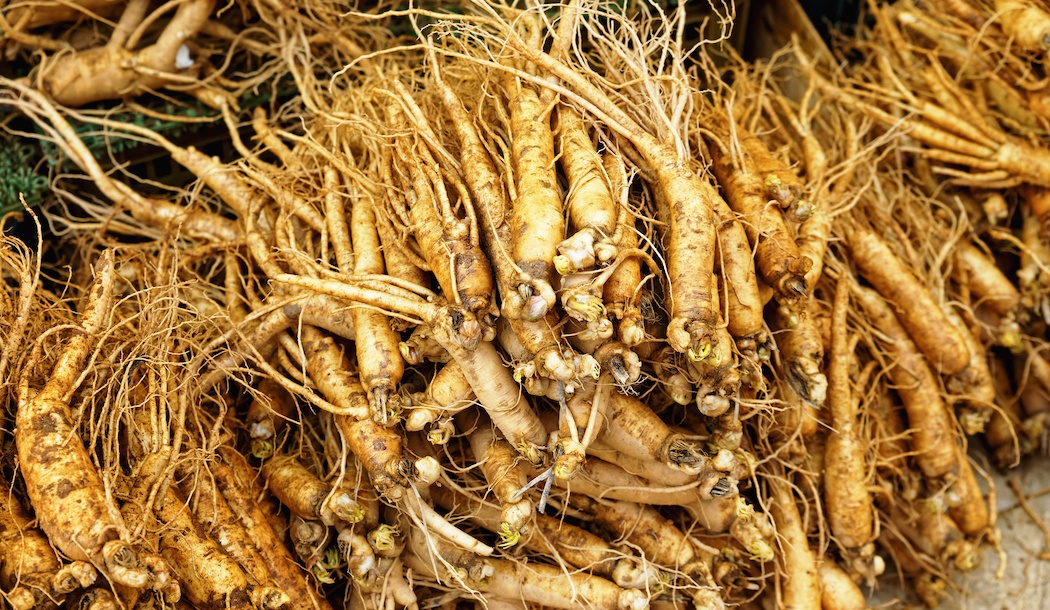 The herb ginseng is well-known around the world.

People take it to help with stress, fatigue, impaired immunity, heart issues, anxiety, symptoms of menopause and a dizzying number of other health issues.

Today, researchers are delving into the details of how its natural chemicals may be able to tame tumors and keep malignant cells from endangering people’s lives.

A Chinese myth holds that thousands of years ago the potency of ginseng was discovered by an emperor whose herbal research lab was his own stomach.

The story goes that his stomach was transparent – a “crystal-like belly”- that enabled him to analyze his bodily reactions to medicinal herbs. After he chewed on ginseng root, he enjoyed a “warm and pleasurable feeling,” which led him to recommend the herb as an aphrodisiac to anyone having problems with physical intimacy.1

The fact that ginseng’s root has a phallic shape also contributed to its reputation as an aphrodisiac. This follows the school of thought called the herbal “doctrine of signatures,” which means that the plant resembles a part of the human anatomy that it’s supposed to aid.

You might prefer a more modern approach. In the view of a consortium of European scientists, ginseng’s role as an adaptogen – a medicinal herb that can generally help us be more resilient in coping with stress – is only beginning to be scientifically understood. Over the last decade, some of this research has turned to cancer.

Many of the studies examining how ginseng affects cancer have focused on substances in ginseng generally referred to as ginsenosides. Investigations demonstrate that ginsenosides are active components of ginseng and can:

Showing promise against
many types of cancer

In one of the most recent studies on ginseng and cancer, researchers in Korea showed that red ginseng can potentially be used to stop the spread of lung cancer.

Red ginseng is a form of Asian ginseng that is produced using a specialized heating and drying process. In the latest tests at the Korean Institute of Science and Technology, scientists found that the ginsenosides called Rk1, Rg3 and Rg5 can suppress the development of lung cancer metastases.5

Added to that research, a study in Canada shows that the antioxidant chemicals in American ginseng work so well in protecting the skin against cancer that they could someday be used in sunscreen.

In the Canadian investigation, the researchers analyzed how ginseng could defend against oxidative sun damage caused by ultraviolet B rays and reduce photoaging from excessive amounts of sun exposure. They found that pre-treating skin before exposure to the sun reduced inflammation and prevented processes in skin cells that could potentially be the first steps in the development of skin cancer.6

All of the anti-cancer effects of ginseng that are emerging in this growing number of studies demonstrates why a review study of ginseng investigations shows that folks who use ginseng generally run a lower risk of cancer. This analysis, which involved nine studies encompassing more than 330,000 people, found that during the research the use of ginseng was linked to a 16 percent decreased chance of developing cancer.7

Another important benefit of ginseng for people coping with cancer is its ability to help cancer patients rebound from the debilitating fatigue that conventional treatment can induce.

Doctors refer to the weight loss, weakness and weariness brought on by cancer therapy as “cachexia.”  This condition has awful symptoms which can include muscle wasting, depression, lack of appetite and anemia. However, in a lab test of a ginseng extract on cachexia, researchers found the herb could lessen oxidative stress, reduce inflammation, improve cellular energy production and generally stabilize the body’s production of important proteins.8 As a result, patients feel better. In fact, numerous studies have found that ginseng can help cancer patients feel more energetic, enjoy a better appetite and have a more upbeat attitude.9,10,11

Obviously, ginseng contains so many beneficial natural compounds that its complex chemistry could keep researchers busy for several lifetimes trying to understand all of its benefits.

The main two forms of ginseng are Asian ginseng (P. ginseng), sometimes called Korean ginseng or red ginseng, that’s grown in Korea, China and other Asian countries, and American ginseng (P. quinquefolius). And even though the Asian type of ginseng has been used on that continent for thousands of years, much of the American ginseng grown in North America is usually exported to China. (Although because of our recent trade disagreements with China, much of this export has halted.) Interestingly, of all the ginseng farmed in the United States, about 95 percent is produced in just one small area – Marathon County in Wisconsin.

Ginseng is an herb that’s remarkably safe and well-tolerated. If you’d like to try adding ginseng to your nutritional supplement regimen, you can find supplements online or at most health food stores.