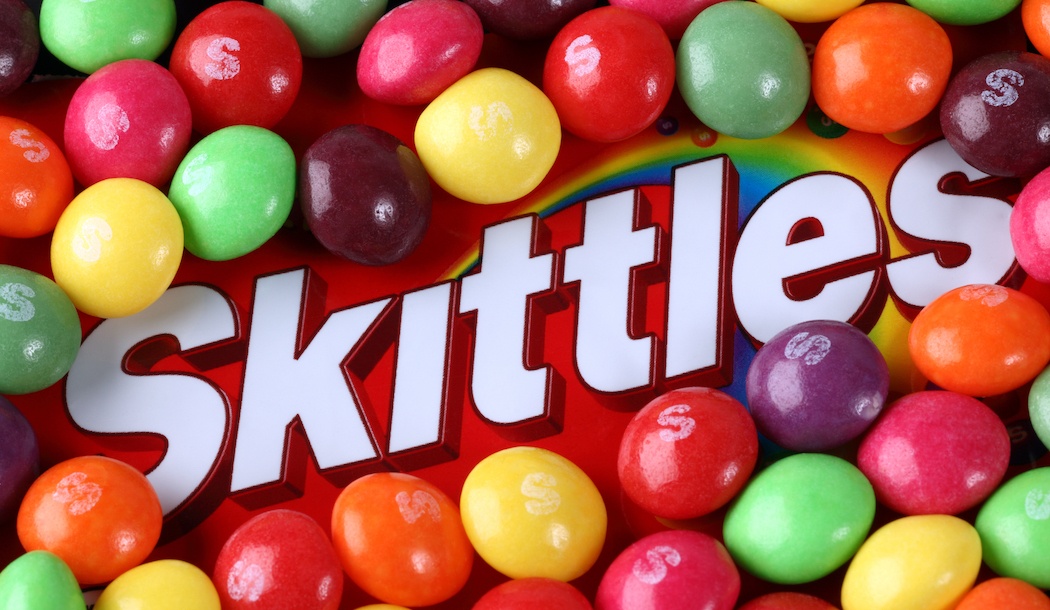 Few candies are as vividly memorable as Skittles, with their “taste the rainbow” taglines and vibrantly hued ad campaigns. They’re a go-to favorite for most kids and are often positioned at kid-eye-level in stores to make access that much easier.

But if those bags of candy had a big “Caution: Poisonous Cancer-Causing Chemical Inside” sticker slapped on the front, how many parents would still give into the begging? How many adults would grab a bag for themselves? According to a lawsuit that came out of California last summer, that kind of sticker is warranted…

Even though Skittles candies say they contain flavors like lemon, strawberry, and orange, the candy maker doesn’t come close to using real foods to season their treats. Instead, they mix up a large amount of sugar with a high quantity of toxins. Here’s the actual ingredient list, as reported by the Environmental Working Group (EWG):1

You’ll notice the boldface (mine) on all the chemical coloring ingredients. The focus with Skittles and plenty of candies like it is on making the candies appear as bright and alluring as possible, which they can only pull off with factory-made colors.

But this results in a huge and disconcerting health risk, which is particularly rattling when it comes to young children. The ability to discern bright colors is one of the first elements of sight that helps kids categorize objects around them.

As early as five-months-old, babies can see colors even as their vision continues to develop. With each passing year, they remain attracted to bright colors, which has even been shown to affect moods and behavior.2

This is the main reason the food, beverage, and toy industries operate in primary colors like red, blue, and yellow, along with secondary colors such as green, orange, and purple. Simply put, kids are drawn to these vivid tones much more than subtler shades like pink, brown, or gray.3

The worst offender on the list of ingredients above is titanium dioxide, or TiO2. Titanium dioxide is an odorless white powder with a bright, white pigment.4,5 You’ll find this chemical in a range of both consumer and industrial products, including everything from paint, paper, plastics, and rubber, to printing ink, coated fabrics, roofing materials, automotive products, and sunscreen.6

In packaged foods, titanium dioxide is used to preserve shelf life by blocking ultraviolet rays. It’s also used as a brightener for foods thanks to its light-scattering properties, which results in the best and brightest colors for whatever the chemical is mixed with.7

When added to food, titanium dioxide is officially supposed to be at a 99 percent purity level. But the problem with that seemingly high standard is that it opens the door to small bits of contaminants like lead, arsenic, and mercury.8

Regardless, this toxin is commonly added to chewing gum, candies, pastries, chocolates, coffee creamers, and cake decorations.9 But that’s just the case in the United States…

Shockingly, people in Europe are protected from the risks of titanium dioxide while those in the U.S. are not. Back in 2016, the European Food Safety Authority (EFSA) reported uncertainty about TiO2. They stated it poses a great enough concern for genotoxicity, which means it’s a substance with the ability to damage a person’s DNA and could cause cancer. If taken by mouth, absorption of titanium dioxide particles could accumulate in the body. In fact, some studies suggest that titanium dioxide can damage cells, resulting in inflammation and a chronic immune response.

“The extent and type of damage strongly depends on the physical and chemical characteristics of titanium dioxide nanoparticles, which govern their bioavailability and reactivity,” according to the authors of an article published in the National Library of Medicine.

So, in May of 2021, the EFSA took action and declared titanium dioxide no longer safe for use as a food additive.10,11 By some measures, this was still a late move. France banned the toxin two years earlier, back in 2019.12

Here’s where it gets interesting…

Sensing the change in opinion, Mars Inc., the maker of Skittles, vowed back in 2016 to begin to phase out titanium dioxide, even as the company stipulated there was no known risk to human health or safety. However, they’ve completely failed to follow through on those vows.

Understandably, people in the U.S. are outraged. One consumer from Oakland, California, has stepped up to try and do something about it by suing Mars Inc. In the lawsuit filed this past summer, the complainant alleges that Mars Inc. produced a candy that is “unfit for human consumption” with “heightened levels” of titanium dioxide.

Why is titanium dioxide so dangerous?

The U.S. Food and Drug Administration approved titanium dioxide for human consumption back in 1966. But I’d contend that science and medicine have both eclipsed archaic rulings like that one and clearly need to be reassessed.

In the meantime, this is one problematic issue over which you have a choice, and I implore you to not choose Skittles. Loads of candies are now being colored with natural ingredients such as beet juice, turmeric and seaweed, and most of them can be found on the shelves at natural grocers.13

By the way, if you visit this page within the EWG website, you can find out the “food scores” for common grocery store items based on nutrition concerns, ingredient concerns, and processing concerns. (Note: Skittles candy scores a perfect 10 on the EWG’s scale of best to worst, with one being the best score and 10 being the worst.14)

While we focused today on titanium dioxide, the other ingredients in Skittles candies aren’t good for you either. Many of these artificial colors and preservatives have been linked to chronic inflammation and illnesses like cancer. Not to mention the sugar!

In the many years that I’ve been interviewing and learning from alternative health doctors and oncologists, their message on this point has always been the same: If you care about your health, stay far away from highly processed foods that are chock full of chemicals and sugar. When it comes to candies like Skittles, what’s at the end of that colorful rainbow is diseases like cancer.