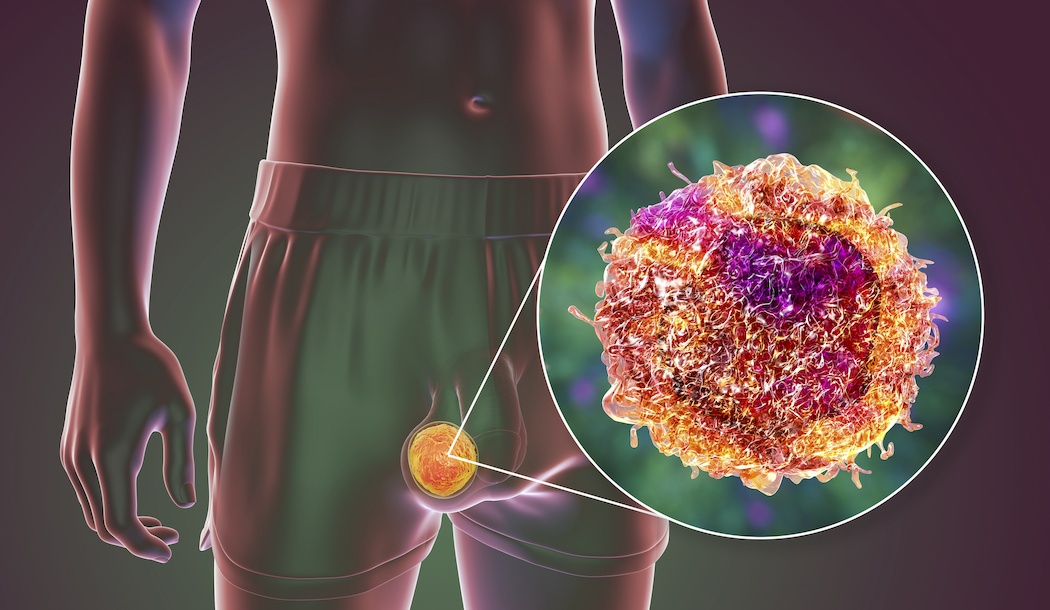 This cancer attacks many young men in their teens, twenties and thirties — people who think cancer is decades away for them, if they ever get it at all. But this particular cancer affects men under 40 almost exclusively. It’s NOT an old person’s disease.

In fact, this is the most common cancer in American males ages 15 to 34. What’s more, this cancer is becoming more common, which may be due to increasing exposure to environmental toxins.

Worse yet, it has few symptoms that would give you any hint you have a problem. That makes it especially risky, considering most men at this stage of life aren’t on the lookout for cancer symptoms.

Read on for the few warning signs to watch for. They could help you save a son or grandson who doesn’t know better.

I’m talking about testicular cancer. A cancer that attacks 90 percent of its victims without any noticeable symptoms, not even pain.

Now, there’s no need to be TOO alarmed. Only about 8,000 to 10,000 cases are diagnosed in the United States each year, and about 2,300 in the United Kingdom. It’s a pretty rare cancer. It’s also pretty curable. Conventional medicine claims a cure rate of almost 100 percent if the cancer hasn’t spread, and 80 percent even if it has spread.

All the same, who needs this problem?

Symptoms, when they happen, are easily
confused with other conditions

A young man with unexplained lower back pain should have it checked out. Right away. It could actually be a sign that he’s got cancer and it’s already spread to the lymph nodes in his abdomen. Of course, back pain is pretty common so this isn’t the most effective warning signal.

And I wouldn’t be surprised if the typical doctor tells the young man to just go home and take an aspirin.

My advice: Don’t let them put you off. If a young man has reason to believe his back pain is unusual and unexplained, he should insist on a proper testicular exam. Weak clues like this are about all you and your doctor will have to go on. Three out of four victims of testicular cancer have NO symptoms until the cancer is well advanced.

Of the few symptoms that do exist, most could also be caused by a virus or an injury. But since testicular cancer gives so few warning signs, a man should get any of the symptoms checked out immediately. Besides paying attention to back discomfort…

After a warm shower or bath, when the scrotum skin is relaxed, check for any lumps or abnormalities. Hold the penis out of the way and examine each testicle separately. Next, hold the testicle between the thumbs and fingers with both hands and roll it gently between the fingers. You’re looking and feeling for any hard lumps or nodules (smooth rounded masses). Or any changes in the size, shape, or consistency of the testes.

Be aware that a normal testis has an epididymis, which may feel like a small bump on the upper or middle outside of the testis. Normal testicles contain blood vessels, supporting tissues, and tubes that conduct sperm, also. It is easy to confuse these with cancer at first. So ask your doctor if you have concerns.

A lump may be very tiny, the size of a pea or smaller. It could be painless or could cause a dull ache. Don’t discredit a painless lump!

And don’t ignore these other trivial clues, either. They include: Any collection of fluid in the scrotum, feeling of heaviness in the scrotum, enlargement or swelling in a testicle, or discomfort or pain.

So if you notice enlarged or sensitive breasts, ask your doctor to perform this blood test.

During the diagnostic process, your doctor will also take a medical history to assess risk factors and conduct a physical exam, in addition to the blood test for HCG.

Plus, the doctor will probably order an ultrasound (no radiation involved), and may also want a CT scan or MRI to determine the stage of cancer and whether it has spread.

Does your age, family, or ethnicity put you at risk?

Nearly everyone is born into a family with some sort of health issue. That doesn’t mean you should throw up your hands and give up. It does suggest you should go the extra mile to control the things you can — especially if you already face a disadvantage for disease due to your age, heredity, ethnicity, etc.

Your risk factors for testicular cancer may include:

While you may have a number of these risk factors that you can’t control, be encouraged — here are two additional risk factors for testicular cancer that you have a great deal more control over…

Is this fashion statement worth the cancer risk?

Unhealthy fashion statements are nothing new. While many of these relate to women’s health issues, one is a guy thing. And a health menace… skinny jeans. They may seem harmless enough, but wait…

Scientists now warn that they can cause bladder problems and testicular torsion (twisting).

A recent study of 2,000 British men showed that one in ten men wearing skinny jeans experienced testicular torsion from their skinny jeans. Yet others had serious bladder problems and chronic urinary tract infections.

The testicular problems occur because the jeans constrict free movement of the spermatic cord, which then gets twisted, causing testicular torsion. This cuts off blood supply and can lead to gangrene, low sperm counts, and possibly cancer. Until scientists know for sure, ask yourself if this fashion statement is worth the cancer risk.

And then there’s this recreational pursuit…

A study from the University of Southern California (USC) in September, 2012, found a link between use of recreational (and medicinal) marijuana and increased risk of the types of testicular cancer with the poorest prognosis, as reported in the journal Cancer, a peer-reviewed journal of the American Cancer Society.

Scientists think that recreational marijuana use may be in part responsible for increasing testicular cancer rates. The researchers looked at the self-reported history of use of recreational drugs in 163 young men diagnosed with testicular cancer, compared to the rates of 292 healthy men of the same age, race, and ethnicity.

They discovered that the marijuana users were twice as likely to have testicular cancer subtypes called non-seminoma and mixed germ cell tumors. These subtypes carry a worse prognosis than the seminoma subtype.

This study confirms the findings from two earlier studies in the journal Cancer on the potential link between marijuana and testicular cancer.

Is the treatment for this cancer
worse than the disease?

The treatment for testicular cancer can involve serious and long-term repercussions, as shown by a study published in the journal BJUI, and conducted at the University of Oslo.

Researchers reviewed 40 studies published between 1990 and 2008. They found drastic side effects that should give any man pause about conventional treatments:

All these complications can last for a lifetime. Lead author of the study Sophie D. Fossa stressed, “It is important to focus on reducing risks through healthy lifestyle choices and consider important issues like preserving future fertility…”

She adds that the best way to slash your risk is to maintain an active lifestyle and healthy weight, avoid tobacco, and for doctors to “provide adequate follow-up for patients who could develop life-threatening toxicity”. Sounds like she could become an advocate for these alternatives…

We’ve learned of one approach that is specific to testicular cancer: Heat treatments.

Researchers at Johns Hopkins University think that heat therapy might be a viable treatment for cancer.

The testes are always a few degrees cooler than the rest of your body, making them an ideal location for cancer cells. This led Professor Robert Getzenberg and his colleagues to speculate that testicular cancer cells would respond well to heat treatment. They are now experimenting with heat-based methods of weakening cancer cells.

I’ll keep you posted on any new discoveries in this area of treatment.