The Tiny New “It” Food for Cancer and Disease Prevention 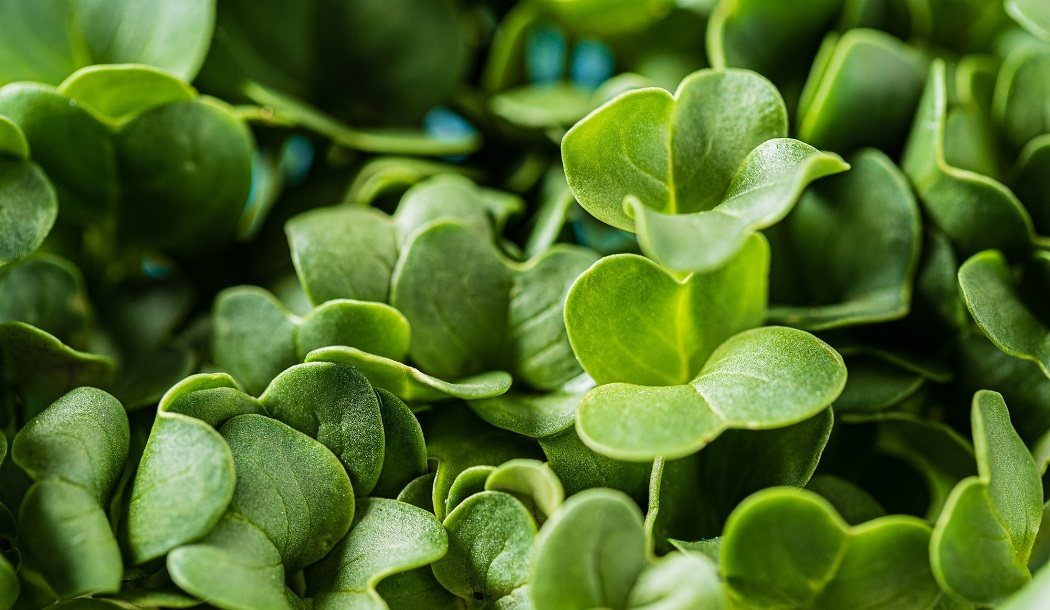 These days, if you wander around your local farmer’s market you’re bound to see at least one table, if not five more, filled with colorful microgreens.

Microgreens are simply very young plants, usually just around two weeks old. Chefs praise them for their beautiful color and rich flavor – but there’s more to them than good looks and taste. Now, some nutrition experts believe their nutrients are more effective than some mature vegetables when it comes to fighting diseases like cancer.

For the uninitiated, microgreens are smaller than the “baby greens” like spinach and kale that you find at the grocery store. However, microgreens are bigger than sprouts, such as mung bean, broccoli, and sunflower sprouts that are frequently used in salads.

I have to confess, they’re a new category to me:  a halfway house between sprouts and “babies.”

Microgreens are grown from vegetable seeds and then harvested shortly after the appearance of cotyledon leaves — those first two leaves that open after a plant pushes above the surface of the soil. Occasionally microgreens are harvested even earlier, after just one set of the first true leaves of the plant unfold.

The edible microgreen is cut right above the soil line, typically between ten and 14 days after planting.

Either way, harvesting and eating microgreens is done early on in the growing game.The edible microgreen is cut right above the soil line, typically between ten and 14 days after planting. And this is important, because the younger these plants are, the more effective they may be in curtailing major diseases like cancer.

Up to 40 times more nutrients!

For years, microgreens have been the focus of nutrition-minded folks as well as chefs in fine-dining establishments who like the taste and appearance.

Lately though, the exceptional nutrient levels of microgreens have caught the attention of a number of health institutions. In a study published recently in the Journal of Agricultural and Food Chemistry, researchers found microgreens have four to 40 times more nutrients than mature versions of the same plant.

In fact, the nutrient levels were so high that shocked researchers ran their experiments multiple times just to make sure they’d made no mistake!

A large part of the nutritional profile of microgreens includes high levels of antioxidants such as vitamin C, vitamin E, beta carotene, quercetin, flavonoids, and polyphenols. As I’m sure you know, antioxidants help your body eliminate free radicals.

Of course, there’s some variation in terms of which plants have which nutrients. Red cabbage microgreens appear to have the highest levels of vitamin C, while radish and green daikon microgreens have the most vitamin E.

Researchers marvel at the nutritional impact of microgreens since the tiny seeds have barely any exposure to light and yet the nutrient compounds are ready to go. It flips the concept that plants are like a fine wine that gets better with age.

A study published earlier this year in the journal Antioxidants looked at the effect of microgreens on colon cancer. Researchers studied broccoli, kale, mustard, and radish microgreens and found that every one increased reactive oxygen species production and decreased glutathione.

While sometimes this is a bad thing, increasing reactive oxygen species production only hurts healthy cells if the increase is beyond normal, healthy levels that are necessary for healthy cell function.  It appears this increase was within those healthy levels and as a result, triggered apoptosis (death for the cancer cells).

As cancer cells died, this reduced the growth and spread of tumor cells. The researchers concluded that a daily serving of microgreens (combined with a balanced diet) could prevent diseases like colon cancer.

In another study on microgreens from Australia’s Rural Industries Research and Development Corporation (RIRDC), researchers examined several microgreens for anti-cancer potential. Researchers calculated what they called an “anti-cancer score” based on each microgreen’sglucosinolatecontent.

Glucosinolates can spark a detoxification process in the body that fends off cancer cells. In this particular study, broccoli and red radish microgreens were at the top of the list as far as fighting cancer cells, followed by kale microgreens and pea shoot microgreens.

The microgreens with the highest overall nutritional content include red cabbage, green daikon radish, and cilantro, all of which boast extreme concentrations of vitamins C, K, and E, along with a host of carotenoids.

Because microgreens are so delicate, they’re best eaten raw and aren’t recommended for cooking. Eating them raw is also the best way to maximize nutrition.

If you have a backyard garden remember that not all plants should be harvested early and consumed as microgreens. Anything from the nightshade family, such as peppers, potatoes, tomatoes, or eggplants should be avoided since they contain toxic alkaloids– nightshade plant sprouts are actually poisonous!

Other than avoiding nightshades, just be aware that microgreens have a very short shelf life once harvested, about two to five days, and should be rinsed thoroughly before eating, simply because the dark, wet, crowded conditions ideal for microgreen growth could help breed bacteria.