This Sweet & Juicy Summer Treat Fights Cancer on Many Fronts 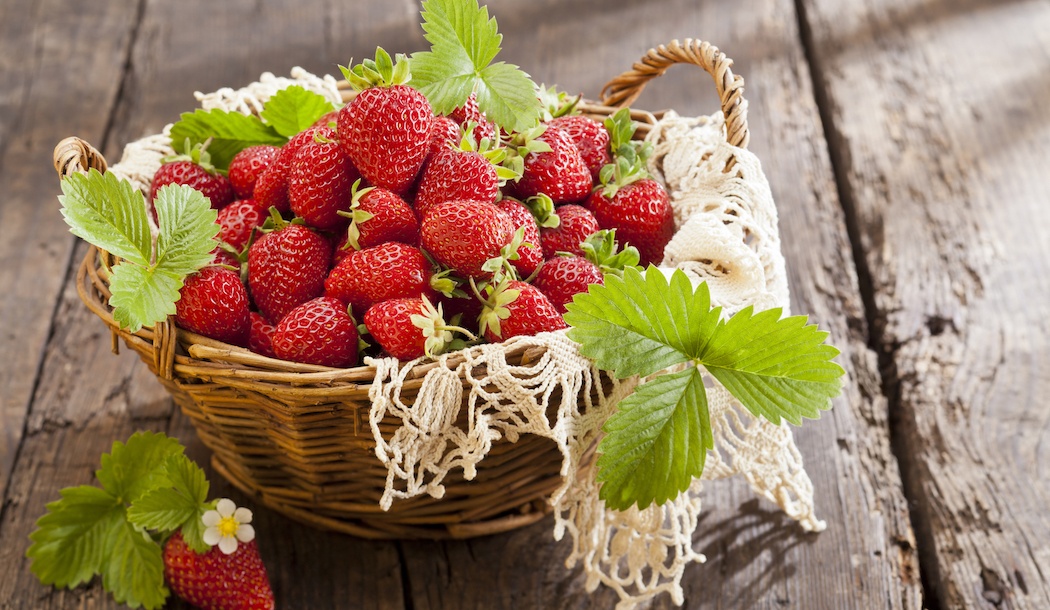 “The findings were heralded as groundbreaking,” writes physician and New York Times bestselling author Michael Greger, in an editorial in a leading cancer journal.

And yet in the media there was silence.

He continues, “Why isn’t this headline news? If there was, instead, some new drug that reversed cancer progression, you can bet it would be all over the place.”

Since he wrote his piece in 2012, other research groups from the US and Europe have confirmed the enormous potential of strawberries to act as anti-cancer agents.

Strawberries are in season right now, so head to the nearest fruit stand or farmer’s market and load up on the following health benefits. . .

In 2016, a review of the health benefits of strawberries was published in the Journal of Agricultural and Food Chemistry. The juicy red berries are:

That’s an impressive line-up for a single fruit.

Strawberries can claim all these accolades because they contain so many different nutrients and plant compounds. These molecules build up in your tissues and work in harmony to prevent disease and promote well-being.

Based on laboratory and population studies, here’s a quick rundown on just a few of the compounds in strawberries and the benefits of each:

Vitamin C is an effective antioxidant and scavenger of free radicals, with many population studies showing that the more people eat, the lower the incidence of cancer in general and cancers of the stomach, respiratory system, upper digestive tract, and lower uterus, in particular.

Anthocyanins: Long-time readers of this newsletter have heard me rave about these nutrients many times. Anthocyanins give many types of berries their beautiful color, but perhaps more important are their outstanding health properties.

That’s quite a bunch of ant-cancer benefits, and a good reason to include these pigments in your diet on a daily basis. Our sister company, Green Valley Natural Solutions, offers a powerful anthocyanin supplement called TheraFlex ACN, to make sure you have plenty of these nutrients every day.

Ellagic acid: Strawberries are a rich source of this phytochemical. Ellagic acid helps protect and repair DNA, slow tumor growth and spread and induce apoptosis. It’s been shown to be a broad spectrum “medicine” that acts against many different types of cancer. As a sidelight, raspberries are also rich in ellagic acid.

Quercetin: Strawberries are rich in this plant pigment that is a potent antioxidant, inhibits inflammation, modulates the immune system, has antibacterial and antiviral properties, suppresses growth and spread of malignant cells and induces apoptosis.

Kaempferol: This flavonoid has been demonstrated to reduce the risk of cancer. Population studies show the more kaempferol people eat, the less their incidence of cancer. It acts as an antioxidant, and modulates key cellular pathways linked to inflammation, angiogenesis (formation of new blood vessels that feed cancer), apoptosis and metastasis. It does all this while preserving and protecting normal cells.

Half the people who tried it became cancer free

Dr. Greger, the fellow I quoted at the start of this article, was referring to a clinical trial carried out by researchers at the Division of Medical Oncology at Ohio State University. Their work was published in the Journal of the American Association for Cancer Research.

In an earlier study in rodents, the research team had found that freeze-dried strawberry powder inhibited growth of precancerous lesions in esophageal squamous cell carcinoma (SCC). The esophagus is the pipe that takes food from your throat down to your stomach. The findings motivated the scientists to see if they could produce the same results in humans.

Since China has the world’s highest incidence of this form of cancer, they enrolled 75 Chinese adults with precancerous lesions in the esophagus. These were divided into two groups. One took 30 grams, and the other took 60 grams of the strawberry concentrate mixed in water every day for six months.

This is the equivalent of eating over a pound of fresh strawberries a day – something most of us are never likely to do, and a good example of the value of food supplements.

When the six months was up, the scientists found that although the lower dose did not make any significant difference, the higher dose reversed the condition in four out of five of the people in that group.

Most lesions that had been rated as moderate at the beginning regressed to mild — or vanished completely. Half the group became disease free.

How does that compare to the typical American who suffers from this pathology? Most people already have advanced esophageal SCC at the time of first diagnosis. Most of them don’t live a year. The five-year survival rate is only 13%. So the Ohio group may have stumbled on a simple way to prevent and reverse the disease in its early stages.

The lead author of the study, Tong Chen, MD, PhD, is enthusiastic. “We are very excited about this result. I think this study is very important because we found that strawberries may decrease the histological grade of precancerous lesions and also may reduce some cancer-related events including cell proliferation, inflammation and gene [activity].”

This study focused on one kind of cancer, but other research teams have looked at other types. . .

Prevents the growth of breast cancer

In 2016, scientists from Italy, Spain, Mexico and Ecuador collaborated to test the biological activity of polyphenol-rich strawberry extract on invasive and aggressive A17 breast cancer cells both in vitro (cultured in a petri dish) and in vivo (in living organisms).

In vitro, they found the strawberry extract decreased cell viability and division, inhibited migration, reduced the expression of genes involved with invasion and metastasis, yet at the same time stimulated expression of a good gene that suppresses the spread of cancer to the lymph.

For the in vivo model, mice were divided into two groups. One group was given a standard diet while the other was fed an enriched diet, 15% of which was strawberry extract. A month later the mice were injected with A17 breast cancer cells.

Five weeks later the enriched group showed a significant reduction in tumor weight and volume, and the spread of tumors to nearby tissues had come to a dead stop.

Study co-author Maurizio Battino said, “We have shown for the first time that strawberry extract, rich in phenolic compounds, inhibits the proliferation of breast cancer cells in vitro and in vivo models.

While the studies I’ve cited focused on just breast and esophageal cancer, I suspect that strawberries are a broad-spectrum cancer-fighter – the same way most natural cancer fighters are. They aren’t pharmaceutical “designer molecules” targeted at one function.

The health benefits of strawberries are powerful, but there is one major downside. You’ve got to buy organic. In this case, I just don’t think conventionally grown berries are an option.

The United States Department of Agriculture found that, of all fresh produce, strawberries were the most likely to be contaminated with residues from pesticides. Some of these chemicals have been banned in Europe because of their links to cancer.

20% of samples tested had ten or more residues, with the worst offenders having 22. Somebody out there in farm country is being very aggressive at spraying strawberries.

The Environmental Working Group (EWG), a non-profit, non-partisan organization, ranks strawberries no.1 on their “Dirty Dozen” list for 2018. That’s right: it’s the most contaminated type of produce in the whole country.

According to Sonya Lunder, senior analyst at EWG, “What’s worse [than pesticides], strawberry growers use jaw-dropping volumes of poisonous gases to sterilize their fields before planting, killing every pest, weed and other living thing in the soil.”

Another reason to choose the organic variety is because they have higher levels of vitamin C, antioxidants and phytonutrients.

And researchers at the Swedish University of Agricultural Sciences gave us a third reason.

How and where to buy

Strawberries are in season right now across the middle belt of the lower 48 and will be available through June as the growing season moves north.

These days you can get organic strawberries in supermarkets year-round, although the quality varies.  I have had good luck with the Driscoll brand of organic berries grown in California. Other brands tends to lack flavor.

Wherever you get them, strawberries have just about the shortest shelf life of any produce I know – even if refrigerated. They’re best if eaten same day and for sure I figure on eating them within 48 hours.

If they have dark or brown spots already in the store they’re not going to last long. And unfortunately if you buy them green they don’t ripen on the shelf. What you see is what you get.

I think the freeze-dried strawberry powder used in some of these studies sounds like a good option. I might try it, considering the results. At this point, I don’t know the best sources for this item.