This Unique Sea Animal has a Secret to Combat Cancer 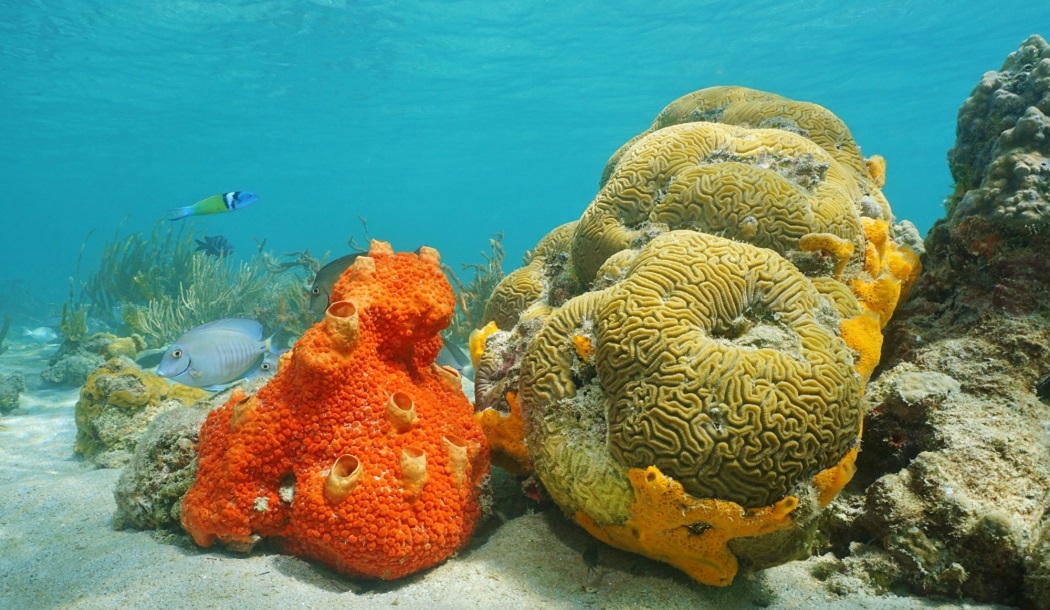 Science classifies this ocean discovery as an animal, yet this animal doesn’t have a head, arms or even any internal organs. In fact, this animal lives on the ocean floor and stays in one place pretty much its whole life.

I’m talking about a sea sponge.

Sea sponges boast a wide variety of shapes, sizes and colors, and have porous bodies that resemble its name.

Research shows these curious creatures have a special ability to produce unique compounds that can fight cancer. Two are already approved for cancer treatment, and there’s potential for many more.

To understand the cancer-fighting benefits of sea sponges, first you need to know more about their biology.

The marine sponge is the simplest form of multicellular animal. There are over 9,000 named species of sponge, but marine biologists are certain many thousands more are just waiting to be discovered.

A sponge’s lifecycle begins with fertilized eggs that hatch into larvae. The larvae float as plankton until they find a suitable place on rocks, shells or the sea floor to settle and grow into adult sponges.

Some sponges have been found living in the deep sea, as far as five-and-a-half miles below the ocean’s surface.

Adult sponges can vary in size, with the largest yet discovered as big as a minivan. Scientists found the gargantuan sponge in 2016 in the waters off the shores of the northwestern Hawaiian Islands.

Sponges have remarkable resistance to disease

To survive, sea sponges filter out plankton, bacteria and oxygen from the water that flows through them.

Since they don’t move or have an innate immune system, they are vulnerable to predators and dangerous pathogens. So they’ve developed a wide range of compounds called secondary metabolites to defend against life forms that could harm them.

Unlike primary metabolites, such as proteins, fats, and sugars, which are essential to sustain life, secondary metabolites are not essential. However, by being either directly toxic to predators or acting as a deterrent by tasting bad, they provide the sea sponge with the ability to survive.

Scientists have identified about 8,000 novel chemicals with unique properties within sea sponges, of which at least 60 have the potential to protect against or act against cancer.

In fact, sponges themselves do not develop cancer, probably because they have very efficient antioxidant and detoxification systems that can counteract cellular damage.

So far, few extracts from sponges have been tested for their ability to prevent cancer, but the ones that have been studied display strong antioxidant and free radical scavenging properties. Studies show they can prevent DNA damage and promote DNA repair.

Researchers discovered the sea sponge named Tectitethya crypta in the Caribbean Ocean in the 1950s and have studied its medicinal qualities ever since.

Scientists isolated two chemicals, spongothymidine and spongouridine, that in 1969 were turned into a drug, cytarabine, used to treat leukemia. This became the first marine-derived drug approved to treat cancer.

Today, the chemotherapy medication is used to treat acute myeloid leukemia, acute lymphocytic leukemia, chronic myelogenous leukemia, and non-Hodgkin’s lymphoma. It kills cancer cells by stopping them from making and repairing the DNA they need to grow and multiply.

The same pair of chemicals was also part of the breakthrough drug AZT, first administered in the 1980s for people with AIDS.

In 1986, Japanese scientists isolated eight anti-tumor compounds called halichondrins from the sponge, Halichondriaokadai, located off the Pacific coast of Japan. One of the eight, Halichondrin B, was said to exhibit “remarkable” anti-tumor activity in animal testing.

Eribulin is a microtubule inhibitor.

One promising new discovery, reported in the Journal of Natural Products in February, comes from the Acanthostrongylophoraingenssponge found in Manado Bay, Indonesia.

The sponge makes a molecule called manzamine A, which was found to block the growth of four different cervical cancer cell lines at relatively low concentrations.

A research team led by the Department of Drug Discovery and Biomedical Sciences at the Medical University of South Carolina found manzamine A targets and decreases a protein called oncoprotein SIX 1 that’s highly expressed in many types of cancer, including cervical cancer.

This action restores expression of the p53 tumor suppression gene as well as p21, another protective protein, to prevent cancer cells from growing and spreading.

Manzamine A is the first compound known to inhibit this protein in cervical cancer, which is why lead researcher Dr. Mark Hamann is so excited about the findings. “This is a highly exciting new application for a molecule that has earlier shown significant potential for the control of malaria and has good drug-like properties.”

This is not Dr. Hamann’s first foray into the world of sponges. His lab has also been studying molecules in Latrunculiaaustini, a green golf-ball-sized sponge located in the deepest, darkest ocean areas off the coast of Alaska.

This sponge’s chemicals are not related to anything known on land or even in tropical shallow-water marine environments.

One of the molecules is called aleutianamine, inspired by the Aleutian Islands off the Alaskan coast. It was tested on pancreatic and colon cancer cells and the results were published in the Journal of the American Cancer Society last year.

“This is absolutely the most active molecule against pancreatic cancer that we see,” Dr. Hamann commented. “Although there is still much work to be done, it marks the first key step in the discovery and process of developing a treatment.”

If it turns out to be effective, the news will be exciting for sure. Pancreatic cancer is nearly always fatal, and there are few effective treatments.

A little goes a long way to stop cancer cells

Another promising chemical, leiodermatolide, was isolated from a deep-water sponge of the genus Leiodermatium, off the coast of Florida.

Scientists at the Oceanographic Institute at Florida Atlantic University found that leiodermatolide was highly potent, inducing programmed cell death or apoptosis in cancer cell lines at extremely low concentrations. This was demonstrated in metastatic melanoma, pancreatic, colon, breast, and brain cancers (glioblastoma), as well as lymphoma.

Like eribulin, it combats cancer by inhibiting microtubule assembly, but it was found to do so in a unique way compared to other microtubule inhibitors.

The scientists were so surprised by this discovery that they followed up with a study in mice with pancreatic cancer. Leiodermatolide reduced tumor size in the study group compared to untreated control mice as well as another group treated with gemcitabine, one of the main chemotherapy drugs used to treat pancreatic cancer.

Lead author, Dr. Esther Guzmán, was very optimistic saying, “Given the uniqueness of its mechanism of action, its potency, its selectivity for cancer cells, and its in vivo [in the body] efficacy, leiodermatolide is an extremely interesting compound that merits further studies to determine its therapeutic potential for addressing some of the most devastating forms of cancer.”

Sponges from the China Sea
work against aggressive cancer cells

A research group from Tianjin Medical University has also been investigating anti-tumor agents in marine sponges.

They isolated smenospongine from marine sponge Dactylospongia elegans, which lives in the South China Sea, and reported that it prevents the growth of leukemia cells.

Their most interesting discovery is stellettin B, isolated from the marine sponge Jaspisstellifera.

They tested the extract on 39 human cancer cell lines in nine different forms of cancer. It proved to be highly potent against glioblastoma and lung cancer cells, but only showed weak toxicity against normal cells.

The scientists concluded that stellettin B is so potent at low doses “it might become a promising drug candidate for NSCLC cancer therapy in the future.”

There are 131 completed or ongoing trials of sea-sponge-derived compounds, but only a small number are underway to test the two most promising drug candidates.

The first is E7974, a synthetic analog of hemiasterlin, an anti-cancer compound isolated from Hemiasterella minor, a sponge found in the coastal waters of New Guinea, north of Australia.

Despite being tested in patients who no longer responded to conventional treatment, the therapy stabilized disease in a third of the patients.

The other is plocabulin, isolated from the Madagascan sponge Lithoplocamialithistoides. In a completed trial of 20 patients with advanced tumors, one showed a partial response and three achieved disease stability.

In a review of marine sponges with anti-cancer potential, the authors wrote that in the clinical trials, “…usually, these compounds are characterized by a slightly better overall or progression-free survival than the reference-listed drug,” i.e the standard drug used for the particular tumor being treated.

I hope some treatments soon become available to the public as a result of all these exciting sponge discoveries. It is frustrating that the medical industry moves so slowly, and that its main preoccupation, usually, is to modify the natural substances somehow so they can be patented and sold as pharmaceutical drugs.

We desperately need a new standard for approving drugs, whereby it is only necessary to prove a treatment is safe – leaving the public and practicing doctors to determine whether it is effective. Currently both safety and efficacy have to be proven, the process takes forever, and – if anything – the drug ends up being approved with neither safety NOR efficacy having really been proved at all.

If doctors could legally treat patients with non-patented natural substances as long as they’ve been proven safe, the pace of medical progress would race ahead like a rocket.