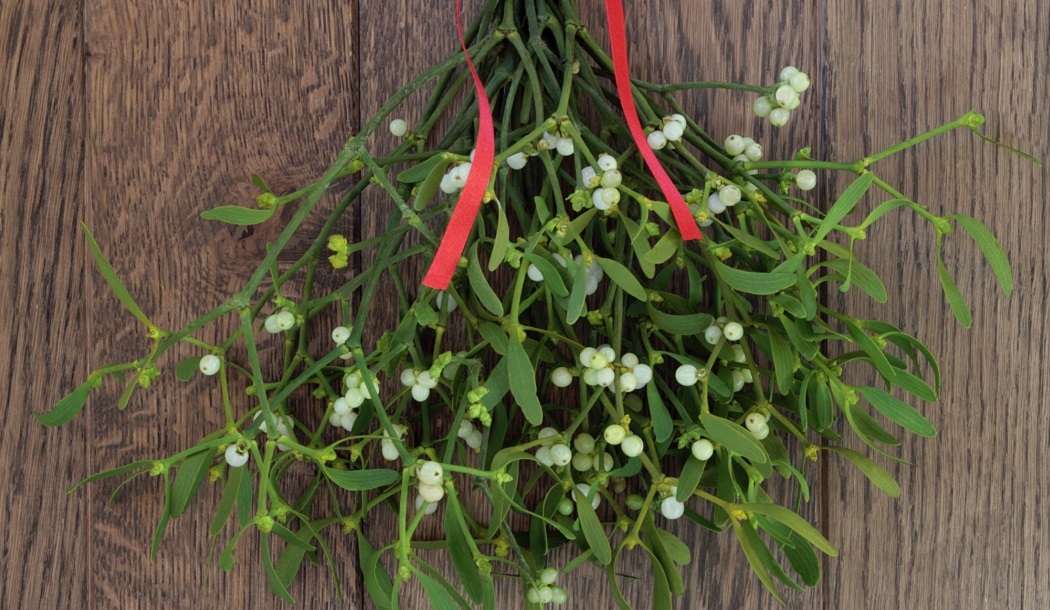 Legend has it that kissing under mistletoe at Christmas time is good luck. And refusing a kiss means bad luck is sure to find you. The Druids who came up with this stuff don’t leave you a lot of options!

Mistletoe’s also been a symbol of a truce between enemies and used as protection to ward off evil spirits and the misfortune they bring.

You can also add “potent cancer killer” to mistletoe’s resumé – and this time it’s not superstition.

One variety of mistletoe plant is known for its ability to battle cancer and extend the lives of cancer patients. At least that’s what happened for Ivelisse Page.

In early 2008, Ivelisse Page was a 37-year-old mother of four. In September of that year, doctors diagnosed her with colon cancer and removed 15 inches of her colon, plus 28 lymph nodes. Sadly, three months later, the cancer had spread to her liver.

Ivelisse underwent further surgery to remove 20 percent of her liver, but refused chemotherapy. (Wisely, in my view. It doesn’t do any good for late-stage cancer patients.) Instead, a doctor on her team recommended mistletoe therapy (MT) by a Johns Hopkins physician, one of the few doctors in the U.S. who offered it.

This is remarkable in and of itself.

As someone who has talked to or heard from hundreds of cancer patients over the years, I can tell you conventional doctors rarely go on record recommending an alternative treatment to their patients, regardless of the science or success stories behind it. Some few will whisper an alternative idea in your ear, while asking you not to say where you got it.

Ivelisse was also fortunate because her oncologist was willing to endorse MT despite never hearing about it before and believing whole-heartedly in his chemotherapy regimen.

As soon as Ivelisse started on MT, she felt better. Her color and energy improved. In fact, her colon cancer all but disappeared, and her health transformation was so great that she’s still alive and well all these years later.

After her recovery, Ivelisse and her husband wanted to help others experience the benefits of MT, so they founded a nonprofit called Believe Big. It raises money for mistletoe clinical trials (which cost millions) and also helps connect patients with opportunities to get mistletoe therapy.

How does a poisonous,
parasitic plant help you beat cancer?

While it’s hard to imagine mistletoe as anything other than a sweet holiday tradition, The Smithsonian Institute observes that mistletoe is a semi-parasitic plant.

Mistletoe sends its roots into the middle of trees and feeds on their sap. If the infestation is heavy, mistletoe can kill the tree’s branches, or even the tree itself.

Mistletoe also has poisonous leaves and berries that contain phoratoxin, which can leave people sick for up to three days. Yet when used as medicine in appropriate doses and under a doctor’s care, mistletoe is safe.

The raw plant should NOT be consumed by mouth. A special extract of it is administered intravenously, and some doctors give it in homeopathic (very tiny) doses.

The PDQ Integrative, Alternative, and Complementary Therapies Editorial Board wrote that “few side effects have been reported from the use of mistletoe extracts.”1

Even better, MT can be quite a Godsend for cancer patients, whether they’re pursuing conventional or alternative therapies, or a mixture of both. No wonder MT is one of the most-used, non-conventional cancer therapies in Europe.

It was discovered in the 1920s, when medical practitioner Rudolf Steiner began using MT to treat cancer. Many of Steiner’s ideas were pretty far out there, but in this case he was right. Before that, people as far back as 2,000 years ago have used mistletoe leaves and sticks as an herbal remedy for seizures, headaches and arthritis.

What mistletoe can do for you

Mistletoe’s primary benefit for cancer care is its ability to boost quality of life. The research shows that mistletoe can help you live with cancer longer and with a better quality of life, even if the disease does not regress.

This is an important point and a significant difference between how conventional doctors in America approach cancer treatment compared with many doctors in Europe.

Here, conventional doctors believe you have to kill all of the cancer—get rid of it completely — if you want to survive. Meanwhile, doctors in Europe understand that cancer can be a chronic condition that you can learn to live with. If you can stop the growth of cancer and stop it from interfering with the body’s most vital functions, you can live a very good life with a tumor for years, even decades, and perhaps even die from something else entirely long after your cancer diagnosis.

Most of the studies done on MT show a positive effect, researchers say, because of the plant’s special immune-enhancing compounds. Research in both animals and people has shown that MT can:

Help for many types of cancer

Researchers have studied MT for use in treating a variety of different cancers including:

A 2009 review of clinical research found that mistletoe could boost cancer survival rates in people with different cancers. One study consisted of 220 patients with breast, ovarian, and lung cancer. Results showed that those given MT experienced less fatigue, insomnia, anorexia, and nausea.5Other studies suggest that MT inhibits tumor growth and supports the immune system.6

As far as side effects go, some people have slight reactions. A mild fever is considered a positive reaction (similar to hyperthermia treatment, where body temperature is raised to kill cancer cells), and is often followed by a profound sense of well-being.

According to the National Cancer Institute, mistletoe is a “well-studied” alternative treatment.

Yet the FDA in its “wisdom,” declared that these studies have “major weaknesses” and that we shouldn’t rely on them. But you may not have the option to wait till every study on mistletoe therapy is 100 percent complete. You might actually need this treatment today. I consider it an adjunct therapy to use in conjunction with a number of other therapies, not all by itself.

In fact, that’s my standard advice for alternative cancer remedies in general: Use a whole bunch of them together rather than count on one as a miracle cure. There is no such thing.  Nearly every cancer patient and all the dozens of alternative cancer doctors we’ve interviewed will tell you the same thing.

For now, it’s challenging to find mistletoe treatment options in the U.S. There are a number of alternative doctors who do offer it, either by IV delivery methods or subcutaneous injection.

Alternatively, you can try to enroll in a clinical trial. You could also travel to Europe, where as I mentioned earlier, MT is far more common. Our book German Cancer Breakthrough is a guide to the German, Austrian and Swiss alternative cancer clinics we have visited and recommended. A number of them offer mistletoe therapy. A few of them have closed but most are still going strong.

It’s important to note that doctors individualize MT for each patient. Thus, you should stay under the care of a doctor for MT and not attempt to treat yourself at home.

Some of the European clinics will send you a home with a supply of the extract, and all you have to do is find a friendly physician to give you infusions, so you can continue your treatments after you return to the States. This may be a little challenging, but it can be done.