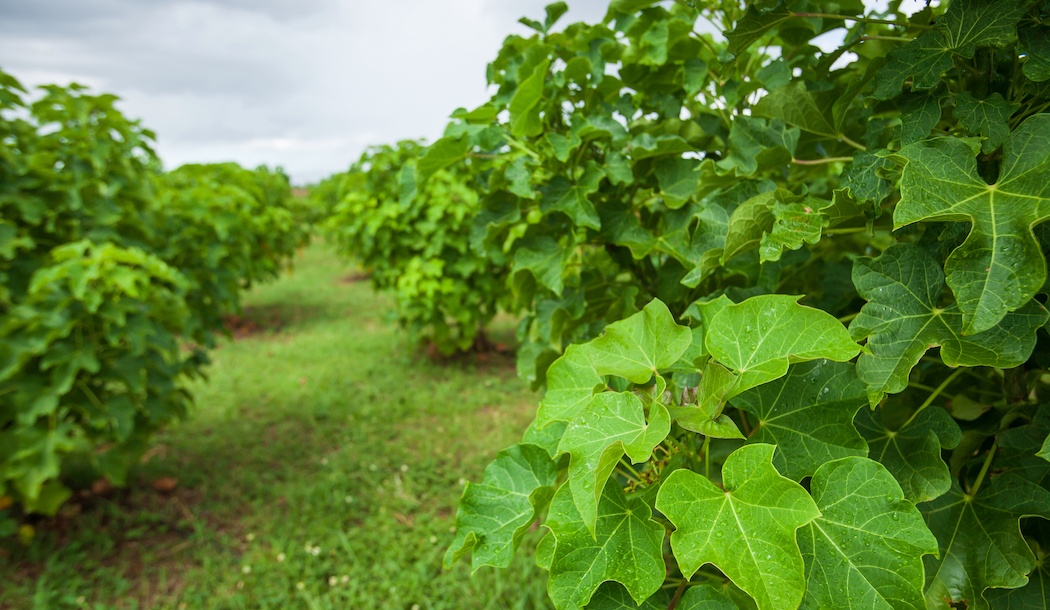 During the last three decades up to half of all approved drugs, including those for cancer, have been derived from nature.

One plant that’s come to the attention of cancer researchers grows in the Caribbean and is called Jatropha curcas.

In a recent breakthrough, chemists can now synthesize a compound in the plant that’s able to fight a previously drug-resistant cancer protein that helps cancer cells multiply and spread.

Let’s take a look at the discovery…

Because jatropha is able to grow under a variety of conditions, it’s now cultivated not only in the Caribbean but also in Africa and Asia and in almost all tropical and sub-tropical countries.

Jatropha, a small vigorous bush, is usually planted as a hedge (living fence) by farmers because it’s not eaten by most animals so it keeps them away from crops. Researchers are also exploring the use of jatropha as a bio-fuel.

However, its medicinal properties may be the most important, and they go back centuries.

A plant with multiple healing properties

The word jatropha is derived from the Greek words jatros (doctor) and trophe (food), and was used to denote the plant’s healing abilities. The plant has other names, one of which is the purging nut, because it’s used as a purgative or laxative.

Jatropha as a medicine was first mentioned in a medical text in 1789. However, jatropha was popoular in folk medicine centuries before that and was commonly prescribed for many different health conditions.

For example, the plant was reported to have antibiotic and anti-inflammatory properties. The sap that flows from the stem helped control the bleeding of wounds. Oils from the plant were widely used to treat skin conditions and to soothe rheumatic pain, while also being prescribed for arthritis, gout, jaundice and malaria. The roots were used as an antidote to snake bites. Root extracts could also help stop bleeding gums and were believed to help treat cancer.

But would this popular folk remedy stand up to modern-day scientific testing?

Folk healers on the right track

A study from China in 2003 found a chemical called curcin from jatropha seeds had “an obvious antitumor effect” on human stomach, liver and mouse spleen cancer cell lines.

More recently, researchers from Nigeria, Italy and Germany decided to join the study of jatropha in the fight against cancer.

The research team interviewed two traditional healers and a traditional pediatric pharmacist in Nigeria to provide information on the different applications involving jatropha in the treatment of various diseases including cancer.

For the laboratory research they dried and ground the root to obtain crude extracts. They isolated 14 compounds from them and then tested all extracts on three cell lines routinely used for anti-cancer activity testing.

“The extracts,” wrote the researchers, “strongly reduced cell growth of tumor cells…a result consistent with the knowledge of the application of these plant extracts in traditional medicine, especially to cure/ameliorate cancer.”

Impressed by jatropha’s anti-cancer activity, Mingji Dai, professor of chemistry at the Purdue University Center for Cancer Research, West Lafayette, Indiana, focused his attention on one particular group of chemicals in this plant: curcusones. We already encountered one of these, curcosone B, a moment ago in the Thai study.

There are also nine other curcosones ranging from A to J. They all belong to a class of chemicals called diterpenoids. Jatropha curcas is the only known source of these compounds to date.

“We were very interested by these compounds’ novel structure,” Prof. Dai explained. “We were intrigued by their biological function; they showed quite potent anti-cancer activity and may lead to new mechanisms to combat cancer.”

Professor Dai and his research team studied all the curcusones and found curcusone D was very effective at shutting down breast cancer cells, but there’s a problem obtaining this naturally-derived chemical.

“In nature, the plant doesn’t produce a lot of this compound. You would need maybe as much as 100 pounds of the plant’s dry roots to get just about a quarter teaspoon of the substance — a 0.002 percent yield.”

Having an effective anti-cancer agent isn’t of much value if it’s impossible to get enough of the raw material needed to treat people! The answer is to synthesize it, enabling sizable amounts to be manufactured, and that’s just what Prof. Dai’s team was able to accomplish in a cost-effective and efficient way.

Curcusone D is believed to have the potential to combat many forms of cancer in which a protein called BRAT1 is found. These include some forms of breast, colorectal, prostate, lung, liver and brain tumors, among others.

BRAT1 regulates the response to DNA damage and repair in cancer cells. Cancer cells’ rapid growth means they make a lot of DNA. By damaging the DNA and also preventing the ability of cancer cells to repair this damage, their ability to grow is stunted.

BRAT1 had previously been deemed drug-resistant for its chemical properties, but in breakthrough research curcusone D was bonded to the protein and then validated as the first BRAT1 inhibitor.

“Our compound can not only kill these cancer cells, it can stop their migration. If we can keep the cancer from metastasizing, the patient can live longer.”

As powerful as curcusone D has shown itself to be, it may be even more so as part of combination therapy. It was tested alongside an approved DNA damaging drug and found to be much more effective.

“Many of our most successful cancer drugs have come from nature. A lot of the low-hanging fruit, the compounds that are easy to isolate or synthesize, have already been screened and picked over.

“We are looking for things no one has thought about before. Once we have the chemistry, we can build the molecules we’re interested in and study their biological function.”

A plant that already caught professor Dai’s attention led to another breakthrough in 2019.

In China, three fir trees called Abies beshanzuensis are the last of their kind on the planet.

Professor Dai tinkered with molecules found in the bark, and from this created a synthetic analog which he named compound 30. This turned out to be a potent and selective inhibitor of SHP2, a protein involved in a number of key signaling pathways connected with tumor formation and an increasingly popular target for cancer treatment.

According to professor Dai, “This is one of the most important anti-cancer targets in the pharmaceutical industry right now, for a wide variety of tumors. A lot of companies are trying to develop drugs that work against SHP2.”

Other drugs only loosely bind to the protein but compound 30 forms a more secure and long lasting bond.

By combining compound 29, a slightly modified version of compound 30, with Etoposide, a DNA-damaging drug used to treat multiple types of cancer, they developed a new strategy with promising results.

“Compound 29 alone doesn’t kill cancer, but when you combine it with Etoposide, the drug is much more effective,” Prof. Dai said.

“This could improve some of the cancer drugs used today, and it also tells us something new about the function of POLE3.

“People weren’t targeting this protein for cancer treatment before, but our findings offer a new strategy for killing cancer cells.”

Professor Dai intends to continue his hunt for novel plant compounds. We will, no doubt, report on his new successes in the future.