Why Dogs Can Detect Cancer So Accurately – Cancer Defeated 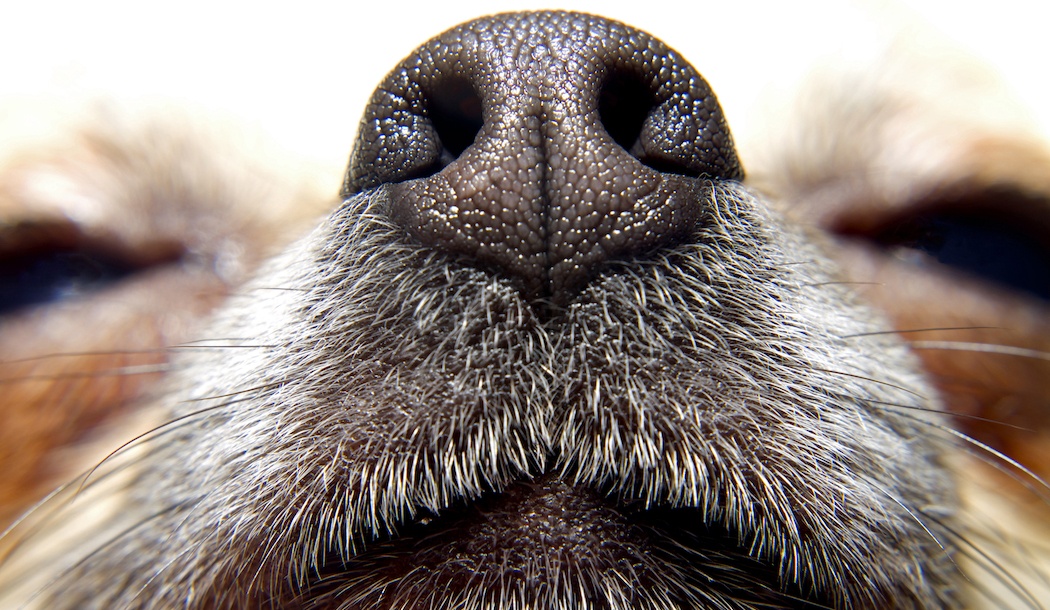 In the health field, dogs warn of impending attacks of narcolepsy and migraines, low blood sugar spikes in diabetics, and early-stage Parkinson’s disease. But perhaps the medical condition they’re best known for sniffing out is cancer.

Unlike the human nose, which has a mere five million scent glands, a dog has between 125 and 300 million, depending on the breed. This equates to having a sense of smell that’s up to 100,000 times more sensitive than ours!

Some dog owners are grateful to their pets for using their highly sensitive nostrils to alert them of a dangerous cancer that needs urgent attention.

One such owner is Tanya Hibberd from Southampton in England.

Sapphire, her Siberian husky, persistently pawed at the same spot on her chest for a month before she checked her breast and found a lump that revealed a three centimeter-sized tumor. After treatment she is now cancer free. Tanya said, “Sapphire saved my life.”

Stephanie Herfel of Wisconsin is another grateful husky owner who said, “I would not be here today” if it wasn’t for Sierra. Stephanie experienced pain and bloating in her lower abdomen but was told in the emergency room that it was probably a benign ovarian cyst. Sierra disagreed with their diagnosis.

“She put her nose on my lower belly and sniffed so intently that I thought I spilled something on my clothes,” Stephanie told the Milwaukee Journal Sentinel. “She did it a second and then a third time. After the third time, Sierra went and hid. I mean hid!”

After this reaction she sought out a second human opinion who diagnosed stage 3C ovarian cancer. After successful treatment Sierra repeated the sniffing and acting frightened two years later and she did the same a further year later. On both occasions it was confirmed the cancer had returned. Unfortunately, Stephanie Herfel has since passed away, but her doctors remain inspired by her story.

One of Stephanie’s oncologists, Dr. Howard Bailey, at the University of Wisconsin Cancer Center, responded to the dog’s reaction by saying, “It’s believable. It comes down to proteomics, or the study of proteins.

“Cancer occurs and advances based on some of the abnormal proteins it produces, and differing smells are often a result of different proteins. So, it’s not surprising that dogs, which are much more sensitive to smell than we are, could detect a change.”

There are so many other examples of dogs detecting cancer that this ability is not in doubt. In studies, dogs have been shown to detect lung, colon, breast, ovarian, cervical, bladder, thyroid, prostate, and skin cancers.

But for dogs to be put on full time medical duties they would need to be more accurate than current methods of diagnosis. Researchers wanted to see if they are.

A trained eight-year-old black Labrador retriever, whose owner wishes she remain anonymous, successfully identified which samples were cancerous and which were not in 33 out of 36 breath groups and in 37 out of 38 stool groups, with the highest detection rates among patients with early-stage disease.

The authors concluded their research by writing, “This study shows that a specific cancer scent does indeed exist and that cancer-specific chemical compounds may be circulating throughout the body. These odor materials may become effective tools in CRC screening.”

Current methods for diagnosing lung cancer have low degrees of accuracy so four beagles were trained for eight weeks to see how well they could distinguish between blood serum samples taken from patients with malignant lung cancer and those taken from healthy controls.

One dog, however, named Snuggles, adamantly put her paw down, refusing to take part, but the other three were co-operative and were able to distinguish with 97 percent accuracy the cancerous samples.

Lead author of the study, Thomas Quinn, said, “Right now it appears dogs have a better natural ability to screen for cancer than our most advanced technology. Once we figure out what they know and how, we may be able to catch up.”

In another study, a seven-year-old Golden Retriever was put through its paces to see if it could accurately distinguish samples of lung cancer patients of all tumor stages in urine and breath from healthy controls. The dog didn’t disappoint, correctly predicting 40 out of 41 cancer samples, corresponding to an overall detection rate of 97.6 percent.

Canines to be replaced with sensors

With their incredible sniffing abilities and such impressive results, dogs could be recruited for this important task, but realistically, it’s not going to happen.

Nell Barrie, science information officer at Cancer Research UK, said, “…we’re still a long way from understanding exactly what they are detecting. It would be extremely difficult to use dogs as part of routine testing for cancer.”

Dr. Hideto Sonoda, who led the CRC study, said, “It may be difficult to introduce canine scent judgement into clinical practice owing to the expense and time required for the dog trainer and dog education.

“It is therefore necessary to identify the cancer specific volatile organic compounds [smells] detected by dogs and to develop an early cancer detection sensor that can be substituted for canine scent judgement.”

Dogs may not be given a place in screening but there’s another creature that might fit the bill, with the added advantage that it doesn’t need to be taken for “walkies.”

A six-legged future for cancer screening?

The olfactory system isn’t just important to dogs, it’s also crucial to the survival of ants.

In the first study of its kind, scientists in France trained a species of black ant called Formica fusca to sniff out cancerous cells in a Petri dish. They proved to be fast learners, taking just 30 minutes to differentiate between cancerous cells and healthy ones, making it a much quicker and cheaper option than training dogs.

Dr. Baptise Piqueret, first author of the study, explains how it works, saying, “To train an ant, we use a training protocol called associative learning where an odor (e.g., the cancer odor) is associated to a reward, such as a sugar solution.”

After training, the ant will seek out the odor of cancer cells to get the reward and ignore the healthy, non-odorous cells. Ants were also successfully trained to distinguish between two different types of breast cancer cell lines.

The ants proved they were a match for any dog, so will a colony of ants be set on patients in future screening?

Dr. Piqueret responded to this question, saying, “A swarm of ants running toward you might be a good way to train for the 100 meters in the next Olympic Games, but not for medical diagnosis!

“We plan to use body fluids, such as sweat, urine, or saliva from a patient that contain the cancer odors to train and test our ants. With this protocol, the ants will never be in contact with the patients.”

Thank goodness for that!