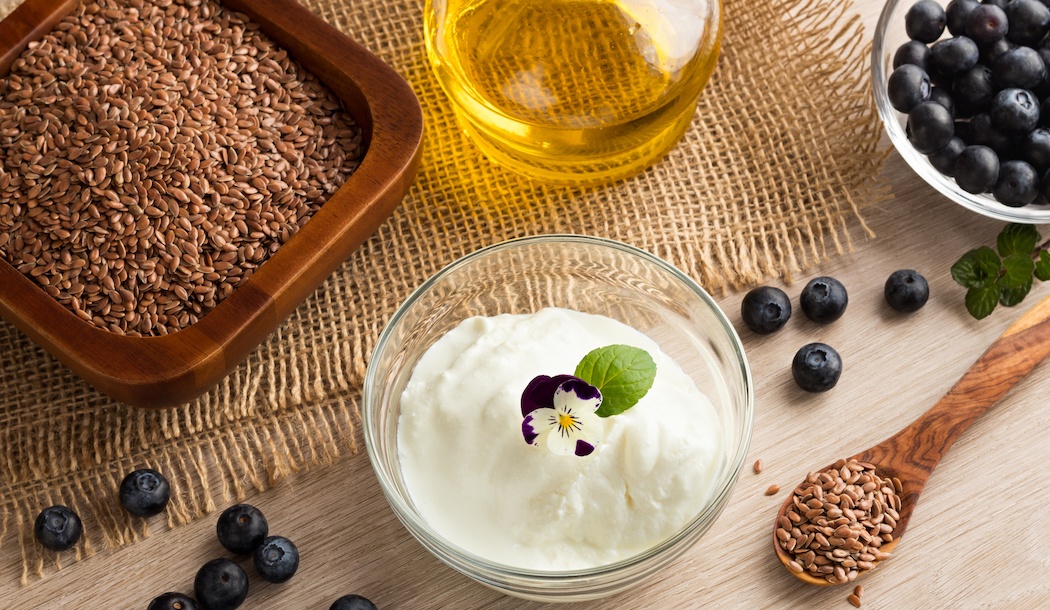 Dr. Johanna Budwig is a legendary figure in the world of natural approaches to treating cancer. She created a simple formula to defeat the disease. All you have to do is blend two common foods together.

Sounds too good to be true? That’s what I thought, so much so that I did not include it in my first book on the best natural cancer treatments.

Boy, was I wrong. I was soon convinced this treatment is powerful and it works. For some people it really is that simple to defeat cancer. It’s not a magic bullet – no such thing exists as far as I know, but in most cancer cases, these foods can create a strong foundation of healing that you can build upon. Here’s why….

Dr. Budwig was a German chemist, pharmacologist, quantum physicist, naturopath and inventor who dedicated her entire life to science and healing.

Dr. Budwig’s interest in medicine started when she was a young girl at the Protestant sisterhood where she became a deaconess. This involved caring for the sick, weak patients at the diaconate hospital.

Later, she worked as a research assistant to Hans Kaufmann, a renowned lipid (fat) chemist and his work made a lasting impression.

Dr. Budwig became an expert
in fats and human health

By the late 1940’s Dr. Budwig had developed a process by which fats could be broken down into their constituent parts and analyzed. Following this breakthrough, she became the first scientist to present evidence for the existence of both saturated and unsaturated fatty acids.

As a rising star in the world of fatty acid chemistry she was offered a post at the prestigious Federal Institute for Lipid Research as an expert consultant in 1951.

A year later she published research showing commercial fats had harmful effects on the body. She also went on to demonstrate in animal studies the different biological effects of omega-3 fats on living tissues for the first time. It was then that she moved her attention to cancer.

Sulfhydryl groups play important roles in biochemistry, particularly in the cell membrane. Some of the better known are the sulfur-containing proteins, cysteine and methionine. An absence of the factors needed for cellular respiration would produce a low oxygen environment in the cell, and Dr. Warburg was able to demonstrate that a 35 percent reduction in oxygen causes a cell to turn cancerous.

She considered the omega-3 group to be the most important and settled on flax oil, which contains 18 to 20 percent linoleic acid, and 58 to 60 percent linolenic acid.

For the sulfhydryl groups she chose cottage cheese as the best protein source to supply these. It has the advantage that – when blended together correctly with the flax – it also makes the omega fats easily soluble for far better absorption into the bloodstream.

Together, the combination of flax and cottage cheese would restore oxygen within the cell.

Now, about that flax…

Wearing her physicist’s hat, Dr. Budwig emphasized the importance of electron-rich, negatively-charged natural foods. One of the best examples of these is seeds after they’re exposed to energy from the sun.

Their negative charge within the cell membrane creates a strong attraction to the positively charged sulfur compounds in the protein found in the cell nucleus.

She spoke of the need to “recharge our ‘life battery’ [with] electron-rich, unsaturated fats…The host of symptoms which arise from an empty battery is always accompanied by the appearance of what we call tumors or cancer.”

This benefit does not occur with commercially processed, heated oils, which she regarded as “highly toxic.”

Dr. Budwig described the interplay between these positively and negatively charged particles as “our life element” and it is “this energy” that heals cancer.

Unfortunately, her criticism of commercially produced fats didn’t please the growing and increasingly powerful margarine industry, nor the pharmaceutical companies.

When Dr. Budwig stated publicly in a radio interview in 1956 that using growth-inhibiting treatments like radiation or hormonal drugs is not the correct way to treat cancer, she alienated herself from the research and academic community. Despite the backlash, Dr. Budwig was undeterred.

In a much later lecture, she again spoke out against conventional cancer treatments, saying the “methods used in hospitals today to treat tumorous diseases most certainly accelerate the patient’s demise, aggravate the disease, and can even cause cancer in healthy patients.”

Although she took up the study of medicine because she wanted to treat patients, her training was cut short because, like the rest of the academic community, her mentor turned his back on her.

So, as a medical degree was ultimately denied to her, in order to see patients – cancer patients in particular – she trained as a naturopath. In 1966, Dr. Budwig was finally able to put her oil-protein diet into practice with patients for the first time and did so for more than 20 years, seeing over 2,500 of them.

Dr. Budwig wrote that, according to a physician who kept records of her cases, “my success was over 90 percent, and this too was achieved in cases where allopathy (conventional medicine) failed.”

Reports flooded in from grateful patients, but she became an easy target for critics because of the lack of verified scientific evidence to support her unconventional protocol.

Dr. Budwig wrote, “Various highly trained and educated individuals are dismayed and irritated by the fact that serious medical conditions can be cured by cottage cheese and flaxseed oil.”

An oncologist from Florida who investigated her work was Dan C. Roehm. In the Townsend Letter for Doctors in July 1990, he wrote, “What she (Dr. Budwig) has demonstrated to my initial disbelief but lately to my complete satisfaction in my practice is: CANCER IS EASILY CURABLE, the treatment is dietary/lifestyle, the response is immediate; the cancer cell is weak and vulnerable; the precise biochemical breakdown point was identified by her in 1951 and is specifically correctable, in vitro (test-tube) as well as in vivo (real)… “

Robert E. Willner, M.D., Ph.D. from Miami, author of The Cancer Solution (1994), writes, “Numerous, independent clinical studies published in major medical journals world-wide confirm Dr. Budwig’s findings…Over 40 years ago Dr. Budwig presented clear and convincing evidence, which has been confirmed by hundreds of other related scientific research papers since, that the essential fatty acids were at the core of the answer to the cancer problem…

“You will come to your own conclusions as to why this simple, effective prevention and therapy has not only been ignored — it has been suppressed!”

Two German physicians, Bernd Belles, M.D. and Gerd Belles ,M.D., who both specialize in holistic cancer approaches, wrote, “…the one element which clearly stands out as having the greatest importance and forming the basis of all holistic tumor therapy is the oil-protein diet according to Dr. Johanna Budwig.

“If this nutritional regimen is implemented without deviation, there is a chance of recovery at every stage of tumor development (which we have personally witnessed in our practice!)”

Lothar Hirneise started life as a psychoanalyst and later a highly successful entrepreneur. After losing a friend to cancer he investigated alternative therapies and traveled the world to bring knowledge of unknown yet effective treatments to the people of Germany.

Mr. Hirneise met Dr. Budwig when she was 89 and became a huge supporter of her work. He collaborated with her on several books and lectures until her death in 2003 from complications that arose after breaking her hip. He was able to read original letters sent to her from cancer survivors and met many former patients in person.

“Everything together,” he said in an interview, “has convinced me that the Oil-Protein Diet (The Budwig Diet) is one of the best, if not the best nutritional treatment in the whole world.”

He went on to form the International Oil-Protein Diet Foundation to preserve and promote the diet in its original form and not as amended by others who claim to teach or prescribe the Budwig protocol.

He also co-founded the 3E-Center in Germany where patients can learn, practice and receive the diet and techniques they need to recover their health.

Putting the Budwig diet to the test

Mr. Hirneise also wrote up a trial on 73 late-stage patients with a wide variety of cancers where conventional treatments had failed, and thereafter, were only offered palliative care. All were given from weeks to 12 months at most to live.

All attended the five-week course run by the 3E center between June 30, 2008 and March 30, 2009. As well as the oil-protein or Budwig diet, they received detoxification techniques, mind therapies, and energetic treatments.

By March 30, 2010, all should have died according to the opinion of their oncologists, but in fact only 31 were deceased—that’s less than half.

What’s more, seven patients with metastases and one patient with inoperable glioblastoma (brain tumor) now had no tumors visible on scans.

Key elements of the Budwig protocol

Other foods that are allowed on the diet include buckwheat, brown rice, millet, salad vegetables, cooked vegetables, herbs, coconut oil, fruit and vegetable juices and teas.

Dr. Budwig also regarded sunlight as important. “The sun’s rays are very much in accord with humans. It is no coincidence that we love the sun,” she wrote. “The resonance in our biological matter is…strongly attuned to absorb the sun’s energy.”

She also emphasized environmental factors, writing, “It is of utmost importance that a person is seen as a unity of mind, body, and soul. … I am still certain that if a woman is in a very bad marriage or relationship … then I cannot help her with quark [cottage cheese] and flax seed oil. All three aspects go together in humans.”

She also disapproved of synthetic textiles and foam mattresses as these deplete the body’s energy.

“The surrounding environment and living conditions must be as organic as possible. The way a person lives, for example, if they get regular sleep, is very important. Many cancer patients go to bed far too late and are up in the morning far too early.”

Those interested in immersing themselves in the Budwig program, which includes diagnostics, meals, holistic therapies, seminars and accommodation in Germany, should visit the 3e-centre website.

There is also a treatment center in Spain which claims to hold true to the principles which Dr. Budwig espoused. To learn more visit https://budwigcenter.com/ .The site includes scores of positive testimonials from grateful patients.