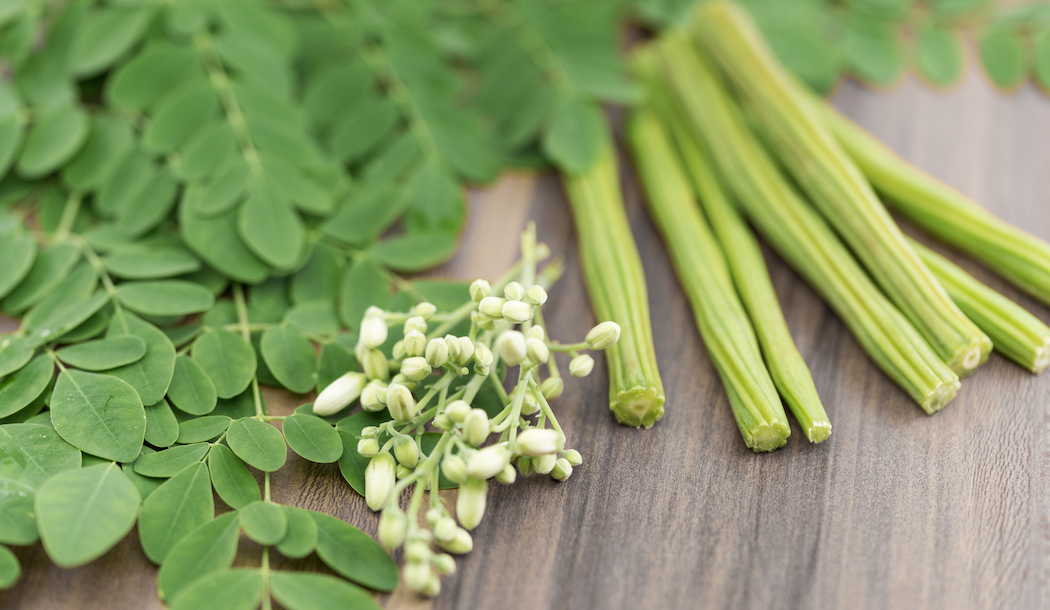 Many health-conscious people kick-start their day with a smoothie and throw in a green powder to get even more vitamins, minerals, and antioxidants. These green powders often contain extracts of leafy greens, vegetables, fruits, seaweed, grasses, herbs and more.

But with so many different formulas on offer and health benefits varying based on the ingredients they contain, how do you decide what to go for?

The answer could be to opt for the extract of one single green plant. Not only is it a nutritional powerhouse and true superfood, but it’s a potent anti-cancer agent to boot.

There are thirteen species of moringa but the one that’s usually ingested and has the most research behind it is Moringa oleifera.

The tree, also known as drumstick tree, or horseradish tree, is indigenous to sub-Himalayan tracts of Northern India and is used to prevent 300 diseases in traditional Indian (Ayurvedic) medicine.

It was only in the 1990s that word spread of the tree’s nutritional and medicinal properties beyond India. This led to the tree being grown and its products consumed throughout almost all tropical countries.

Moringa became so popular that an entire health conference was dedicated to it. The first international conference on the plant was held in 2001. Thereafter, an increasing number of scientists started to research the remarkable plant. They demonstrated moringa to be one of the most nutrient dense of all plants. As a result, the tree has been dubbed “miracle tree,” or “natural gift.”

Among its natural gifts are its many anti-cancer properties.

In a new review published in February, researchers from India described Moringa oleifera as “a powerful anti-cancer agent.”

In laboratory culture studies, the leaves activated apoptosis, a process that induces cancer cells to commit suicide. It achieves this by upregulating expression of the BAX gene, which stimulates apoptosis and downregulates BCL-2, which depresses it. This process enhances the activity of caspase 3, an “executioner” enzyme that has a key role in apoptosis.

When the leaves, bark and seed extracts were tested against breast and colorectal cancer cell lines, the seeds had little anti-cancer activity, but the leaves and bark displayed dramatic cancer-fighting ability. They boosted apoptosis by a remarkable seven-fold in breast cancer and several-fold in colorectal cancer.

The researchers also noted “a striking reduction (about 70 to 90 percent) in colony formation as well as cell motility…upon treatment with leaves and bark.”

Moringa leaf extract has been tested in cellular studies in cancers of the lung, bile duct, head and neck, skin, breast, cervix, colon, prostate, and pancreas.

The research clearly demonstrates that moringa can kill cancer cells by apoptosis, reduce their ability to divide, protect against DNA damage, lower inflammation, and boost antioxidation.

Another mechanism of action is the inhibition of NF-kappaB, a protein complex that contributes to inflammation and cancer. Cell studies also show moringa extracts increase the effects of chemotherapy drugs.

In an animal model, moringa helped prevent chemically induced tumor formation by increasing activity of the powerful antioxidant, glutathione. Rodent studies have also been performed in liver, colorectal and laryngeal cancer. These showed strong reductions in either the incidence of tumors or tumor volume.

Moringa can offer strong protection because of the vast number of beneficial compounds it contains.

Moringa’s many nutrients include a sugar compound called niazimicin, which in one study is described as having potent anti-tumor promoting activity. Other protective plant chemicals include carotenoids, phenolic acids, flavonoids, tannins, saponins, alkaloids, and glucosinolates.

Moringa also contains many potent antioxidants: quercetin, kaempferol, apigenin, luteolin, myricetin, vitamin C, vitamin E, beta carotene, isothiocyanates, polyphenols and rutin. The leaves contain a large amount of protein and all essential amino acids. They’re also a plentiful source of polyunsaturated fatty acids including omega-3 and omega-6. The leaves are rich in calcium, potassium, zinc, magnesium, iron, and copper, and contain vitamins B1, B2 and B3.

Thanks to all of these nutrients, moringa can play a role in supporting healthier blood sugar—which is critical if you want to fight cancer.

The connection between both type I and type II diabetes and cancer has been clear for decades, but it was only firmly established after a major review published in 2018.

The study found women with diabetes are 27 percent more likely to develop cancer, while the risk for men rises by 19 percent. Type II diabetics are twice as likely to develop liver or pancreatic cancer and run a higher risk of developing colon, bladder, and breast cancer. It’s also estimated that one in five cancer patients has diabetes.

Lifestyle changes to prevent diabetes have poor compliance so a simple method to reduce the risk that involves nothing more than taking a natural remedy would be of profound value.

In the Ayurvedic system of medicine, moringa leaves are commonly used to treat diabetes. To see if science backs this up, researchers from Japan carried out a systematic review of moringa in its treatment. Their analysis of 42 rodent studies found that blood glucose – as well as triglycerides (blood fats) and total cholesterol – were significantly reduced.

They believe that if the results of these rodent studies could be translated to humans, “it could have a profound impact” in lowering the risk of people with pre-diabetes ending up with the full-blown condition.

Although there have been no human studies of moringa in the treatment of cancer, two small studies have been conducted in diabetes.

One hundred patients with type II diabetes took a daily tablet containing 98.34 percent dehydrated moringa oleifera leaf powder. After 90 days, the blood glucose level after meals was reduced by up to 28.57 percent and glycosylated hemoglobin (HbA1c), which measures how much sugar has been in the blood over the previous two to three months, was reduced by 7.4 percent.

In the second study, nine men and six women who were all diabetic and obese, took moringa leaf powder with food for 40 days. Blood glucose was lowered in every patient with a significant fall of 8.9 percent on average.

The seeds, leaves, and flowers have antimicrobial properties. In fact, studies show extracts from seeds of moringa can be used for water purification. Flower and leaf extracts also act against pathogenic worms and internal parasites.

If you’d like to add moringa to your daily health regimen, it’s available in various forms including capsules, powder, seeds, seed oil, and tea.